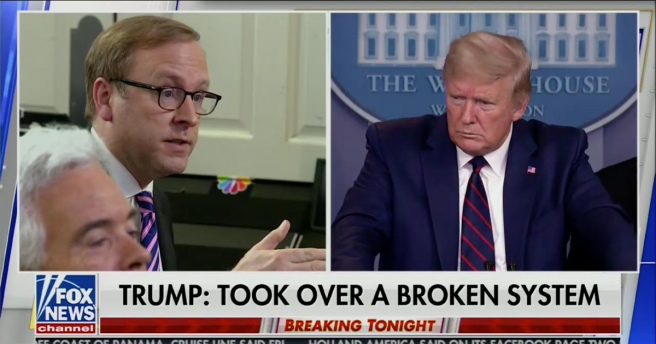 President Trump encourages while the media and Democrats discourage. Your choice.

Karl asked the president if “everybody who needs a ventilator will get a ventilator” after Trump officially ordered General Motors to make them under the Defense Production Act.

He continued, “We’ve distributed vast numbers of ventilators and we’re prepared to do vast numbers. I think we’re in great shape. I hope that’s the case. I hope that we’re going to have leftovers so that we can help other people, other countries.”

“Everyone who needs one will get a ventilator,” Karl pressed Trump.

“Look, don’t be a cutie pie, okay? You know, ‘everyone who needs one,'” the president shot back. “Nobody has ever done what we’ve done. Nobody has done what we’ve been able to do. And everything I took over was a mess. It was a broken country in so many ways and in so many ways other than this. We had a bad testing system. We had a bad stockpile system. We had nothing in the stockpile system.”

He added, “So I wouldn’t tell me what, you know, being a wise guy.”

Gosh. Why didn’t Jonathan Karl ask about these ventilators?

New York Governor Andrew Cuomo acknowledged Friday the state did have a stockpile of unused ventilators, despite his complaints the federal government was not sending enough.

Cuomo responded to a comment from President Donald Trump on Twitter that there were thousands of ventilators in New York not being used.

“Yes, they’re in a stockpile because that’s where they are supposed to be, because we don’t need them yet,” Cuomo said. “We need them for the apex, the apex isn’t here, so we’re gathering them in a stockpile.”

Cuomo’s comments demonstrate there is not an immediate shortage in ventilators in the city, despite alarming reports.

“We don’t need them today, because we’re not at capacity today, that’s why they’re not deployed because they’re not needed,” Cuomo said.

The governor has repeatedly complained that the federal government is not sending enough ventilators to New York.

On Tuesday, Pence said that the federal government had sent 2,000 ventilators to New York and an additional 2,000 more on Wednesday.

But on Friday, Cuomo explained expert projections showed he would need up to 140,000 beds and 40,000 ventilators.

“I don’t operate here on opinion, I operate on facts and on data and on numbers and on projections,” he said.

In an interview on Fox News on Thursday night, Trump appeared skeptical that New York would need 40,000 ventilators.

“I have a feeling that a lot of the numbers that are being said in some areas are just bigger than they’re going to be,” he said.

And, then ABC News’ Jonathan Karl continued the attack on President Trump concerning ventilators by being a smart a**…err…”cutie pie”.

A very stupid question to ask considering that New York was hoarding ventilators and their arrogant whining governor was aware of it.

The arrogance and TDS of Main Stream Media Reporters like Karl leaves a stench in my living room when I watch them attack the president on TV. President Trump is doing everything humanly possible to provide medical equipment and medicine to Americans suffering from the Chinese Coronavirus.

However, the Trump Derangement Syndrome being carried by the Far Left Democrats and the Main Stream Media does not allow them to acknowledge that fact.

We no longer have an objective “Fourth Estate”.

None of these fake news stories, Democrat-heavy polls, photo-shopped pictures, and stupid Occupy Democrat Memes blaming Trump for the Coronavirus on Facebook are making any difference to average Americans.

The Democrats and their Propaganda Arm, the Main Stream Media, as a result of their own regional bias toward the major metropolitan areas on the East and Left Coasts, which has been obvious to average Americans for the last several decades, continue through their sheer arrogance and hatred for President Trump and the traditional American Way of Life, to distance themselves from the people whom they continue to claim that they “love”…Average Working Class Americans.

Yet still, they expect us to believe the Fake News which they are desperately trying to distribute in a vain attempt get Trump out of office, and which Liberal Trolls are posting on Social Media ad nauseam, so that they and the rest of the “useful idiots”, in their shared madness, can regain the White House, even though all of their Primary Candidates do not stand a chance against President Donald J. Trump..

Americans do not care what Main Stream Media “journalists” think.

That is why President Trump’s popularity ratings continue to rise in the polls.

The Main Stream Media in this country are no more objective and professional than the Far Left Trolls and Bots who attack him every day and night on his Twitter Account.

Trump was right in stopping his daily press briefings when Sarah Huckabee Sanders was his Press Secretary.

See how the members of the Main Stream Media are acting out in these press briefings?

If all they want to do is grandstand and attempt to embarrass and somehow entrap Trump, I say do a video Press Conference and make them e-mail their questions in.

Although, it is pretty funny when the President shuts THEM down.

Although, I doubt Jonathan Karl appreciates the humor in the situation like we “Deplorables” did.