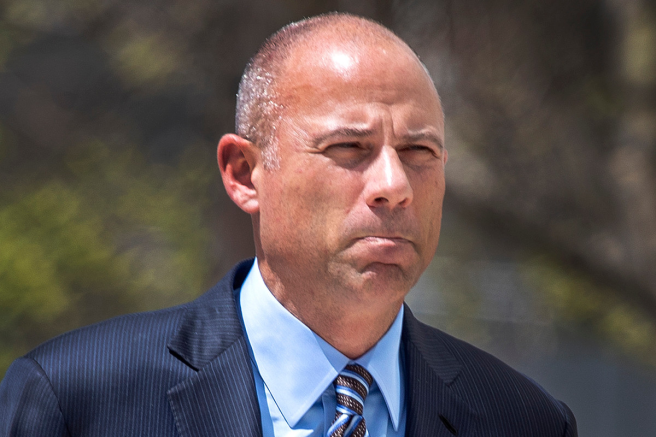 Brian Stelter and Joy Behar thought he could run for president in 2020. Now he’s going to jail.

A New York jury found Avenatti, 48, guilty on three counts, including extortion, wire fraud and transmission of interstate communications with intent to extort. He faces up to 42 years in prison and did not testify in the case against him.

Stelter told Avenatti on air, “Looking ahead to 2020, one of the reasons why I’m taking you seriously as a [2020 presidential] contender is because of your presence on cable news.”

At the height of Avenatti’s fame, he spent his rare time away from CNN’s greenroom partying with the network’s anchors while regularly appearing on late-night shows, MSNBC and “The View.”

Juanita Scarlett, a former aide to Andrew Cuomo, the Democratic governor of New York and brother of CNN host Chris Cuomo, once tweeted —  and then deleted – a photo of herself with Avenatti and another CNN host, Don Lemon, who apparently hosted a bash at his posh Hamptons home.

It’s unclear how many other CNN personalities were at Lemon’s “Sag Harbor soiree,” but it was clear Avenatti had a cozy relationship with the liberal network prior to his drastic fall from grace.

Michael Avenatti once attended a party at Don Lemon’s weekend home in the prestigious Hamptons area east of New York City, according to Juanita Scarlett.

CNN was even accused of downplaying Avenatti’s Nov. 2018 arrest and Stelter once admitted critics “have a legit reason to dunk on me” when he chalked up omitting a negative story about Avenatti from his newsletter to a mix up.

“After being called everything from a political and legal expert to the ‘man who could take down Trump’ and given hundreds of segments and hours of television time from both CNN and MSNBC, Michael Avenatti is headed to jail,”author and political satirist Tim Young told Fox News. “Not only has he proven himself to be a fraud, but he’s exposed the fact that these networks are willing to book literally anyone who confirms their Trump Derangement Syndrome.”

Young said Stelter’s theory that Avenatti was a legitimate contender for president shows the CNN pundit has a “complete lack of understanding of the media and political sphere” for valuing a now-convicted felon over most politicians in America.

“It’s an important reminder that people aren’t smarter than you or better judges of character just because they have a major media platform,” Young added.

CNN did not immediately respond to a request for comment.

MRC analysts Bill D’Agostino and Rich Noyes wrote in 2018 that there “no guest in CNN’s recent history who has been given as much free media exposure by the network as Avenatti” received.

Attorney Michael Avenatti was on CNN 74 times during a 10-week period in 2018.
But CNN wasn’t the only liberal network to parade Avenatti in front of the camera. Over the same 10-week period, Avenatti appeared on MSNBC 57 times, according to the study.

“On a single day [May 3 2018], MSNBC featured Avenatti a stunning seven times,” D’Agostino and Noyes wrote. “While CNN has been the friendliest network… MSNBC has been close behind.”

He was also asked about a potential run at the White House on ABC News’ “The View” in August 2018.

Back during the Stormy Daniels mess, I posted some background on Avenatti…

“Michael Avenatti is a high-profile American attorney, commentator, and entrepreneur who is based in Los Angeles. You can routinely see him on television and in the print medium as a professional pundit on a bunch of issues. He’s considered one of the foremost trial lawyers in America with victories across the country.

According to the biographical page on his website, he has been responsible as lead counsel for over 1 billion dollars in verdicts and settlements, including many which were well in excess of 10 million dollars.

Also according to his own biographical page on his website, during college and Law School. he worked at a political opposition research and media firm, which was run by Chicago Mayor, Clinton confidant, and former White House Chief of Staff, Rahm Emanuel. While with Emmanuel’s research and media firm, Avenatti worked on over 150 campaigns and 42 States, including multiple gubernatorial and Congressional campaigns, such as Joe Biden’s US Senate campaign.

3 years after graduating from Law School, he joined Greene, Broillet, & Wheeler, a Los Angeles boutique litigation firm. While he was there, he was spearheaded a successful idea theft lawsuit which involved, drumroll please, the reality show “The Apprentice”and its producer, Mark Burnett, as well as Donald Trump.

As an aside, it you look at contributions made in Santa Monica, CA, where Greene, Broillet, and Wheeler are located, to local Democratic Candidates, you will find several donations from lawyers with that firm.”

When you look at the rise and fall of Michael Avenatti, some unanswered questions remain about his involvement with Stormy Daniels.

Given his background with Democratic Campaigns and his previous legal action taken against President Trump, why wasn’t this all discussed on the Cable news Channels?

Probably for the same reason that Democratic Activists were allowed to serve on the jury for the trial of Roger Stone.

Nobody plays Chicago-style back room politics better than the Democratic Elite.

The Stormy Daniels trial and the ensuing fawning over by the Liberal Main Stream Media of Avenatti was all a part of another orchestrated scheme in the ongoing attempt by the Democrats to oust President Trump from the Oval Office.

This entire effort over the last three plus years to destroy Donald J. Trump is like something out of a Tom Clancy Spy Novel or Oliver Stone’s conspiracy movie about the assassination of President John F. Kennedy.

However, this twisted tale has not ended, yet.

The anger and despair of the Democrats runs too deep.

Just like Captain Ahab’s mission to destroy the great white whale, Moby Dick, I believe that the Democrats’ vendetta against President Trump will be their undoing.

Just as in the case of Michael Avenatti,