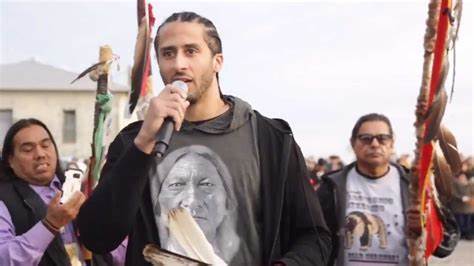 On a day when actual Americans were giving thanks, one attention-seeking ex-NFL Quarterback decided to show his ingratitude about being born in the Greatest Country on the Face of the Earth.

Former NFL player Colin Kaepernick had an odd way of celebrating Thanksgiving, attending an event that appeared to serve as a rebuke to the holiday and the United States.

On Thursday, Kaepernick spoke at the “Indigenous People’s Sunrise Ceremony,” also known as “Unthanksgiving,” on Alcatraz Island in San Francisco, California. The event is intended to celebrate the 50th anniversary of Native Americans occupying the famous island, which previously served as the site of a federal prison.

“Spent the morning at the Indigenous People’s Sunrise Ceremony on the 50 year anniversary of the Occupation of Alcatraz,” Kaepernick tweeted on Thanksgiving day.

“The US government has stolen over 1.5 billion acres of land from Indigenous people. Thank you to my Indigenous family, I’m with you today and always.”

Kaepernick is no stranger to controversy and has been out of the NFL since the 2016 season. He started a national firestorm when he decided to kneel during the national anthem before games to raise awareness about perceived social injustices across the U.S. He accused NFL owners in a grievance of blackballing him from the league because of the anthem protest, but the two sides settled earlier this year.

He tweeted a video of a man proclaiming that Native Americans were taking the land by “right of discovery.” The video also appeared to show him speaking to celebrants on the island.

“It’s been 50 years since the occupation,” Kaepernick said. “And that struggle has continued for that 50 years … It’s our responsibility to honor our ancestors and honor our elders by carrying on that struggle. Don’t let their sacrifices be in vain. That’s why it’s important for all of us to be here today — to show that we’re together, that we’re unified, that we have that solidarity. And I hope to spend many more of these with you.”

“Antebellum campaigns to establish Thanksgiving as nat’l holiday grew up alongside colonizationist efforts to remove free Black people from U.S. Nationalization advocates mobilized white fears of Black equality to build support for holiday,” he said in the post retweeted by Kaepernick.

Kaepernick released a hype video Monday, days after he worked out for a handful of NFL teams at an Atlanta-area high school in hopes of making a still-elusive return to the league.

The video showed Kaepernick launching passes to receivers during his workout at Charles Drew High School. It also included a message to the media after his workout that he was ready to come back and compete again in the NFL.

There have been conflicting reports on whether any NFL teams are interested in the quarterback after his midseason workout. ESPN reported Sunday that no teams have reached out to Kaepernick to work him out further, while his attorney appeared on Adam Carolla’s podcast last week and said at least two teams were interested. The attorney didn’t specify which teams.

Would you believe that back in 2017 GQ named this idiot their “Man of the Year”?

The same cover for the magazine “GQ:, also known as “Gentleman’s Quarterly”, had featured in bold print in the upper right corner the words “America’s New Heroes”.

When I asked my computer for the definition of that word, bing.com responded

a person who is admired or idealized for courage, outstanding achievements, or noble qualities: “a war hero”

At that time, I examined Mr. Kaepernick’s qualifications for that title.

“courage” – What inspired him to take a knee during the playing of the National Anthem at an NFL Game? Was he, in fact, kneeling because of some sort of perceived injustice to America’s black population by the men and women of America’s Municipal Police Forces, as alleged by those members of the NFLPA, who have been following his actions this year, like lemmings over a cliff in a Disney “Real Life Adventure” such as we grew up watching in our classrooms, decades ago?

The report from sports gossip blog Terez Owens states, “As the entire world knows by now, San Francisco 49ers quarterback Colin Kaepernick refused to stand for the National Anthem in Friday’s pre-season game against Green Bay because he was protesting ‘black oppression’ in the United States. We’re now hearing that it was actually his girlfriend Nessa’s idea for Colin to protest. Colin and his girlfriend, Nessa Diab, an MTV DJ, are still planning an Islamic-style wedding.”

“outstanding achievements” – Kaepernick’s mother gave him up for adoption. He was adopted by the Kaepernicks, a well-off white couple, who already had two children. He went on to play college football at the University of Nevada, where he was named the Western Athletic Conference Offensive Player of the Year twice and became the only player in NCAA Division I FBS history to amass 10,000 passing yards and 4,000 rushing yards in a career. After graduating, he was selected by the San Francisco 49ers in the second round of the 2011 NFL Draft.

Nice life, great sports statistics, but hardly “heroic”. The NFL Owners must not be that impressed, either, as he remains to this day, unemployed.

“noble qualities” – Showing a lack of respect for the national anthem and flag of the country which has given you the opportunity to make a ridiculous salary for playing a game which Americans grew up playing in their yards, is hardly an exercise in nobility.

Rather it is an act of petulance, brought about by a Liberal Popular Culture which has been molded and led by leaders who repeatedly tell young minds full of mush that America is a horrible, unjust nation, who is responsible for all the evils in this world.

During the Administration of Barack Hussein Obama, children and young adults, attending American Institutes of Learning from kindergarten to college campuses were taught by Liberal teachers and professors that America was “just another country” and to be a patriot was to somehow be close-minded, ignorant, and bigoted, not necessarily in that order.

Colin Kaepernick and those players who followed him in his disrespecting of our National Anthem cost the NFL an enormous amount of money in both advertising revenue and game attendance.

Lasting damage from which they have never really recovered.

No NFL Team in their right mind is going to sign Colin Kaepernick.

He is going to fade into obscurity just like the NBA’s Allen Iverson.

Iverson is a jerk, also…but at least he had talent.