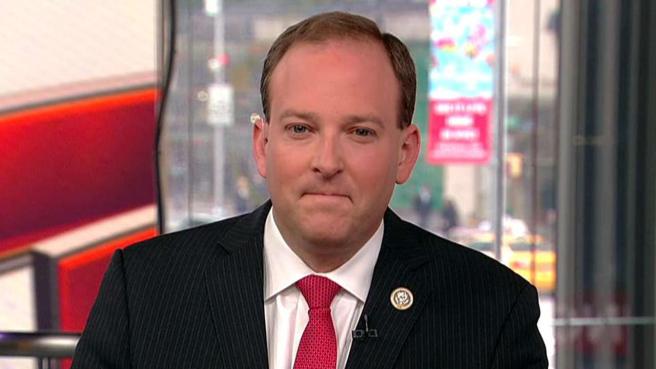 Voters are not swallowing what Schiff is selling. https://t.co/ors5MMHaJB

“If you remember March 22nd, 2017, he goes on another network, and he says that he has more than circumstantial evidence that President Trump colluded with the Russians. This is evidence that he hasn’t yet produced, [that] I haven’t seen, [former Special Counsel Robert] Mueller couldn’t find,” he continued. “He made up what he called a parody version of the [July 25] call transcript, but he only said that after he got called out.”

Schiff had attempted to clarify in September, “Of course, the president never said, ‘If you don’t understand me, I’m going to say it seven more times.’ My point is, that’s the message that the Ukraine president was receiving in not so many words.”

Zeldin also challenged Schiff for failing to disclose that his congressional team met in private with the whistleblower who sparked the impeachment inquiry. The Republican also said the facts of the case remained on the president’s side.

“He’s made claims during his opening statements and his closing statements — trying to write the world’s greatest parody… trying to connect dots that aren’t actually connected,” Zeldin added.

“He’ll say something’s a firsthand truth that shouldn’t be doubted and then you dig deeper and you realize it’s actually Ambassador [William] Taylor telling us that, Tim Morrison told him that [Amb. Gordon] Sondland told Morrison — the president told Sondland, give me a break… The facts are on the president’s side.”

He also said Congress should be passing the United States–Mexico–Canada Agreement, “but instead, he is trying to pay off the people who put the gavel in his hand.”

Schiff commented on the Democrats’ impeachment push during an interview earlier Sunday with CNN’s “State of the Union,” and said despite an “ironclad” case against the president, he couldn’t say if his party will impeach Trump or not.

“If the facts aren’t contested and your committee is writing up the report and you don’t, at least as of now, have any scheduled witnesses or depositions — do you think President Trump should be impeached?” host Jake Tapper asked.

“I want to discuss this with my constituents and my colleagues before I make a final judgment on it,” Schiff replied. “But, there are a couple of really important things we need to think about.”

Just as they did in the 2016 Presidential Campaign, the Democrats have underestimated the American People and what we will tolerate.

Living in their Beltway Bubble, the Democratic Hierarchy continue to view those of us living between the coasts in “Flyover Country” as inbred simpletons who should bow and scape before them.

One would have thought that they would have learned their lesson when American Businessman and Entrepreneur Donald J. Trump beat their Chosen One, Hillary Clinton, to become the first Citizen Statesman to win the Presidency in decades.

The Democratic Party’s ensuing national Temper tantrum over Trump’s victory actually made them double down on their arrogant out-f-touch view of average Americans living between the coasts.

The proof of what I’m saying is has been seen by millions of Americans for almost three years, as the Democrats have tried every falsehood they could think of to ruin President Trump and his entire family from a Russian Collusion Delusion to a Soviet-style Tribunal based on a fictional retelling of an actual phone call with the only “evidence” being the “testimonies” of arrogant bureaucrats.

As Rep. Zeldin said, the Democrats have been wanting to impeach Trump since his election, and their hatred of him has grown exponentially with each goal he has achieved since taking office.

The reason Rep. Schiff will not commit to impeaching Trump after promising that he and his fellow House Democrats would, is that the Dems’ internal polling shows that an overwhelming majority of Americans oppose impeaching President Trump. And, on top of that, the ratings for his 2-week Pubic Hearings were extremely low.

In other words, Americans are not buying the Democrats’ B.S.

Americans vote with their wallets.

Trump’s policies have delivered lower taxes and a booming economy.

The Democrats are promising higher taxes and Marxism.

Which would you choose?