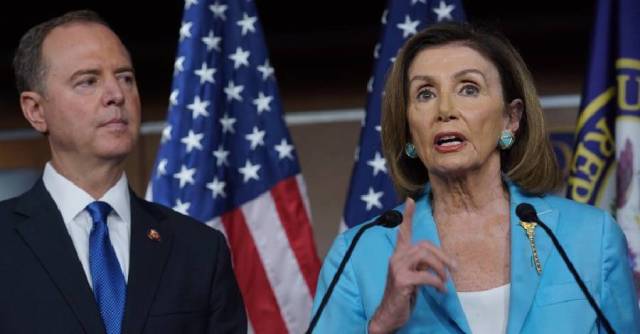 WATCH: Tulsi Gabbard: "Calls for impeachment really began shortly after Trump won his election, and as unhappy as that may make us as Democrats, he won that election in 2016." #DemDebate pic.twitter.com/ZiumZNjsJO

House Speaker Nancy Pelosi announced after meeting with the House Democratic caucus on Tuesday that there will be no vote — at least for now — on the launch of formal impeachment proceedings against President Trump.

“There’s no requirement that we have a vote, and so at this time we will not be having a vote,” Pelosi said. “We’re not here to call bluffs — we’re here to find the truth, to uphold the Constitution of the United States. This is not a game for us. This is deadly serious.”

The move was seemingly a boon for moderate Democrats in swing districts, who have been reluctant to have a formal vote in favor of the proceedings as the 2020 elections approach — even as several of them have also sought to appease liberal constituents by vocally backing the ongoing inquiry.

A congressional aide familiar with House Democrats’ discussions told Fox News that many House Democrats did not want to be seen as letting the White House dictate how the House conducted itself. Last week, the White House sent a fiery letter to House Democrats announcing that it would not cooperate with their inquiry, for several reasons — including that, contrary to past precedent, no formal vote had been held on whether to begin impeachment proceedings.

If Pelosi was really concerned about what the Constitution says, she WOULD have called for the vote by now, instead of holding these Soviet-style secret meetings in which only Democrats are allowed to attend and ask questions.

Following the United States Constitution is the farthest thing from Pelosi’s and her fellow Democrats’ minds.

Just as with any fascist movement, the desire of those Democrats who wish to turn America into a socialist nation is to achieve ultimate power. For only by possessing ultimate power will they be able to confiscate Americans’ guns and control average Americans or, in keeping with their Marxist ideology, the “Proletariat”.

The Far Left Democrats have proven, as Tulsi Gabbard admitted last night, that they do not care if they pass any legislation benefitting Americans.

SERVING AMERICANS IS NOT THEIR PRIORITY.

SERVING THEMSELVES THROUGH IMPEACHING PRESIDENT TRUMP IS.

And, therein lies the rub.

As I have written in the past, the Democrats effectively divorced themselves from average Americans some time ago, embracing the wishes of special interest groups, instead.

The Dems placed themselves in a bubble, embracing the “cool kids” on the east and west coast, while looking down their noses at average Americans living in which they referred to as “Flyover Country”.

…And it’s not surprising then they get bitter, they cling to guns or religion or antipathy toward people who aren’t like them or anti-immigrant sentiment or anti-trade sentiment as a way to explain their frustrations.

The Democrats’ arrogant view of average Americans has not abated since then…it has only gotten worse.

That arrogance cost her and the Democrats the Presidency.

I believe that Pelosi’s refusal to hold a vote on Impeachment is a combination of several things:

I fully expect the Democrats, in their arrogance, to continue their secret meetings for as long as they can.