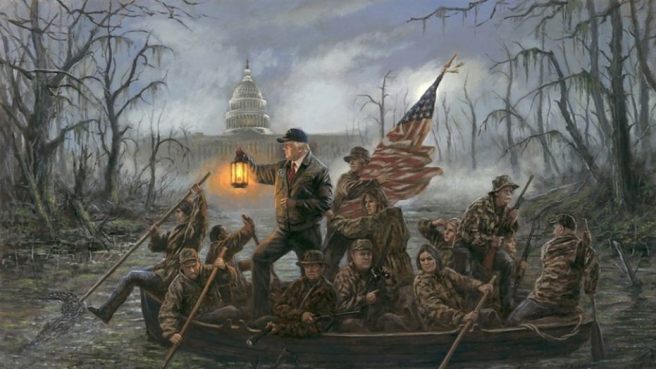 “The Five” remarked on the controversy at a staff meeting held at The New York Times on new ways to cover President Trump.

“They are not journalists, they are partisan activists,” said Jesse Watters in light of the transcript of a newspaper town-hall meeting published by Slate.
He added that the Times admitted they couldn’t take out Trump, and they aren’t that influential.

The report said that the Times is trying to figure out new angles to attack Trump. It also mainly focused on a dustup over a critically drubbed headline about Trump’s remarks in the wake of this month’s deadly mass shootings.

The Times summarized Trump’s comments, in which he denounced hate and white supremacy, with the headline “Trump Urges Unity vs. Racism.” That brought sharp reactions on social media, with some vowing to cancel their subscriptions to the paper and critics alleging it oversimplified a presidential response that did not include specific proposals to curb gun violence.

Hours later, the headline was changed to “Assailing Hate But Not Guns,” though that revision was also criticized.

Watters said Americans don’t care about identity politics but functional, utilitarian issues such as the economy and health care.

“Race won’t have the same type of effect as the Russia thing did,” Watters said. “That type of messaging … [is] gonna turn off the various voters” in the heartland who could be swing voters next year.

Juan Williams chimed in that the paper’s future coverage makes sense with the nation’s current pulse, noting “2/3 think he is tearing the country apart.”

He added: “How could you not pay attention to” identity politics?

“It’s the media creating the narrative. … They are gonna have to keep creating it.” He added that the country is always showing progress for all Americans.

“It’s getting better but they don’t like that story.”

Over two and one-half years into the Presidency of Donald J. Trump, the gaping maw that is America’s Political Division is more cavernous as ever.

While the News Organizations like the failing New York Times who inhabit the never-ending metropolitan areas of the East and Left Coasts and the “Beltway” insist, as “some old Lib” named Phil Donahue did in July of 2017 that,

Despite what Juan Williams said during “The Five” yesterday. those of us who live in America’s Heartland, between the coasts, continue to support the man whom we elected to the most powerful office in the Free World…because he is not a politician.

Liberals who seem to spend their entire day on Social Media posting fake news stories, pulling “facts” out of their hindquarters such as the erroneous claims that President Trump is a racist, and posting anything and everything that they can, in order to attempt to remove President Trump from office, are probably in diabetic shock from consuming too many Cheetos and donuts in their Mom’s basement, as they attempt to comprehend what I am writing.

None of these fake news stories, Democrat-heavy polls, photoshopped pictures, “Antifa”, and stupid Occupy Democrat Memes on Facebook are making any difference to average Americans.

The Democrats and their Propaganda Arm, the Main Stream Media, as a result of their own regional bias toward the major metropolitan areas on the East and Left Coasts, which has been obvious to average Americans for the last several decades, continue through their sheer arrogance and hatred for the traditional American Way of Life, to distance themselves from the people whom they continue to claim that they “love”…Average Working Class Americans.

Yet still, they expect us to believe the Fake News which they are desperately trying to distribute in a vain attempt get Trump out of office, and which Liberal Trolls are posting on Social Media ad nauseam, so that they and the rest of the “useful idiots”, in their shared madness, can regain the White House, even though all of their Primary Candidates do not stand a chance against President Donald J. Trump..

Americans do not care what Main Stream Media “journalists” such as those employed by the failing New York Times think.

The Democrats became the party of the “Upper Crust” and Special Interest Groups, who, as the failing New York times has so clearly and unwittingly illuminated in the last several years, look down their noses at Americans who live here in “Flyover Country”.

Guess what, Democratic Elite, George Soros, Barack Hussein Obama, Facebook and Internet Trolls, Hollywood Celebrities, and the rest of you still throwing a National Temper Tantrum like the failing New York Times and the rest of the Main Stream Media?

Trump won! Therefore, he does have a mandate, which includes building a wall on our Southern Border, regardless what your highly inaccurate Democrat sample-heavy polls show. If you polls were accurate, Hillary Clinton would be our nation’s President (shudder).

And, average Americans, the “Deplorables” between the coasts whom Democrats and the MSM “journalists” like The failing New York Times continue to insult and ridicule on a daily basis, still support and appreciate president Donald J. Trump.