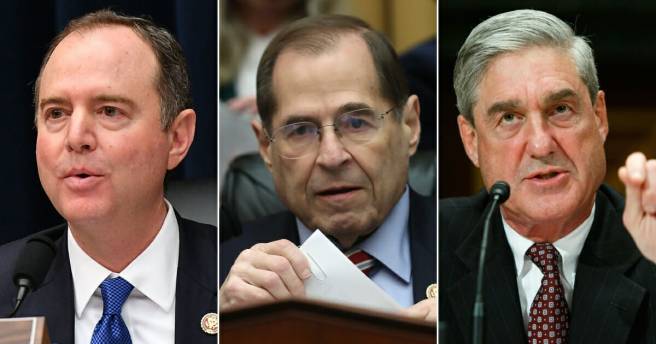 I feel like we are all in a “Neverending Story” sequel with Nancy Pelosi playing the flying white dog-dragon.

Former Special Counsel Robert Mueller has agreed to testify before the House Judiciary and Intelligence Committees on July 17 after they subpoenaed the special counsel Tuesday, according to the committees’ chairmen, Reps. Jerry Nadler, D-N.Y., and Adam Schiff, D-Calif.

Congressional Democrats have fought to get access to Mueller and his unredacted report on Russian interference in the 2016 presidential election and whether President Trump obstructed justice. Weeks of negotiations between House Democrats and the Justice Department ultimately ended with the subpoena.

Fox News has learned Mueller would appear only under a subpoena, which has been described as a “friendly” subpoena, one that in essence had been planned. Mueller is expected to stick to the “four corners” of his report.

“Americans have demanded to hear directly from the Special Counsel so they can understand what he and his team examined, uncovered, and determined about Russia’s attack on our democracy, the Trump campaign’s acceptance and use of that help, and President Trump and his associates’ obstruction of the investigation into that attack,” Nadler and Schiff said in a joint statement.

In this March 24, 2019 photo, then-special counsel Robert Mueller walks past the White House, after attending St. John’s Episcopal Church for morning services, in Washington. Mueller will testify publicly before House panels on July 17 after being subpoenaed. (AP Photo/Cliff Owen, File)

Mueller did not immediately comment. In a news conference last month in which he delivered his first public remarks in more than two years, the special counsel said he did not wish to appear before lawmakers.

“The report is my testimony,” he said.

The news conference emboldened some Democrats’ demands for answers and a push to launch impeachment proceedings against Trump. Many have accused the president of obstructing Mueller’s two-year investigation, which found 100 contacts between Russian operatives and the 2016 Trump campaign. Mueller wrote that he found insufficient evidence to establish a conspiracy between the campaign and Russia.

Mueller reiterated last month that his 448-page report did not entirely clear Trump. “If we had had confidence that the president clearly did not commit a crime, we would have said so,” he said.

Attorney General Bill Barr said previously that he had no problem with Mueller testifying and would not stand in the way.

The above article quotes the House of Representatives’ version of Laurel and hardy, otherwise known as Schiff and Nadler, as proclaiming in a “Royal Decree” that

“Americans have demanded to hear directly from the Special Counsel so they can understand what he and his team examined, uncovered, and determined about Russia’s attack on our democracy, the Trump campaign’s acceptance and use of that help, and President Trump and his associates’ obstruction of the investigation into that attack.”

Those guys need to smell what they are shoveling.

No American that I know living here in the Heartland wants another serving of the nothingburger known as the Mueller Report.

Regardless of what Nadler, Schiff, and the rest of the obsessed Democrat Politicians claim, Americans are ready for the House to actually get to work and do something, ANYTHING, productive, instead of attempting to overthrow the 2016 Presidential Election results.

This Impeachment-without-impeaching of President Trump got old a looong time ago.

Attorney General Barr and Asst. Director of the DOJ Rosenstein thoroughly reviewed the report and determined that there was no collusion and no obstruction of justice.

However, that has not been good enough for the Democrats in the House and Senate.

Make no mistake about this, gentle readers, they have not been asking for Special Counsel Mueller to testify before the House Subcommittees because they care about the cause of justice or the wellbeing of American Citizens.

Just as it was in the case of their support for Special Counsel Mueller and his team of Investigators comprised of 19 Democratic Donors, the Democrats want to obstruct, delay, and derail President Trump from his mission to fulfill the Campaign Promises which he made to Americans.

Also, just as I have been writing concerning the Mueller Investigation for the last two plus years, the REAL story remains the corruption of the Obama Administration. Specifically, all of the malfeasance of Former Secretary of State Hillary Clinton, including E-mailgate, the Clinton Foundation Pay-for-Pay Scandal, Uranium One, and the Benghazi Massacre.

For the Democrats in the House of Representatives to perpetuate a false narrative through the arduous and interminable “Investigative Hearings” which they have scheduled and presided over with vengeful glee, they have had to willingly participate in an exercise in futility which has done nothing but deepen the hole which they have already dug for themselves with average Americans even deeper.

As I repeatedly warned, by concentrating their energies and the taxpayers’ time and money on their vendetta against the 45th President, instead of actually bringing up legislation that would help average Americans, they are not only in the process of possibly losing their phony boloney jobs in Washington, they will no doubt once again (at least) be denied the Presidency, as well.

However, thinking about it, their hate for Trump and us “Deplorables” is all they have.

The President and the American Citizens who voted for him, stand in the way of their goal to bring Marxism in the form of “Democratic Socialism” to “The Shining City Upon a Hill”, subsequently turning America into a Third World Barrio.

Hopefully, the Far Left Democrats and their “New Bolsheviks” will eventually figure out that average Americans still do not want what they are offering.

If we did, we would be suffering under the thumb of President Hillary Clinton.

And, since there was NO RUSSIAN COLLUSION by President Trump or his Campaign Staff, it means that Americans were the ones who stopped Hillary Clinton from becoming President.

Perhaps the Democrats should stop their tantrum long enough to reflect on that for a while.