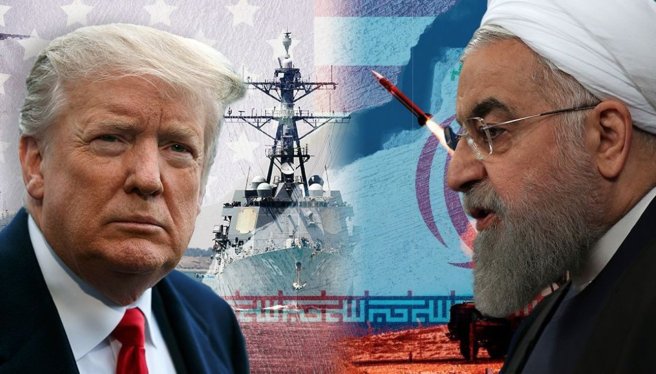 Iran is causing this crisis — not the Trump Administration.

While no one wants a war, it must be clear to Iran that aggression against American interests will be met with overwhelming force and the conflict will end on America’s terms.

President Trump fired a social media broadside at the Iranian regime Sunday afternoon, vowing that war between Washington and Tehran would result in “the official end of Iran” before warning, “[n]ever threaten the United States again!”

Trump tweeted hours after a rocket landed less than a mile from the U.S. Embassy in Baghdad’s heavily fortified Green Zone, the first such attack since September. An Iraqi military spokesman told reporters the rocket appeared to have been fired from east Baghdad, which is home to several Iran-backed Shiite militias.

Tensions between the U.S. and Iran have risen in recent weeks after the Trump administration ordered warships and bombers to the Middle East earlier this month to counter threatened attacks against U.S. interests by Iran or Iranian-backed forces.

The U.S. also ordered nonessential staff out of its diplomatic posts in Iraq days after Secretary of State Mike Pompeo visited Baghdad told Iraqi intelligence that the United States had been picking up intelligence that Iran is threatening American interests in the Middle East. Two Iraqi officials told the Associated Press that Pompeo had offered no details of the alleged threat.

President Trump vowed, in a wide-ranging interview with Fox News, not to let Iran get nuclear weapons but reiterated his reluctance to go to war.

“I will not let Iran have nuclear weapons,” he told Fox News host Steve Hilton in an interview on Sunday. His comments reaffirmed the administration’s resolve in suppressing Iranian nuclear proliferation even as it faced provocations from the regime and threats to U.S. assets in the Middle East.

Trump, during the interview, continued opposing military intervention — something that separated him from others in the 2016 campaign — but indicated Iranian nuclear development would constitute an urgent exception.

“I don’t want to fight. But you do have situations like Iran, you can’t let them have nuclear weapons — you just can’t let that happen,” he said.

While speaking with Hilton, he recounted the costs of war which he said he wanted to avoid.

“With all of everything that’s going on, and I’m not one that believes — you know, I’m not somebody that wants to go into war, because war hurts economies, war kills people most importantly — by far most importantly,” he said.

Trump has urged Iranians to come to the table even as they appeared to continue retaliating over higher sanctions — a devastating form of pressure that started with Trump’s decision to exit the Obama-era nuclear deal.

“I ended the Iran Nuclear Deal, and actually, I must tell you — I had no idea it was going to be as strong as it was.  It totally — the country is devastated from the standpoint of the economy,” he told Hilton.

While the president stood by that decision, he faced renewed criticism from Democrats over that 2018 exit. Many of the 2020 Democratic presidential candidates have pledged to re-enter the deal.

The Mad Mullahs of Iran do not seem to understand that they are not dealing with Petulant President Pantywaist anymore.

Obama, Kerry, and the rest of his Liberal Dhimmi Cabal showed where their loyalties unequivocally lied, with their braggadocio over this Chamberlain-esque “deal” that, from the start, was destined to not only blow up in their faces, but also “where alabaster cities gleam, undimmed by human tears” and in the heart of the Holy Land, itself.

Obama’s concern was never with our allies nor the safety of the citizens and the military of the United States of America.

Obama, as he always had been, was concerned with himself and leaving a marvelous legacy as president.

Giving Iran the means to “kill the infidels” definitely cemented Obama’s Legacy as an incompetent buffoon.

Iran has always been, since the ouster of the Shah, a rogue nation. They are a threat to every nation who stands in the way of their crazed Political Ideology, disguised as a “religion”.

As President Trump said in his Speech to the Arab World, which he delivered in Saudi Arabia, back in 2017…

The Iranian regime’s longest suffering victims are its own people. Iran has a rich history and culture, but the people of Iran have endured hardship and despair under their leader’s reckless pursuit of conflict and terror. Until the Iranian regime is willing to be a partner for peace, all nations of conscience must work together to isolate it, deny it, funding for terrorism, cannot do it, and pray for the day when the Iranian people have the just and righteous government they so richly deserve.

It was far more lucrative for them, when the United States “negotiated from a position of weakness”, when we had a vacillating dhimmi in the White House.

Now, as they found out when he canceled the “agreement” that they made with Obama, Iran has to negotiate with an American President who has mastered “The Art of the Deal”.

…one who will place America and her best interests, first.

The problem Trump faces with Iran is the fact that, as he told the UN, they are a state sponsor of Radical Islamic Terrorism. They are bullies who will lie to your face, as they did to our naïve Former President, when he made his “Gentlemen’s Agreement” with them concerning the development of nuclear weapons.

Through continued threats and “pushing of the envelope”, such as the rocket they just fired into the Green Zone, the leaders of Iran are testing President Trump’s and our nation’s resolve. Plain and simple.

Just like President Reagan sent a guided missile straight into Libyan Madman Moamar Kadhafi’s bedroom, perhaps it is time for President Trump to “fire a shot across the bow” and get the attention of the Radical Islamic Mullahs who govern the Rogue Country of Iran.

After all, bullies with think twice if you stand up to them and give them something to think about.

Ask the bully in 7th grade whom I hit square between the eyes with my 2s (Tom) drumsticks.

He never bothered me again.

And, after President Reagan gave Libya’s Madman Moammar Qadhafi something to think about, we did not hear from him again for 25 years.