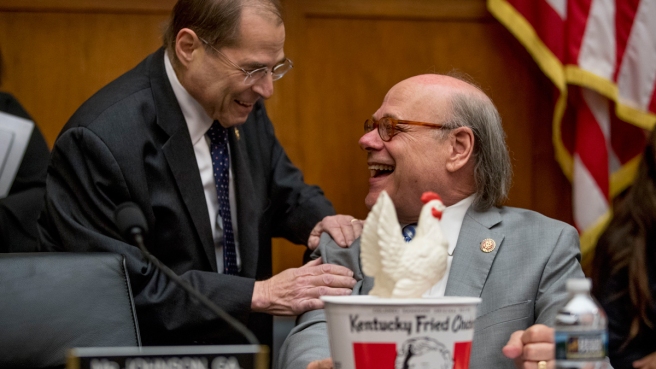 “They’ve testified for many hours, all of them. I would say, it’s done,” Trump told Fox News’ Chief Intelligence Correspondent Catherine Herridge. “Nobody has ever done what I’ve done. I’ve given total transparency. It’s never happened before like this. They shouldn’t be looking anymore. It’s done.”

Trump has called the subpoena issued to McGahn by House Judiciary Committee Chairman Jerrold Nadler, D-N.Y., a “ridiculous” waste of time. The ex-White House lawyer sat for more than two dozen hours of interviews with Mueller and featured prominently in Mueller’s report, and Trump has disputed the account in the report that he ordered McGahn to fire Mueller at one point.

Trump additionally told Herridge he expected that key FBI documents that may shed light on the origins of the bureau’s probe into his campaign could be declassified and released within a matter of weeks, or months at the latest.

Trump previously told Fox News that his attorneys advised him not to declassify and release the full documents — including surveillance warrant applications to monitor former Trump aide Carter Page and related materials — while the Mueller probe was ongoing, for fear the administration would be accused of obstructing justice by doing so.

“Can you imagine someone campaigning — she doesn’t know anything about me, and she’s campaigning on that fact,” Trump said of the Democrat. “They’ve gone through everything — my taxes, my financial statements, which are phenomenal. And I’m so clean. Think of it — after two and a half years, and all of that money spent, nothing. Very few people could have sustained that.”

As I sat in front of my television before going to work yesterday morning, I watched as veteran Democratic Congressional Democrats literally lost their sh…er…minds.

Between House Judiciary Chairman Jerry Nadler literally calling President Trump everything but a Child of God and Rep. Steve Cohen of Tennessee’s majority-black 9th District sitting there with a rubber chicken, eating KFC, the American people were bearing witness to a scene straight from “One Flew Over the Cuckoo’s Nest”.

In their horrible grief over the disappointing outcomes of both the 2016 President Election and the Special Counsel’s Investigation, the Democratic Party, as evidenced by the Judicial Committees in both Houses of Congress, has experienced a psychotic break.

They cannot and will not except the reality in front of them.

Nadler and company can subpoena Attorney General Barr, Former White House Counsel Don McGahn, and even Trump’s children and grandchildren, but it will all be for naught.

They can all tell Congress to “talk to the hand”, just as Obama’s Attorney General Eric Holder told Congress over the “Operation Fast and Furious” gun-running scandal.

According to the writer of the opinion piece, Michael W. McConnell,

…the House should recognize that the executive is an equal branch of government with constitutional privileges of its own. For a president to assert the rights of his office, as almost every president has done, is neither blameworthy nor impeachable.

And, as far as the State of New York’s Democratic Attorney General Letitia James is concerned, Trump is right. She has nothing.

All of this attacking by the Democrats is going to look even worse after the FBI Inspector General’s report comes out in a couple of weeks, followed by Trump’s releasing of the FISA Documents.

Then the entire world will see that all of this “sound and fury, signifying nothing” has been to cover the fact that member of the Obama Administration, UNDER ORDERS, did indeed SPY on Candidate Trump AND President Trump in a Deep State Operation which can only be called an act of sedition.

When that happens Rep. Steve Cohen and his fellow Democrats will no longer be eating Kentucky Fried Chicken.

They will be eating crow.

One thought on “Trump to Fox News About Potential Nadler Subpoenas: “They’ve Testified for Many Hours, All of Them. I Would Say, It’s Done.””