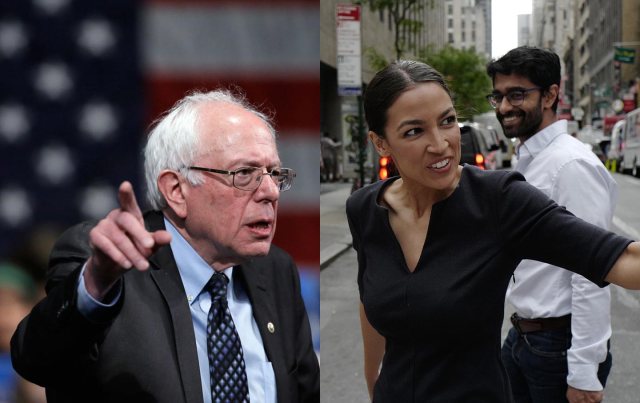 “Socialism only works in two places: Heaven where they don’t need it and hell where they already have it.” – President Ronald Reagan

From the halls of Congress to the presidential campaign trail, Democratic moderates are beginning to push back against the wave of liberal energy and shoot-the-moon policy ideas that have captured the party’s imagination over the last two months.

They worry that the sweeping proposals and hardball tactics of liberal firebrands could alienate centrist voters in the 2020 election, even as they hold out hope that Democratic primary voters, focused on defeating President Donald Trump, will check the party’s move to the left.

The moderates’ concerns came to a head this week when one of the newest Democratic stars appeared to threaten her colleagues if they did not toe the liberal line, raising the specter of a cleave in the party between moderates and purists similar to a long-standing divide in the Republican Party.

At a closed-door meeting of House Democrats on Thursday, Rep. Alexandria Ocasio-Cortez, D-N.Y., said some of her colleagues could find themselves “on a list” of primary election targets, after they voted for a Republican amendment requiring that undocumented immigrants who try to buy guns be reported to U.S. Immigration and Customs Enforcement, according to people in the room who were not authorized to comment publicly.

Rep. Josh Gottheimer, D-N.J., a co-chairman of the bipartisan Problem Solvers Caucus, said he has confronted party leaders about such threats, which have also come from the Justice Democrats, a liberal group that backed Ocasio-Cortez’s primary campaign.

“Being unified means ensuring that Democrats aren’t primary-ing other sitting Democrats,” Gottheimer said. “Since when is it okay to put you on a Nixonian list? We need to have a big tent in our party or we won’t keep the House or win the White House.”

Some warned that imposing purity tests could lead to a Democratic version of the conservative tea party revolt that transformed the GOP in recent years. That surge has brought Republicans new energy and new voters, but it’s also cost the GOP some congressional races and legislative victories.

Several Democratic presidential candidates, including many of the early entrants, have quickly endorsed sweeping liberal policies, including a Medicare-for-all health plan, a “Green New Deal” to combat climate change, and reparations for African Americans. Recently, however, some prospective candidates have been offering an alternative vision.

Sen. Michael F. Bennet (D- Colo.), who is contemplating a presidential run, said U.S. politics needs to return to a more civil place. He referred to the House Freedom Caucus, a group of purist Republicans that often opposes legislative compromises.

Liberal Democrats, including many new to Capitol Hill or national politics, argue that the party has been too timid, caving to Republican pressure and failing to inspire voters with calls for sweeping change. The surge of new voters in the midterm elections, they say, shows the excitement and support generated by such proposals.

The centrists counter that liberal ideas and candidates have more power online and among the grass roots than at the ballot box and that the passions will likely fade in coming months, both in Congress and the presidential campaign.

John Anzalone, an Alabama-based Democratic pollster, said the perception that the party’s primary voters are enthusiastically liberal is not based on data.

“There is, without a doubt, a myth that Alexandria Ocasio-Cortez somehow represents the narrative of Democratic primary voters in the country,” Anzalone said. “Almost half of them identify themselves as moderates or conservative.”

Are these “Moderate Democrats” all bound and gagged and being kept in a bunker somewhere?

From San Fran Nan Pelosi and Chuck “U.” Schumer on down, Marxism is being fully embraced in the name of “Democratic Socialism”. “Political compromise” took the last plane out of town a long time ago.

Did you know that there is an actual organization named the Democratic Socialists of America?

In a document titled “Where We Stand,” DSA outlines in detail its political perspectives. Here is an excerpt…

“Social redistribution—the shift of wealth and resources from the rich to the rest of society—will require: massive redistribution of income from corporations and the wealthy to wage earners and the poor and the public sector, in order to provide the main source of new funds for social programs, income maintenance and infrastructure rehabilitation, and a massive shift of public resources from the military (the main user of existing discretionary funds) to civilian uses.”

Remember when the Former (Thank God) President of the United States of America, Barack Hussein Obama, spoke about “sharing the wealth” to a plumber named Joe during his 2008 Presidential Campaign?

One hundred years ago in Russia, a revolution was based on that very idea.

The unworkable theory that “Democratic Socialism” is based on is known as Marxism.

No government which has taken it as their political philosophy has ever flourished. The government grew and those working within it became rich while the “Proletariat” or average working citizens starved, giving all they had “for the good of the State”.

For quite a while now, I have been referring to those of the Far Left Democratic Party who have been doing every thing they can to disrupt and interfere with the success of President Donald J. Trump and the comeback of the Greatest Country on the face of the Earth, as the “New Bolsheviks”.

To be immodest, it looks like I nailed that one.

These new “useful idiots” are so “out there” that they have the Old Guard of the Democratic Party running scared, allowing them to run the party and their political campaign strategies for not only the next two years but the 2020 Presidential Elections as well.

As America has witnessed, the Democratic Party has been moving further and further to the left side of the Political Spectrum for decades now.

So, it is really no surprise that they have  become which they have been whining about for several years: fascists.

But they have not become just any kind of fascists. They have become Marxist Fascists, extolling the “benevolent goodness” of an all-powerful Central Government who will take care of everyone from cradle to grave.

And, those who refuse to give up their individual freedom as guaranteed to us by our Constitution are to be shunned and ridiculed as “intolerant, ignorant hillbillies”.

As I have written before, America is involved in an internal struggle, a “Civil War”, if you will, for the very soul of our Sovereign Nation.

However, like the Marxists who have declared “war” on America and her citizens before, this new generation of “useful idiots” will find it very hard to win the hearts of average Americans.

For you see, we know Who gave us this country. America was built on a Solid Rock.

24 “Everyone then who hears these words of mine and does them will be like a wise man who built his house on the rock. 25 And the rain fell, and the floods came, and the winds blew and beat on that house, but it did not fall, because it had been founded on the rock. – Matthew 7:24-25

And, as I wrote yesterday, the “Democratic Socialists” don’t even know which restroom to use.