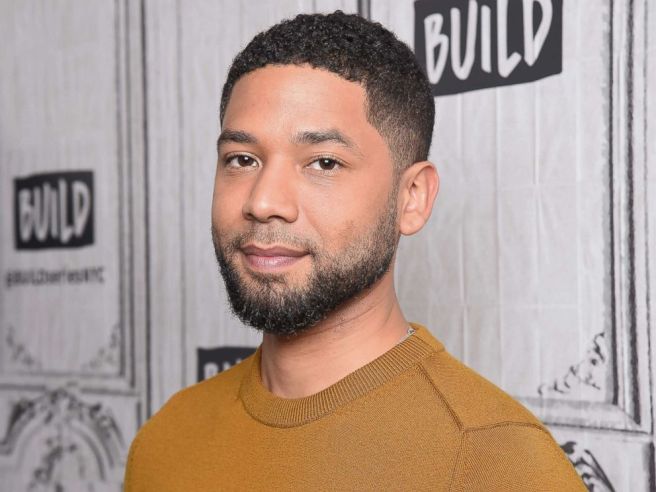 Photos of “people of interest” connected to the alleged attack on “Empire” actor Jussie Smollett were released by the Chicago Police Department Wednesday night.

Smollett, 36, told investigators he was brutally attacked early Tuesday by two unknown men who yelled out “racial and homophobic slurs.”

The police department said earlier Wednesday that they reviewed hundreds of hours of footage from downtown surveillance cameras, but had yet to find footage of the alleged attack.

“While video does not capture an encounter, detectives are taking this development seriously & wish to question individuals as more cameras are being reviewed,” Guglielmi wrote.

The pictures appear to show two people, dressed in dark clothing, walking along a sidewalk next to a building.

Investigators told Fox News that while walking near the Chicago River around 2 a.m. on Tuesday, Smollett said two men approached him and yelled, “This is MAGA country.” The actor told police the men struck him in the face with their hands and poured an unknown chemical on him before wrapping a rope around his neck.

Smollett, according to authorities, took himself to Northwestern Memorial Hospital for treatment.

“Given the severity of the allegations, we are taking this investigation very seriously and treating it as a possible hate crime,” the Chicago police said in a statement after the alleged attack. “Detectives are currently working to gather video, identify potential witnesses and establish an investigative timeline.”

Smollett plays openly gay musician Jamal Lyon on the Fox series. The actor told Ellen DeGeneres in 2015 that he identifies as gay but does not discuss his personal life in public.

In a statement to Fox News, 20th Century Fox Television and Fox Entertainment said: “We are deeply saddened and outraged to learn that a member of our EMPIRE family, Jussie Smollett, was viciously attacked last night. We send our love to Jussie, who is resilient and strong, and we will work with law enforcement to bring these perpetrators to justice. The entire studio, network and production stands united in the face of any despicable act of violence and hate — and especially against one of our own.”

“Empire” is shot in Chicago and is currently in production. A spokesperson for Fox Broadcasting Company confirmed to Fox News Wednesday night that “security has been increased on the production and Mr. Smollett.”

I wish no harm to Mr. Smollett and if he was actually attacked by a couple of white rednecks wearing MAGA hats at 2 in the morning in Downtown Chicago, where they would have stuck out like fireflies in a pasture at midnight, then the perpetrators deserve any punishment that they will receive when caught and adjudicated.

On November 28, 1987, a 15-year-old black girl named Tawana Brawley was found lying inside a trash bag outside an apartment building located in Wappangers Falls, New York. She was covered in feces and racial insults had been scrawled on her body. When questioned by police she claimed that a group of white men, including police officers, had raped and beaten her. The black community rallied around her, and a prominent black leader, the Reverend Al Sharpton, appointed himself her spokesman. Support for Brawley reached its peak on June 15, 1988 when her advisers held a meeting at the Bethany Baptist Church in Brooklyn that was broadcast to an audience of ten million viewers.

However, the material evidence did not back up Brawley’s claims. Her body displayed no signs of rape or assault. She was not frostbitten, even though she had supposedly been kept naked in the freezing woods for days. The feces on her body turned out to be from a neighbor’s dog, and even more damningly, a local resident of the apartment community where she was found claimed to have seen her climb into the trashbag alone and lie down of her own accord.

In October 1988 a grand jury issued a report following a seven-month investigation. It concluded that Brawley’s claims were a hoax. Many speculated that Brawley had made up a wild story in order to avoid punishment at the hand of her stepfather for having run away from home for three days. But Brawley herself insisted that she was telling the truth, a stance which she has maintained to this day. More than anything else, the episode and its bitter aftermath displayed the deep racial divisions that still haunted American society.

The question is…is Mr. Smollett so filled with rage over the fact that Donald J. Trump in the President of the United States of America that he would make up being assaulted in order to further the Democratic Party and Main Stream Media narrative concerning President Trump and us “Deplorables”?

Ladies and gentlemen of the jury, please allow me to present as Exhibit A…a tweet directed to the 45th President of the United States of America, Donald J. Trump.

***I apologize for the language contained in Mr. Smollett’s Tweet.

Shut the hell up you bitch ass nigga. You will continue to run this country further into the ground and risk lives every time you breathe. You’re not the president. Just a dumpster full of hate. FOH. Sick to my stomach that literal shit currently represents America to the world. https://t.co/qoNWllmZIm

I am not accusing Mr. Smollett of anything, as the jury is still out.

However, given Chicago’s reputation as being steeped in gang activity with numerous homicides occurring on an almost daily basis with 18 people murdered so far this year, no one with any sense would have been out that time of night.

Nothing has been proven so far as to whether Mr. Smollett was actually assaulted or not.

If you were not, sir, you are sorry.

2 thoughts on ““Persons of Interest” Sought in Smollett Assault…But, Did It Actually Happen?”