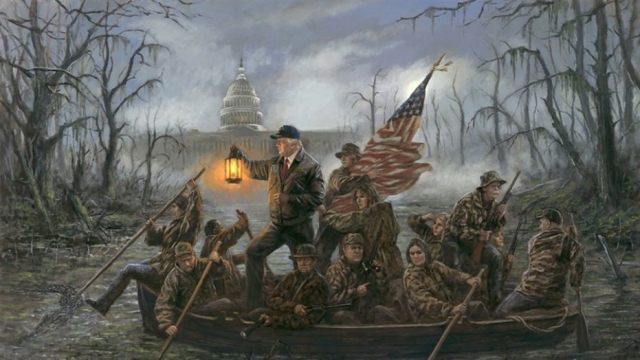 Isn’t it “funny” how those who claim to be the most tolerant among us are actually the least tolerant of all?

Washington Post national political correspondent Dave Weigel referred to President Trump’s supporters in no uncertain terms as “rubes” during an appearance on a left-wing podcast Monday.

Weigel made the comments during an appearance on the “Chapo Trap House” podcast, during which he discussed the recently concluded partial government shutdown. The remarks were first reported by The Daily Caller.

“[Senate Majority Leader Mitch] McConnell [R-Ky.] didn’t care about the wall… he’s very good at identifying what the rubes want to hear,” Weigel said, “because all he cares about is getting enough judges to strike down campaign-finance law, strike down gun law, strike down health care, etc.”

A Washington Post spokesperson told The Daily Caller that the situation “is being handled internally.”

“We do not think our reporters should be using derogatory terms to characterize anyone,” the spokesperson said.

The newspaper did not return Fox News’ request for comment.

Weigel is in his second stint at the Post. He resigned in 2010 after emails he had written to other reporters on a listserv called Journolist were leaked to The Daily Caller and other outlets. The emails included disparaging comments about conservative personalities including Rush Limbaugh, Glenn Beck and Newt Gingrich.

Weigel was rehired by the paper in 2015.

Over two years into the Presidency of Donald J. Trump, the gaping maw that is America’s Political Division is more cavernous as ever.

While the News Organizations and Political Pundits who inhabit the never-ending metropolitan areas of the East and Left Coasts and the “Beltway” insist, as “some old Lib” named Phil Donahue did July before last, that,

Those of us who live in America’s Heartland, between the coasts, continue to support the man whom we elected to the most powerful office in the Free World…because he is not a politician.

None of these fake news stories, Democrat-heavy polls, photoshopped pictures, and stupid Occupy Democrat Memes on Facebook are making any difference to average Americans.

The Democrat and their Propaganda Arm, the Main Stream Media, as a result of their own regional bias toward the major metropolitan areas on the East and Left Coasts, which has been obvious to average Americans for the last several decades, continue through their sheer arrogance and hatred for the traditional American Way of Life, to distance themselves from the people whom they continue to claim that they “love”…Average Working Class Americans.

Yet still, they expect us to believe the Fake News which they are desperately trying to distribute in a vain attempt get Trump out of office, and which Liberal Trolls are posting on Social Media ad nauseam, so that they and the rest of the “useful idiots”, in their shared madness, can get a do-over and Hillary Clinton will somehow miraculously become the President.

Americans do not care what Main Stream Media “journalists” such as Dave Wiegel think.

The Democrats became the party of the “Upper Crust” and Special Interest Groups, who, as Dave Wiegel so clearly demonstrated, look down their noses at Americans who live here in “Flyover Country”.

Trump won! Therefore, he does have a mandate, which includes building a wall on our Southern Border, regardless what your highly inaccurate Democrat sample-heavy polls show.

And, average Americans, the “Deplorables” between the coasts whom Democrats and the MSM “journalists” like Dave Wiegel continue to insult and ridicule on a daily basis, still support and appreciate president Donald J. Trump.