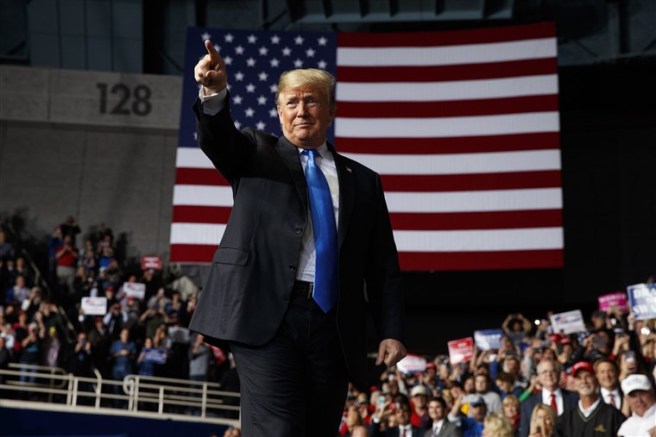 Multiple reports indicating Sayoc has lengthy criminal history, back to 1991, including larceny & fraud. Arrest in 2002 for bomb threat. A career criminal. Will that stop legacy media from blaming Trump & ignoring his calls for unity? 🤷🏻‍♀️

President Trump on Friday night condemned the media’s coverage of his administration as divisive to America. The comments, at a campaign rally in Charlotte, North Carolina, came as the nation has been consumed by the topic of the deepening political divide, and just hours after a suspect was arrested in Florida over mail bombs sent to prominent Democrats and Trump critics.

That suspect, 56-year-old-Cesar Sayoc, appeared to be a passionate advocate for Trump on his social media accounts, frequently posting conspiracy theories and criticisms against Democrats and liberal celebrities.

“As you know, the suspect has been captured – great job – and is now in federal custody,” Trump said. “This is finding, truly, a needle in a haystack, when you think about it. Political violence must never, ever be allowed in America and I will do everything in my power to stop it.

“Everyone will benefit if we can end the politics of personal destruction,” he continued. But he also stressed that “the media has a major role to play whether they want to or not.”

Republicans, Trump said, did not play political games after a Bernie Sanders supporter shot at GOP congressmen in 2017, including Rep. Steve Scalise, R-La., who was badly injured in the attack.

“Yet the media has tried to attack the incredible Americans who support our movement to give power back to the people,” Trump continued. “Ninety-four percent of the press I get is negative, even when I do something wonderful.”

“We want honest coverage from the media,” he said. “That’s all we want.”

The president was in the state to make a campaign push for Rep. Ted Budd and GOP candidate Mark Harris. Budd is a first-term congressman facing Democrat Kathy Manning. Harris, meanwhile, upset Rep. Robert Pittenger in a May GOP primary and faces Democrat Dan McCready.

“Get ’em to Washington please, and fast,” Trump said after Budd and Harris spoke at the rally. “I’m here tonight because we can’t take any chances. Get out and vote.”

“This is one of the most important elections of our lifetime,” Trump said. “A vote for Democrats is a vote for open borders and a vote for tax hikes.”

“This will be an election of common sense,” he argued. “We need borders. We need a great military. We want lower taxes. It’s not conservative or liberal. It’s common sense.”

The mail bomb saga, with its focus on packages sent to outspoken Trump critics, has been one of the major news events highlighting what many see as a growing polarization in America. At the same time, there have been repeated instances in which Trump-aligned GOP lawmakers and members of the administration have faced heckling and scorn while venturing out in public for things like dinner at a restaurant. And some Democratic leaders have drawn fire for appearing to encourage such hostile engagement.

I understand exactly what President Trump was saying last night and I don’t blame him one bit.

Now, I don’t know whether that whack job that they arrested for the non-explosive bombs sent to the offices of Democratic Politicians and their bought-and-paid- for Distributor of Propaganda, CNN, was a Democrat like his MyLife.com page said or a Republican, as he supposedly was registered as.

As Rhett Butler said to Scarlett in “Gone With the Wind”,

Also at this point, it doesn’t matter if he did this on his own or was somebody’s patsy.

No one lost their life and the jerk was arrested.

Whatever the cause of his actions, they have given the Party of Special Interest Groups something to express imperious righteous indignation about, conveniently forgetting about their own whack jobs, such as the Bernie Sanders Supporter who shot Congressman Steve Scalice and 4 others.

Watch and listen this weekend as the Dems and their Propaganda Distributors, CNN, MSNBC, and the Broadcast News Operations, blame Trump and all of us average Americans between the coasts who supported him for the actions of a psychopath.

And, as you do, I recommended Alka-Seltzer Chewables. They act fast and they taste good.

I agree with the president: we must come together as a nation.

However, the Democratic Party Hierarchy and the Special Interest Groups who control them do not want this Sovereign Nation to be united. They want us to remain divided. A divided nation gives Democratic Politicians and their minority political ideology more of a chance to win over “useful idiots” willing to put them back in power in our nation’s capitol.

So, unless, God forbid, we have another national travesty, like a 9/11, happen anytime soon, we will remain a divided nation.

And, heck, even if something that horrible were to happen again…

The Democrats would blame Trump.