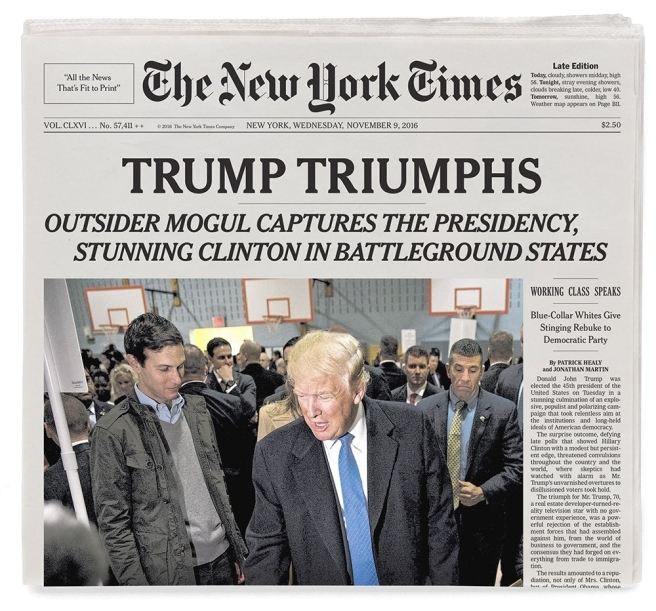 Yesterday, Trump posted the following tweet about that meeting…

In response to the President’s tweet, the Publisher of The New York Times posted these remarks about their meeting…

My main purpose for accepting the meeting was to raise concerns about the president’s deeply troubling anti-press rhetoric.

I told the president directly that I thought that his language was not just divisive but increasingly dangerous.

I told him that although the phrase “fake news” is untrue and harmful, I am far more concerned about his labeling journalists “the enemy of the people.” I warned that this inflammatory language is contributing to a rise in threats against journalists and will lead to violence.

I repeatedly stressed that this is particularly true abroad, where the president’s rhetoric is being used by some regimes to justify sweeping crackdowns on journalists. I warned that it was putting lives at risk, that it was undermining the democratic ideals of our nation, and that it was eroding one of our country’s greatest exports: a commitment to free speech and a free press.

Throughout the conversation I emphasized that if President Trump, like previous presidents, was upset with coverage of his administration he was of course free to tell the world. I made clear repeatedly that I was not asking for him to soften his attacks on The Times if he felt our coverage was unfair. Instead, I implored him to reconsider his broader attacks on journalism, which I believe are dangerous and harmful to our country.

Which, in turn, led to the following tweets from the President…

Here is my question for Mr. Sulzberger…

In what way are President Trump’s tweets about modern “journalism” “harmful to our country”?

Since we are not face to face, I will answer that question for you.

The answer is: The President’s tweets are NOT harmful to our country.

Like President Ronald Reagan before him, he is bypassing your newspaper and the rest of the servile Propaganda Arm of the Democratic Party known as the Main Stream Media, in order to communicate directly to the American People.

By tweeting, the President does not have to worry about the ideological filters or blatant Liberal Spin which, in this “enlightened age”, has taken the place of good old-fashioned objective journalism.

The reason why your newspaper, the once world-renowned “Gray Lady”, has fallen from the atmospheric heights of being considered the pinnacle of journalistic endeavor to being nothing by an over-priced birdcage liner, is because of your obvious bias in favor of a political ideology which, despite your best efforts, remains the political viewpoint of a minority of Americans.

The fact that your publication has been cited numerous times over the last several years for being ethically challenged and having a propensity for posting fake news stories hasn’t helped your circulation, either.

Main Stream Media members, such as your newspaper and The Washington Post, which the President also cited, became spoiled during the two terms of President George W. Bush, because he decided not to fight back against your fake news stories and scurrilous attacks.

And then, you enjoyed the favor of King Barack The First, whom your gleefully served for 8 long years, applauding and supporting his every move, while telling us how gracious and refined his anti-American mooching wife was and how beautiful her arms were.

Which brings us to the present and an American President whom you all revile because he accomplished what you had all predicted was an impossible feat, beating Hillary Rodham Clinton for the Presidency of the United States of America.

And then, he had the nerve not only to go straight to the American public through the use of Twitter, he fought back against your attacks and called your lies and innuendoes based upon information gathered from “unnamed sources” (probably the voices in reporters’ heads) what they were: FAKE NEWS.

Mr. Sulzberger, I feel your “concern”. In fact I am sharing a tear over your dilemma…from laughing hysterically.

So, before your once-great newspaper goes the way of the Dodo and all that is left is you and your laptop, just remember what the late, great Will Rogers used to say,

All I know is just what I read in the papers, and that’s an alibi for my ignorance.