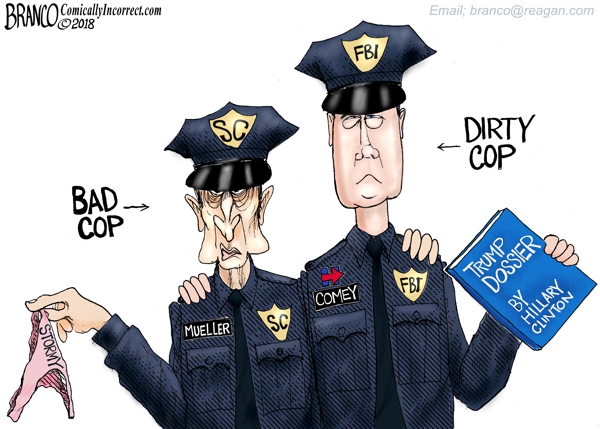 …The clamor over the watchdog’s findings was the latest turn in the GOP’s increasingly hostile and preemptive offensive against Mueller’s expected report on the president’s conduct. And the furor is almost tailor-made for Trump, who throughout his career has clutched onto small details and controversy as weapons he uses to define his enemies and erode trust in institutions.

Particularly notable, from the perspective of Trump’s allies, was the searing criticism in the report reserved for the conduct of one of Trump’s most high-profile critics, former FBI director James Comey, as well as the revelation that lead FBI agent Peter Strzok had shown anti-Trump bias. “We’ll stop it,” Strzok wrote in a text message, referring to Trump’s presidential campaign.

White House press secretary Sarah Huckabee Sanders said the report “reaffirmed the president’s suspicions about Comey’s conduct and about the political bias of some members of the FBI.”

On Capitol Hill, there was an outcry. Sen. Lindsey Graham, R-S.C., a Trump ally, said on Thursday he would support a new federal probe of Mueller’s special counsel investigation. “You’re going to need independent eyes,” he told reporters.

Democrats, as they have for months, sought to defend the sanctity of the special counsel’s inquiry. They said Mueller’s mission should not be attacked because FBI agents behaved inappropriately.

“None of this reflects on the special counsel’s work,” said Rep. Adam Schiff, Calif., ranking Democrat of the House Intelligence Committee.

Republicans, however, sought to use the report to tarnish investigators.

Since the Strzok text message had not been previously disclosed to Congress, a number of Republicans immediately asked whether the Justice Department had purposefully hidden that missive from them.

Republican Reps. Andy Biggs, Ariz., Matt Gaetz, Fla., Ron DeSantis, Fla., – all Trump supporters – sent the Justice Department a letter Thursday demanding that the inspector general turn over all previous reports to see if “people may have changed the report in a way that obfuscates your findings.”

So, what is the “mission of the Special Counsel and his “13 angry Democrats”, Rep. Schiff?

Wasn’t the Russia Probe formed to find evidence of Russian interference on behalf of the Trump Campaign in the 2016 Presidential Election?

Well, the House Investigative Committee has already ruled that there was no collusion.

And, Special Counsel Mueller has stated that President Trump is not a target in the investigation.

So, what is the purpose of the Special Council and his Lynch Mob’s continued existence?

Is it to find something…ANYTHING…with which to impeach the 45th President of the United States of America…simply because Americans in “Flyover Country” elected him as President instead of “The Chosen One II”, Hillary Clinton?

Or, is the purpose of the Investigation simply to provide enough interference so that Trump cannot fulfill his Campaign Promises and will be seen as a failed President, ensuring a Democratic Victory in 2020?

Well, considering the enormous success of his first 500 days in office, I think you’ve got about as much chance succeeding at ever of those as Rosie O’Donnell has of being on the front cover of the Sports Illustrated Swimsuit Edition (try unseeing that).

So, Rep. Shiff, considering that only a minority of Americans supported Mueller’s Investigation before the IG’s Report and one of his investigators is one of those FBI Agents singled out for possible legal consequences, and with the IG Report on the Russia Probe on the horizon, don’t you think that it is time for Special Counsel Mueller to “put up or shut up”?

Lord knows, us “rubes” out here in “Flyover Country” certainly do.