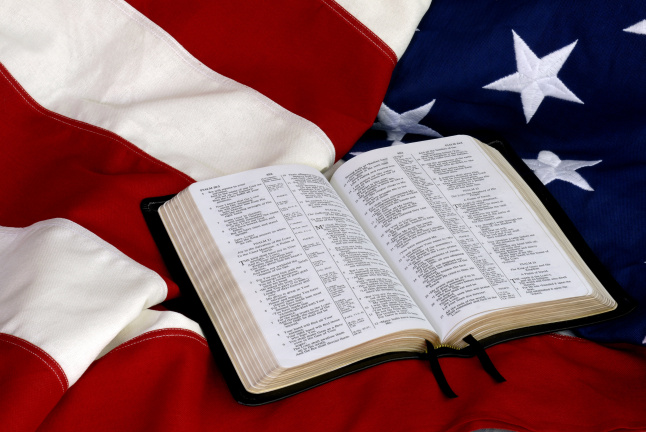 You do well to wish to learn our arts and ways of life, and above all, the religion of Jesus Christ. These will make you a greater and happier people than you are. – President George Washington

Shane Claiborne and a cadre of progressive Christians are spearheading a “revival” this weekend at an event to draw a contrast to the “America First” Christianity they say Liberty University President Jerry Falwell Jr. and pro-Trump Christians promote.

What is being called “Red Letter Revival: A Revival of Jesus & Justice” is being held at the EC Glass Civic Auditorium in Lynchburg, Virginia, and features speakers and musicians that include well-known progressive faith leaders like the Rev. William J. Barber, Tony Campolo, and Lisa Sharon Harper, among several others.

The Red-Letter Revival in Lynchburg has been months in the making and was planned in part to be a witness against what they see as the corruption of Christian faith by conservative evangelical Christians, particularly their willingness to embrace President Donald Trump and his policies.

“We are not coming to condemn Falwell Jr., but to counter the doctrine of ‘America First,’ with the Christian message — that we cannot put allegiance to a nation-state ahead of our allegiance to the Kingdom of God as taught by Christ, in which the last are first,” wrote Jonathan Martin, one of the organizers, in a Feb. 21 editorial.

“We are not looking to demonize anyone, but rather to proclaim the One at whose name demons tremble. We are believing God for the Lynchburg Revival to be a powerful counter-witness to white Christian nationalism — marked by fasting, repentance, prayer, preaching, worship, and foot-washing.”

He went on to explain that Lynchburg has “symbolic power,” given that it’s the city from which Falwell Jr., has promoted “President Trump’s brand of Christian nationalism,” yet “we believe it can be known as ground zero for a mighty move of God.”

“How does Claiborne expect Falwell to respond in light of some of Claiborne’s recent tweets?” Fea asked, citing a Wednesday Twitter post from Claiborne that included an April 3 Associated Press news story headline that read “Virginia Revival to Protest ‘Toxic’ Christianity.”

“The fact that Claiborne shared these letters via Twitter makes it look like there is more going on here than just a request for prayer. Did Claiborne really believe Falwell Jr. would take him up on this offer?”

I did a little research and found out that

Shane Claiborne is a Red Letter Christian and a founding partner of The Simple Way community, a radical faith community that lives among and serves the homeless in the Kensington neighborhood of Philadelphia. He is the co-author, with Chris Haw, of “Jesus for President”. His newest book is “Executing Grace: Why It is Time to Put the Death Penalty to Death”.

He is a Social Justice Warrior and a featured writer on sojo.net, the official website of the Sojourners.

And, who are “The Sojourners”? I’m glad you asked.

Founded by Jim Wallis, Sojourners is a Washington, DC-based Christian evangelical ministry professing a devotion to the pursuit of “social justice.” Believing that capitalism serves to “normalize poverty and segregate the world by class,” this organization views “gospel faith” as something that “transforms our economics … and provides a vision for social revolution.” According to Wallis, the world’s chief capitalist giant — America — is “the great power, the great seducer, the great captor and destroyer of human life, the great master of humanity and history in its totalitarian claims and designs.”

In the 1980s the Sojourners community actively embraced liberation theology, which teaches that the New Testament gospels can be properly understood only as calls for social activism, class struggle, and revolution aimed at overturning the existing capitalist order and installing, in its stead, a socialist utopia where today’s poor will unseat their “oppressors” and become liberated from their material (and, consequently, their spiritual) deprivations. Animated by this perspective, Sojourners rallied to the cause of communist regimes that had seized power, especially in Latin America, with the promise of bringing about the revolutionary restructuring of society. Particularly attractive for the ministry’s religious activists was the communist Sandinista regime that took control of Nicaragua in 1979.

I do not believe that Jesus would be a part of the Social Justice Movement, advocated by the Modern American Liberals of the Democratic Party. His was and is a soul-saving movement. One that still brings hundreds of thousand of people to individual salvation on this terrestrial ball every day. A movement that, in fact, was embraced by the founders of this cherished land.

The Social Justice Movement is an offshoot of Marxist Theory, named for the radical who conceived it, Karl Marx. It’s basic tenet states,

The modern translation, provided for us by Former President Barack Hussein Obama, during his 2008 Presidential Campaign, is that working Americans need to “share the wealth”.

That, boys and girls, is “Socialism” and, in Marxist Theory, Socialism is the step before Communism.

A simple definition of Socialism describes it as

a political and economic theory of social organization that advocates that the means of production, distribution, and exchange should be owned or regulated by the community as a whole.

After President Barack Hussein Obama took office, he made a point of stating several times that America was not just a Christian nation anymore.

And, while that remains true to a certain extent, it is also true that the overwhelming majority, 75% of Americans, still proclaim themselves to be followers of Jesus Christ. And even beyond that, 92% of Americans still believe in God.

What is amazing to me, though, is how,  American Christianity is still being constantly attacked on all fronts:  militarily, culturally, and even within organized religion, itself, as demonstrated by Shane Claiborne and the rest of the Progressive “Christians” at the Lynchburg Revival.

From illegal immigration to abortion to homosexual “rights”, Americans who follow the teachings of Jesus Christ on these issues have been under fire by Progressive “Christians like Shane Claibornes, who insist that they know more about what is in the Bible and what Christ says, or would say, about these topics, then those of us who actually read God’s Word.

When you enter into a Facebook “discussion” with these “new Pharisees”, and you counter their arguments on these topics with Scripture, Liberals are initially slow to respond.

All Scripture is breathed out by God and profitable for teaching, for reproof, for correction, and for training in righteousness, – 2 Timothy 3:16 ESV

Most Liberals will start “Googling” these topics, looking for any Scriptures that will substantiate their position.

There’s been many a time they have come back at me with Old Testament Scripture. It is then that I explain to them about the sacrifice that Christ made for us sinners, freeing Christians from Jewish Law and taking the punishment for our sins , creating a New Covenant by covering Christians through the shedding of His blood.

At that point in the “discussion”, there is a long pause, as they are trying to figure out a comeback.

The natural person does not accept the things of the Spirit of God, for they are folly to him, and he is not able to understand them because they are spiritually discerned.- 1 Corinthians 2:14

This misconception, which I have been trying to explain, involves Liberals’ belief that American Christians will not fight back against them and the things they want to say and do in our society.

If there’s one thing during all of the years of anti-Christian bias, which we experienced during the Obama administration, and now, 17 months after Christian Americans helped elect American Businessman and Entrepreneur Donald J. Trump as the 45th President, that the Liberals should have learned, is the fact that Christian American Conservatives will fight back.

It is funny though…that when we begin fighting back, the Liberals have a tendency to label us as uncaring, mean, divisive, and intolerant

Which is extremely ironic because as shown through their words and actions, those who consider themselves to be the “Smartest Christians in the Room”, these Modern-Day Liberal Pharisees, who wish to embarrass supporters of President Trump, like Jerry Falwell, Jr., are actually the meanest, most divisive, and least tolerant of us all.

“Let he who is without sin…”