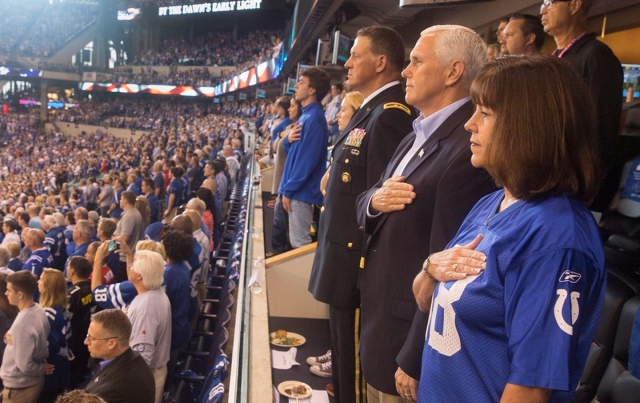 Well, another Sunday Afternoon in America, and another opportunity for NFL Players to show Americans their backsides.

Only this time, an American Leader kicked them in it.

Vice President Mike Pence walked out on his home-state Indianapolis Colts Sunday when members of the opposing team kneeled for the national anthem, but a report that Colin Kaepernick, the player who started it all, will stand if given another shot in the NFL was quickly dialed back.

“I left today’s Colts game because @POTUS and I will not dignify any event that disrespects our soldiers, our Flag, or our National Anthem,” Pence tweeted.

Several San Francisco 49ers players kneeled for the anthem on Sunday in Indianapolis.

Pence later posted a statement which read, “I left today’s Colts game because President Trump and I will not dignify any event that disrespects our soldiers, our Flag, or our National Anthem. At a time when so many Americans are inspiring our nation with their courage, resolve, and resilience, now, more than ever, we should rally around our Flag and everything that unites us.”

“While everyone is entitled to their own opinions, I don’t think it’s too much to ask NFL players to respect the Flag and our National Anthem,” he continued. “I stand with President Trump, I stand with our soldiers, and I will always stand for our Flag and National Anthem.”

President Donald Trump later tweeted, “I asked @VP Pence to leave stadium if any players kneeled, disrespecting our country. I am proud of him and @SecondLady Karen.”

Trump’s son Eric also took to Twitter Sunday, writing, “Vice President Pence is truly an amazing man! Thank you for standing up for our country and for the respect of our great flag! @VP”

While a quarterback for the 49ers last year, Colin Kaepernick sat or kneeled during the national anthem last season to bring more attention to the killings of black men by police officers. The protests have grown this season.

Meanwhile, CBS Sports’ Jason La Canfora corrected his report that had claimed Kaepernick would stand during the national anthem if given a chance to play football in the NFL again.

“Wanted to clarify one thing regarding @Kaepernick7. When I was asked about his whether or not he would sit or stand for anthem …” La Canfora tweeted after the report came out earlier Sunday.

“Standing for Anthem wasn’t something that I spoke to Colin about,” the reporter added. “I relayed what had been reported about him standing in the future…”

“Reports about @Kaepernick7 standing for anthem had not been refuted,” La Canfora wrote. “However, I can’t say if they are true or not. Colin and I didn’t discuss.”

In another message, La Canfora said, “Colin would have to address any future demonstrations. I didn’t ask him if he would sit or stand. Our chat primarily about his will to play.”

“I know @Kaepernick7 is fully committed to playing football and helping those in need. What he would do during the Anthem I do not know,” he wrote.

The reporter added that Kaepernick has been living in New York and working out privately in New Jersey with the hope of signing with a team this season.

“After sitting down with Colin Kaepernick for several hours, @JasonLaCanfora says the QB is still actively trying to play in the NFL,” NFLonCBS tweeted Sunday, including a video.

After sitting down with Colin Kaepernick for several hours, @JasonLaCanfora says the QB is still actively trying to play in the NFL. pic.twitter.com/R9qTIZ7EQl

“He’s not planning on kneeling, he’s going to donate all his jersey sales, and he’s planning on standing for the anthem, if given the opportunity,” La Canfora initially said in the video segment.

“The reports that Colin will stand for the anthem are completely false! He has never discussed this with anyone,” she posted.

Of course he did.

Cowboys owner Jerry Jones said after Sunday’s game against the Green Bay Packers that any Cowboy who “disrespects the flag” will not play.Said Jones:  “If there is anything disrespecting the flag, then we will not play. Period. We’re going to respect the flag and I’m going to create the perception of it. …

“I know this. We cannot in the NFL, in any way, give the implication that we tolerate disrespecting the flag. We cannot do that. I know the vice president did leave because in his opinion, the teams were. We know that there is a serious debate in this country about those issues. But there is no question in my mind that the National Football League and the Dallas Cowboys are going to stand up for the flag. Just so we’re clear.”

In response, the NFL Players Association issued the following statement…

NFL players are union members and part of the labor movement that has woven the fabric of America for generations. Our men and their families are also conscientious Americans who continue to be forces for good through our communities and some have decided to use their platform to peacefully raise awareness to issues that deserve attention.

It is a source of enormous pride that some of the best conversations about these issues have taken place in our locker rooms in a respectful, civil and thoughtful way that should serve as a model for how all of us can communicate with each other.

We should not stifle these discussions and cannot allow our rights to become subservient to the very opinions our Constitution protects. That is what makes us the land of the free and home of the brave.

Gentlemen, this is America.

You have the right to your opinion…an opinion that was limited to just a couple of you before November 8, 2016.

An opinion which has your base down 31% and which has caused you to drop to the position of the least favorite professional sport in America, trailing Major League Baseball and Professional Basketball.

Your opinion has also cost your league and the owners of your respective teams BIG money. Money which they had to give back to sponsors because of the NFL’s failure to meet promised revenue projections in order to secure lucrative advertisers’ partnerships.

That’s not even counting the empty stadium seats, which are so clearly visible that neither the league nor those televising the games can purposefully hide them anymore.

And, let’s not forget the stadium vendors and the peddlers of official NFL merchandise, such as jerseys and hats, which have been on display on Facebook as once loyal fans burn them in retribution for your on-field displays of your “Constitutional Right” to disrespect our flag and the playing of our National Anthem.

Now, Dallas Cowboys Owner Jerry Jones wants to “stop the bleeding” as he recognizes that moniker of “America’s Team” given to his NFL Franchise so many years ago, is no longer so, as Americans are finding something better to do on their Sunday Afternoons.

In my research for this post last night, after coming home from MY job, a real one, mind you, not a game we used to play with a Nerf Football in each other’s front yards,  I read where some of you were complaining that Vice-President Pence’s walking out after the 49s disrespected the flag and the national anthem was “staged”. Actually, he was there to watch a football game. Not a Political Demonstration.

You spoiled ungrateful brats protested our nation, so our nation’s Second-in-Command protested you right back.

Flipping off your fans, your Team Owners, and the majority of Americans, including those occupying the Halls of Power in Washington, DC, does not seem to be working out so well for you and your display of your “Constitutional Rights” while you are supposed to be a professional ON THE JOB, does it?

But, hey, no worries.

If you lose your jobs because of the decrease in revenue that your Political Demonstrations are causing, I’m sure that you “professionals” can find work.

After all, it is the time of year when companies are hiring “Seasonal Help”.

How do your guys look in a red suit and a white beard?