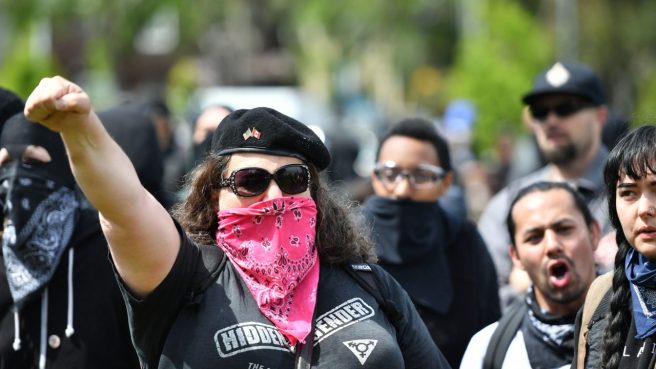 Middle-class champagne socialist/communist/anarchist white boys who don’t like nationalists or fascists. They consider themselves to be rebelling against the establishment, whilst upholding all of its ultra-politically correct views.

Antifa only dislike racism when its carried out by whites, and do not have the bottle to stand up against anti-white racism; leading to many people on the right to refer to them as ‘traitors’. I’d rather just call them morons.

Most are teenagers and university students who grow out of the fad when they start paying taxes. – The Urban Dictionary

Some Americans will be off of work for the Legal Holiday. Some won’t.

I’m lucky because it is a normal day off for me.

A group which calls itself  “The Revolutionary Abolitionist Movement” posted the following on their website on September 21st.

The battles lines have been drawn and white supremacists are on notice. White nationalist statues are crumbling all over the US as our collective revolutionary power is growing. As the monuments of white supremacist society fall we must continue to make it clear that their reign of terror is coming to an end.

For the occasion of Columbus Day, October 9th, one of the most vile ‘holidays’ of the year, the Revolutionary Abolitionist Movement is calling for collectives all over the country to take action against this day and in support of indigenous people in the US and abroad who have been victims of colonialism and genocide.

We are calling for groups to “decorate” their neighborhoods as they see fit: put up murals, wheatpaste posters, drop a banner, etc. On October 9th put a picture of your action on social media and use the hashtags below. With these actions multiplied around the country, we will make it unequivocally clear that revolutionaries will always stand with the indigenous!

Revolutionary greetings to the insurgent Zapatista communities, the Lakota warriors, the Mapuche fighters, and all of our indigenous comrades in the struggle. With these actions, we renew our commitment to building a revolutionary movement strong enough to turn the tide permanently.

The Revolutionary Abolitionist Movement is a political movement dedicated to freeing people from bondage and building resistance in the United States. We situate our political movement in the context of the abolitionist struggle against slavery and continue in the tradition, from Nat Turner to the Black Liberation Movement. We believe the Civil War was never resolved and the system of slavery transitioned into the prison industrial complex. Our struggle today must begin from this starting point. Lastly, as revolutionary anarchists, the abolitionist struggle must be extended to the state and capitalism, the perpetrators of oppression. The revolutionary movement in the US today is at a cross roads, as fascist movements are expanding, and the state becomes increasingly authoritarian. The Rojava Revolution, in northern Syria, provides us with a model for revolution today with its foundation in communal and council based political organization and militant defense.

Just like every other Antifa group, they oppose white supremacy, racism, and bigotry. Seems reasonable, right? But read a little further into their “Political Foundation” and you will find a few things that aren’t so reasonable.

They advocate for the abolition of gender:

They advocate for the expropriation of good, lands, and tools:

And finally, just like every other Antifa group, they oppose capitalism and are open proponents of communism.

If this wasn’t enough, RAM has been conducting a series of workshops at their Brooklyn, NY branch designed to radicalize a new generation of revolutionaries. These include an “Introductory Class” a “Legal Training” workshop, an “Introduction To Anarchism” class, and even an “Our Enemies in Blue” anti-police workshop.

As I write this, New York’s Finest are standing guard over the statue of Christopher Columbus in the Big Apple, in order to insure that these whack jobs do not deface it as planned.

“RAM” and all of the other Antifa Groups are following the teaching of Saul Alinsky and Adolph Hitler, and picking a target, in this case, the legal and fair election of Donald J. Trump as president of the United States of America, as an excuse for their “Revolution”, in an attempt to “get what’s coming to them”.

Like Hitler did his followers, the Leaders of these “Revolutionaries” are promising prosperity to all who follow them.

And, like these type of movements, there seems to be an endless supply of “Useful Idiots”.

Of course, the irony is, they are being funded by a “Secret Power Broker”, such as the Puppet Master himself, George Soros.

The problem that these “Revolutionaries” are facing is the fact that they remain in the minority.

The majority of Americans disagree with them.

Otherwise, Hillary Clinton would have won the Presidency.

If you try to talk to a Liberal about this New Fascism, they will deny that there is any fascism going on at all. In fact, they will tell you that this is “the will of the people” and they will site Democratically-stacked push polls in order to back their opinion up.

They have no “home training”, either.

These “spoiled brats”, like the Former Imperious President whom they worshipped as a living deity, do not care about the “Will of the People”, but, rather, they are intent on implementing and enforcing their Far Left Political Ideology, resulting in a “Tyranny of the Minority”, which we are seeing play out, as they attempt to hold on to the perceived power which they had under Obama’s failed presidency, while they collected their “FREE STUFF” bestowed upon them by the “benevolent masters” of the Democrat Party, by trying to somehow block Donald J. Trump’s following through on his Campaign Promises to the American People.

The use of Karl Marx/Saul Alinsky-inspired “Class War Politics”, including “Racial Rhetoric”, and Barack Hussein Obama’s own petulant, belligerent personality of a 12-year-old, has inspired these “protestors”, leading to a divided nation, the likes of which has not been seen since “The War of Northern Aggression”.

These protestors, in their immature, ego-driven rage, do not comprehend our nation’s Constitution, which they firmly believe is an antiquated “Dead ” document, with no more worth than a normal everyday piece of paper.

That Sacred Document, our United States Constitution, gives each of us the right, including the average Americans who live between the coasts and who elected President Trump, to speak our minds and be heard.

It gives those protestors that right, too…but, not at the expense of others, or damaging property like the fascist communists of Lenin’s Revolution, whom they are seeking to emulate through their attempts to circumvent the Constitution of the United States of America.

Their actions are far from noble. They are the actions taken by miserable little cowards who simply cannot accept that the majority of Americans do not believe the way that they do.

It is also called FASCISM.

If they do not like it here, they are free to leave.

And don’t let the screen door hit ya where the Good Lord split ya.