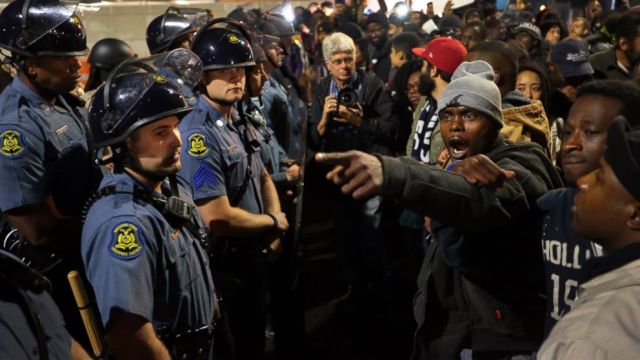 However, per usual, the Main Stream Media is only allowing their audience to see the tip of the iceberg.

Dan Gray, a local news reporter in St. Louis, Missouri, saw his life flash before his eyes when an angry mob of Black Lives Matter thugs surrounded him on Friday afternoon.

“Scariest moment in my career,” Gray recounted on Twitter. “Protesters upset about not-guilty verdict for an officer accused of killing a suspect, turn on me and media.”

Gray later told Fox 2 he was hit by three water bottles, including one hurled at the back of his head.

The protesters were furious after federal judge Timothy Wilson found Jason Stockley, a white police officer, not guilty in the 2011 shooting death of Anthony Lamar Smith, a black man.

During his 28 years on the bench, Judge Wilson has ruled both for and against police, and has a reputation for fair-mindedness.

As protests and angry confrontations with police erupted across St. Louis, Gray was besieged by Black Lives Matter thugs simply for doing his job. And apparently, for being a white male.

“You know you shouldn’t be over here!” one angry man yelled at Gray. “You should get your ass back where you belong! Get ‘yo ass away! Get the f-ck out of our movement!”

Dan Gray escaped uninjured. But the incident is emblematic of the escalating racial tensions raging across the United States.

Fueling the racial animus is reckless, inflammatory rhetoric by the irresponsible mainstream media, which label anyone they disagree with as “racist,” “white supremacists,” or “neo-Nazis.”

Case in point: ESPN’s Jemele Hill, who maliciously defamed President Trump and his entire administration — including renowned black neurosurgeon Dr. Ben Carson — as “white supremacists.” You don’t even have to be white to be labeled a white supremacist by today’s radical-left moonbats.

Rioting and violent protests erupted nationwide after a grand jury refused to indict Wilson, saying he acted in self-defense. Residents of the predominantly black community of Ferguson, Missouri, claimed officer Wilson was let off because of systemic racism.

Watching the demonstrations on Friday Night and reading about yesterday’s activities, the comparisons to Michael Brown and Ferguson, and the involvement of Black Lives matter, one name…one very evil name…came to my mind.

And, with good reason.

According to The Free Thought Project,

Washington, D.C. – Billionaire globalist financier George Soros’ MoveOn.org has been revealed to be a driving force behind the organizing of nationwide protests against the election of Donald Trump — exposing the protests to largely be an organized, top-down operation — and not an organic movement of concerned Americans taking to the streets as reported by the mainstream media.

In light of the protests and rioting that have transpired since the election of Trump, a closer analysis of the dynamic at play is warranted to gauge whether it’s an organic grassroots movement, or something much more organized, sophisticated and potentially dangerous.

“Americans to Come Together in Hundreds Peaceful Gatherings of Solidarity, Resistance, and Resolve Following Election Results

Hundreds of Americans, dozens of organizations to gather peacefully outside the White House and in cities and towns nationwide to take a continued stand against misogyny, racism, Islamophobia, and xenophobia.

Tonight, thousands of Americans will come together at hundreds of peaceful gatherings in cities and towns across the nation, including outside the White House, following the results of Tuesday’s presidential election.

The gatherings – organized by MoveOn.org and allies – will affirm a continued rejection of Donald Trump’s bigotry, xenophobia, Islamophobia, and misogyny and demonstrate our resolve to fight together for the America we still believe is possible.”

Within two hours of the call-to-action, MoveOn members had created more than 200 gatherings nationwide, with the number continuing to grow on Wednesday afternoon.

Now come reports from various protest locations that reveal a substantially coordinated effort, and not the organic grassroots showing by concerned Americans, as the mainstream media is reporting. Photos from Austin, Texas reveal a line of busses the “protestors” arrived in, making their appearance seem substantially less than organic – with a direct implication of being strategically orchestrated

For those of you who are unfamiliar with them, MoveOn.org was formed in 1998 as a supposedly “bipartisan e-mail group” in order to send a petition to Congress to “move on” past the planned  impeachment of President Clinton. It rose to national prominence for its strong disapproval of the 2003 invasion of Iraq.

In 2016, after funding the election of the worst United States President in History, Barack Hussein Obama (mm mmm mmmm), the “Evil Puppetmaster” began financing the racist movement known as Black Lives Matter, which during his Presidential Campaign, joined with MoveOn.org, in an effort to violate the First Amendment Rights of Donald J. Trump and to prevent him from becoming President of the United States of America.

Soros and his minions failed.

Now, they are attempting to exact their revenge through a series of orchestrated marches featuring paid participants.

It is through this “philanthropic activity” that Soros continues to fund  these exhibitions of “civil unrest”, the seeds of which were planted in Ferguson, Missouri.

So, why is the “Evil Puppetmaster” pouring so much into this Manufactured “Disrupt Trump’s Presidency” Movement?

So, President Trump will not be able to function effectively and get rid of the seeds of Marxist Government, which were planted during the Obama Administration.

As I have previously written, I firmly believe that America is now fighting a new war against fascism.

It’s not a war that is being fought fought with guns and bullets, But instead with state referendums, Congressional votes, Executive Orders, judicial activism, and FAR Left-sponsored and organized Political Activists.

And, it’s not our Brightest and Best who are dying on this field of battle, but rather, it is our Constitutional Freedoms which are dying an ignoble death, pierced by the arrows of socialism and political correctness.

Whether Soros and his paid-off “Special Snowflakes” like him or not, does not matter. Donald J. Trump was legally elected as the next President of the United States of America.

For these Soros-funded, fascist “New Bolsheviks”, to attempt to circumvent the will of the American People though these Orchestrated protests is an exercise in intimidation that has not been seen since the days of the Russian Revolution and Germany’s National Sociality Party.

Of course, as I have written repeatedly, do not attempt to tell a Modern American Liberal that.

After all, it’s not Fascism when they do it.

2 thoughts on “BLM is Fanning the Flames of Racial Division in Missouri…Again. Who is Bankrolling Them?”