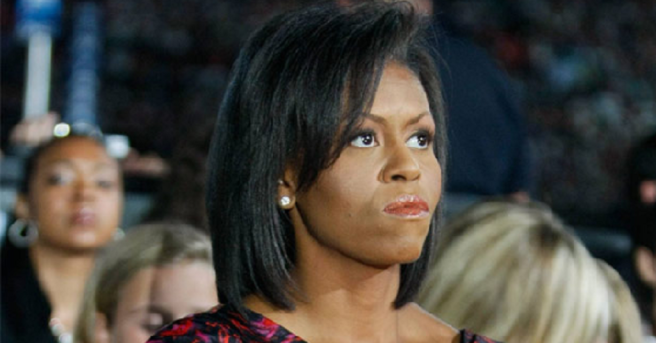 Everything that is done in the world is done by hope. – Martin Luther

First lady Michelle Obama’s suggestion that the United States has lost hope now that Donald Trump has becoming president after eight years of husband President Obama bringing “hope and change” to Americans was met Saturday with some pushback.

Michelle Obama says there is no hope,” Trump, the Republican president-elect, said at a rally in Alabama. “I assume she was talking about the past not the future. I honestly believe she meant that statement differently than the way it came out.”

Obama said in an excerpt of her final White House interview, conducted by Oprah Winfrey: “We feel the difference now. … Now we’re feeling like what not having hope feels like. … What do you do if you don’t have hope, Oprah?”

The full interview is scheduled to air Monday on CBS-TV.

President Obama was a first-term Illinois Democratic senator when he won the White House race in 2008 with a captivating message of hope and change and became the country’s first black president.

“Barack didn’t just talk about hope because he thought it was a nice slogan to get votes,” the first lady said in the CBS interview. “He and I and so many believe: What else do you have if you don’t have hope?”

The first lady during her time in the White House made top priorities of empowering young women and promoting healthy eating habits.

She argued in the interview that children are the ones who most need hope.

And to try to explain how her husband gave Americans hope, she said he was like the soothing parent who didn’t overreact when a child bumps his or her head on a table.

“Barack has been that for the nation,” the first lady said.

On January 23rd, 2008, during a speech given in Columbia, South Carolina, Michelle Obama said:

We don’t like being pushed outside of our comfort zones. You know it right here on this campus. You know people sitting at different tables, y’all living in different dorms. I was there. Y’all not talking to each another, taking advantage of the fact that you’re in this diverse community because sometimes it’s easier to hold onto your own stereotypes and misconceptions, it makes you feel justified in your ignorance. That’s America. So the challenge for us is, are we ready for change?

Then, in February of 2008, while campaigning for her husband in Wisconsin, Mrs. Obama said:

Let me tell you something. For the first time in my adult life, I am proud of my country, because it feels like hope is finally making a comeback.

And let me tell you something. I need to believe that we live in that kind of nation, where hope and possibility and unity is still what drives us.

She made the “proud” comment twice in 2 different speeches.  David Axlerod, Obama’s Chief Strategist, tried to explain it away at the time, saying:

She gives this talk all the time, and I don’t think she formulates the words quite that way generally. But if you look at the whole quote and read beyond it, she was plainly talking about this burst of participation, this sense of hope, the sense of possibility and so on. And she was talking about the politics of our country.

In an article titled “The Other Obama”, published on March 10, 2008, in The New Yorker Magazine, writer Lauren Collins gives us the following insights into the Future First Lady’s true feelings about America:

The four times I heard her give the speech—in a ballroom at the University of South Carolina, from the pulpit of Pee Dee Union, at an art gallery in Charleston, and in the auditorium of St. Norbert College, in De Pere, Wisconsin—its content was admirably consistent, with few of the politician’s customary tweaks and nods to the demographic predilections, or prejudices, of a particular audience.

Obama begins with a broad assessment of life in America in 2008, and life is not good: we’re a divided country, we’re a country that is “just downright mean,” we are “guided by fear,” we’re a nation of cynics, sloths, and complacents. “We have become a nation of struggling folks who are barely making it every day,” she said, as heads bobbed in the pews. “Folks are just jammed up, and it’s gotten worse over my lifetime. And, doggone it, I’m young. Forty-four!”

From these bleak generalities, Obama moves into specific complaints. Used to be, she will say, that you could count on a decent education in the neighborhood. But now there are all these charter schools and magnet schools that you have to “finagle” to get into. (Obama herself attended a magnet school, but never mind.) Health care is out of reach (“Let me tell you, don’t get sick in America”), pensions are disappearing, college is too expensive, and even if you can figure out a way to go to college you won’t be able to recoup the cost of the degree in many of the professions for which you needed it in the first place. “You’re looking at a young couple that’s just a few years out of debt,” Obama said. “See, because, we went to those good schools, and we didn’t have trust funds. I’m still waiting for Barack’s trust fund. Especially after I heard that Dick Cheney was s’posed to be a relative or something. Give us something here!”

Her expensive tastes, during his time as “First Lady”, which include Wagyu Beef and Lobster, her penchant for taking the most expensive vacations ever imagined by man (with larger entourages than an NBA Player), along with her attempts at telling Americans what we HAVE to feed our children and grandchildren, and how we should be raising them, have not exactly endeared herself to the overwhelming majority of Americans.

Past First Ladies always took a cause to tackle during their husbands’ terms.

Usually, it was a non-intrusive cause such as literacy or combating hunger in America.

Not, in the case of our globe-trotting (on our dime) soon-to-be Former First Lady, “Moochelle” Obama.  Under the guise of battling Childhood Obesity, she decided to sic the food police on America’s school menus, turning our children into the Liberal Administrations’ own personal lab rats and overruling the parental authority of the average American Family.

Mrs. Obama eventually had to adjust her diet plan, because children were not receiving enough nourishment from her Diet Plan and literally falling out by the middle of the afternoon.

In response to this danger to the health of their students, several school systems across the nation told the First Lady what she can do with her non-nutritious Diet Plan, including the Liberal Bastion of New York State!

Most of the other First Ladies in my 58 years have brought a certain degree of class and decorum to their unelected position as “FLOTUS”.

Quite frankly, all of us out here in the Heartland, think she stinks on ice.

For Michelle Obama to drop her carefully concealed mask of racial tolerance this late in the game, with still time left in her husband’s presidency, shows how little regard she has, not only for the decorum of her position, but, for the well-being of America and her citizens, both black and white.

With a little over a month left before “Mooch” leaves her Palatial Digs at 1600 Pennsylvania Avenue, Console yourselves that after President-elect Trump takes the Oath of Office on January 20, 2017, we will all be singing the Country song made famous years ago by the great performer, Roy Clark….