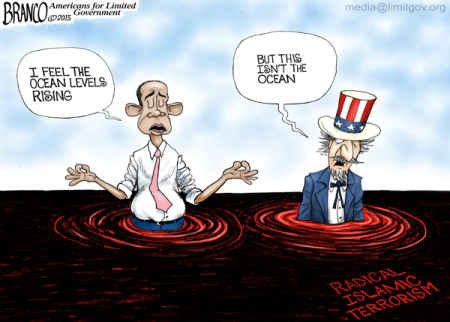 Yesterday, Presumptive Republican Presidential Candidate Donald J. Trump spoke to the nation about the horrific Saturday Night Massacre at a Gay Club in Orlando, in which 49 Americans were killed and 53 were injured by an Islamic Terrorist.

He said in this Presidential-sounding speech that

…If we don’t get tough, and we don’t get smart – and fast – we’re not going to have a country anymore — there will be nothing left.The killer, whose name I will not use, or ever say, was born to Afghan parents who immigrated to the United States. His father published support for the Afghan Taliban, a regime which murders those who don’t share its radical views. The father even said he was running for President of that country.

The bottom line is that the only reason the killer was in America in the first place was because we allowed his family to come here.

That is a fact, and it’s a fact we need to talk about.

We have an incompetent administration, and if I am not elected President, that will not change over the next four years — but it must change, and it must change now.

With fifty people dead, and dozens more wounded, we cannot afford to talk around the issue anymore — we have to address it head on.

I called for a ban after San Bernardino, and was met with great scorn and anger but now, many are saying I was right to do so — and although the pause is temporary, we must find out what is going on. The ban will be lifted when we as a nation are in a position to properly and perfectly screen those people coming into our country.

I will use this power to protect the American people. When I am elected, I will suspend immigration from areas of the world when there is a proven history of terrorism against the United States, Europe or our allies, until we understand how to end these threats.

After a full, impartial and long overdue security assessment, we will develop a responsible immigration policy that serves the interests and values of America.

We cannot continue to allow thousands upon thousands of people to pour into our country, many of whom have the same thought process as this savage killer.

Again, common sense stuff, coming from a man who would be our President. Very Refreshing.

However, America’s problem is the fact that we have Second Generation Radical Islamists living among us.

According to an article found in The Washington Times,

While immigrants draw much of the attention, it’s their children who are proving to be the most fruitful recruiting ground for radical jihad in the U.S., accounting for at least half of the deadly attacks over the past decade.

The latest instance of the second-generation terrorist syndrome played out in Orlando, Florida, over the weekend when Omar Mateen, son of immigrants from Afghanistan, went on a jihad-inspired rampage, killing 49 people and wounding 53 others in the worst mass shooting in U.S. history.

Authorities said Mateen had flirted with other terrorist groups but declared his allegiance to the Islamic State on Sunday morning as he began his horrific spree.

He follows in the footsteps of Syed Rizwan Farook, one of the San Bernardino, California, terrorists who was the son of Pakistanis; Nadir Soofi, one of two men who attacked a drawing competition in Garland, Texas, last year and whose father was from Pakistan; and then-Maj. Nidal Hassan, the child of Palestinian immigrants whose shooting rampage at Fort Hood, Texas, in 2009 set off the modern round of deadly lone-wolf attacks.

In other cases, attackers were immigrants brought to the U.S. as young children. They grew up in the U.S. but were besieged by questions of identity.

“Historically, the ‘high stress’ generation for American immigrants has been second generation,” said former CIA Director Michael V. Hayden. “Mom and Pop can rely on the culture of where they came from. Their grandchildren will be (more or less) thoroughly American. The generation in between, though, is anchored neither in the old or in the new. They often are searching for self or identity beyond self.”

The Sept. 11, 2001, hijackers were all foreigners who gained entry to the U.S. on visas, sparking a heated and still-running debate over the role of borders in trying to keep out would-be attackers.

But the second-generation killers pose a different issue: how to keep children of immigrants from abandoning the precepts of their adopted home.

Presumptive Republican presidential nominee Donald Trump said Monday that the issues are one and the same.

“The bottom line is that the only reason the killer was in America in the first place was because we allowed his family to come here. That is a fact, and it’s a fact we need to talk about,” Mr. Trump said in a speech in New Hampshire.

He revised his call for a temporary ban on admitting Muslims to the U.S., saying it would apply only to travelers from regions connected to terrorism. He said the ban would end once the U.S. has a better idea of who is coming and what values they hold.

Mr. Trump said immigrants from Afghanistan — the home of Mateen’s parents — overwhelmingly “support oppressive Sharia law,” which he said is anathema to American values of diversity. Indeed, Mateen’s father suggested that the killer may have been set off by having seen two men kissing. Mateen’s massacre targeted a gay nightclub.

But some researchers suggest the link to religion is less important than the marginalization immigrants and first-generation Americans may feel. In a study last year funded by the Homeland Security Department, researchers said those who felt instances of discrimination, personal shame or humiliation had higher propensity toward radicalization.

Some policymakers bristle at connecting terrorist attacks to immigration, and it’s difficult to know the outlines of the connection.

Sen. Jeff Sessions, Alabama Republican, and Sen. Ted Cruz, Texas Republican, have repeatedly asked the Homeland Security Department for immigration information on those implicated in recent terrorist plots, but they said they have yet to get a “substantive” response.

That leaves the public blind, Mr. Sessions said in a statement Monday.

“While the vast majority of Muslims are law-abiding and peaceful, we must face the uncomfortable reality that not only are immigrants from Muslim-majority countries coming to the United States, radicalizing, and attempting to engage in acts of terrorism, such as in Boston and Chattanooga; but also, their first-generation American children are susceptible to the toxic radicalization of terrorist organizations,” Mr. Sessions said.

If you were watching Saturday morning cartoons in 1977 on ABC, you would have seen this Schoolhouse Rock musical cartoon titled The Great American Melting Pot.  It extolled the unique greatness of  our American Heritage.
For a while now, that heritage has been under attack. And, that attack by enemies foreign and domestic has been aided and abetted by President Barack Hussein Obama, the individual who is responsible for maintaining our nation’s safety, security, and sovereignty.

Remember the celebrated young Muslim kid named Ahmed Mohammed, who received a suspension from a school in Irving, Texas for building a clock, which resembled a bomb?

Liberals all of the nation were up in arms about this perceived “stereotyping”.

In fact, so much notoriety was generated that he and his family were invited to the White House by Obama himself.

Then, the plot sickened.

The young clockmaker’s father turned out to be a Muslim Activist, with a long history of getting his mug in front of the cameras.

Additionally, the fact that Barack Hussein Obama sent his congratulations tweet out before the photo of the actual device made the national headlines, was suspicious at best, and condemning at worst.

This would not be the first stunt like this that Obama had pulled, in order to make the American public more comfortable with Muslims living among us.

This sort of covert White House-sponsored charade has been par for the course during Obama’s tenure as president.

However, thanks to the World Wide Web, it is not as easy for him to pull the wool over Americans eyes as it used to be.

The most current example being his lame, un-presidential reaction to Saturday Night’s Terrorist Attack, in which America’s Dhimmi-in-Chief, blamed our Second Amendment Right to Bare Arms, instead of the Muslim responsible for savagely murdering 49 Americans.

Just like the young “clockmaker”, Mateen was raised to be loyal to Radical Islam, not the United States of America, the nation which graciously took him and his family in.

And, as far as Obama goes, the truth of the matter is, his blatant refusal to identify Radical Islam as our enemy does not make him look open-minded and magnanimous. Rather, it makes the President of the United States of America look close minded and duplicitous.

Americans are a very accepting people, but that acceptance hinges on those coming into our society, pledging their loyalty to our nation, and having respect for our Traditional Values and American Way of life.

Obama’s attempt to turn the Great American Melting Pot into the Tower of Babel, in the name of “diversity”…and Democratic Voters….has not only failed…it has turned the street of America into a “Killing Field”, reminiscent of the Cambodian Massacres under the brutal dictator, Pol Pot.

The Immigration Act of 1924 was passed because America had experienced an overwhelming flood of immigrants, which strained the resources of our nation.
This act allowed all of these immigrants to be assimilated into American Society and to actually become Americans, in thought, word, deed, and LOYALTY.
Later, Liberal President Jimmy Carter stopped Iranians from immigrating, because, just like the situation we faced today with Radical Islam, we were AT WAR.
In fact, Obama and his Administration are themselves actually restrictive in whom they allow to immigrate to America., refusing the entry of Middle Eastern Christians, who are attempting to escape for certain death at the hands of Radical Islamists.
The only reason that Obama, Clinton, and the rest of the Democrat Elite are mad at Donald J. Trump’s Proposal to restrict the immigration of those who would kill us, is that he is attempting to thwart their plans to rapidly import thousands of Muslims, and potential Democrat Voters, into our country.
They could care less about the results of their avarice.
Like all Liberals, they remain oblivious of their own callous hypocrisy.
Until He Comes,
KJ

2 thoughts on “They Live Among Us: Mateen, the Irving, Texas “Clockmaker Kid”, and the Rise of Homegrown Radical Islamists”