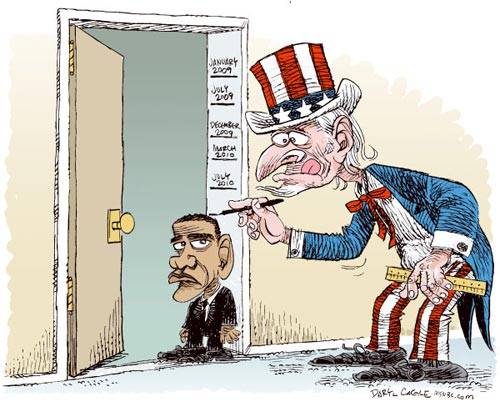 Washington (CNN) – President Barack Obama has a message for Donald Trump — being president is tougher than being on a reality show and the American people are too “sensible” to elect him.

“I continue to believe Mr. Trump will not be president,” Obama said at a news conference in California after a meeting with southeast Asian leaders. “And the reason is that I have a lot of faith in the American people. Being president is a serious job. It’s not hosting a talk show, or a reality show.”

He went on: “It’s not promotion, it’s not marketing. It’s hard. And a lot of people count on us getting it right.”

Obama offered surprisingly frank assessments of the campaign to replace him, taking shots at Ted Cruz and Marco Rubio. He also hinted hint that he was sympathetic to Hillary Clinton’s position on the difficulty of enacting political change, as she faces a tough challenge from a candidate in Bernie Sanders, who has fired up Democratic primary voters who are demanding sweeping reform.

But it was the potential of a Trump administration that Obama seemed most eager to critique.

The presidency isn’t “a matter of pandering and doing whatever will get you in the news on a given day. And sometimes, it requires you making hard decisions even when people don’t like it,” Obama said, adding that whoever succeeds him needs to be able to reflect the importance of their office and give foreign leaders confidence he or she knows their names and something about their nations’ histories. Obama also appeared to raise the question of whether Trump was prepared to be commander-in-chief.

“Whoever’s standing where I’m standing right now has the nuclear codes with them, and can order 21-year-olds into a firefight, and (has) to make sure that the banking system doesn’t collapse, and is often responsible for not just the United States of America, but 20 other countries that are having big problems, or are falling apart and are gonna be looking for us to something.”

He added: “The American people are pretty sensible, and I think they’ll make a sensible choice in the end.”

Trump responded to Obama during an event in Beaufort, South Carolina.

“He has done such a lousy job as president,” Trump said, before adding that he didn’t mind being targeted by Obama, saying he took it as a “great compliment.”

Trump wasn’t the only Republican who took a shot from the President.

When he bemoaned Republican warnings that his nominee to replace late Justice Antonin Scalia on the Supreme Court would not even get a hearing, Obama rebuked people who claim to be “strict interpreters” of the Constitution — except regarding his right to propose a nominee.

That seemed to be a clear jab at Cruz, who has helped lead calls to prevent the president installing a nominee who could tilt the ideological balance of the court to the left.

Rubio also came under fire when the president mocked “a candidate who sponsored a bill, that I supported, to finally solve the immigration problem, and he’s running away from it as fast as he can.”

The President stepped more carefully when he was asked about the Democratic race. He opened by making it look like he was delivering a veiled endorsement of Clinton, who is facing a stronger than expected challenge from Sanders.

“You know, I know Hillary better than I know Bernie, because she’s served in my administration, and she was an outstanding secretary of state. And I suspect that, on certain issues, she agrees with me more than Bernie does,” Obama said.

But then added: “On the other hand, there may be a couple issues where Bernie agrees with me more. I don’t know, I haven’t studied their positions that closely.”

Obama who, like Sanders, once wowed young Democrats with soaring calls for change in the 2008 election, also appeared to give credence to Clinton’s election argument that pushing through fundamental reforms is harder than it looks.

“Ultimately, I will probably have an opinion on it, based on both — (having) been a candidate of hope and change and a President who’s got some nicks and cuts and bruises from — you know, getting stuff done over the last seven years.”

Obama was clear on one thing — he’s happy not to be in the race himself.

“The thing I can say unequivocally,” he said, “I am not unhappy that I am not on the ballot.”

Considering that you are about a popular with Americans as Michael Moore is with All-you-can-eat Buffets, I’ll bet you’re not, Mr. President.

That’s a nice Glass House you’ve got there, Skippy.

Let’s take a moment and look at your less-than-stellar track record before your “Sponsors” cleaned you up and foisted you upon the American People. shall we?

The following FACTS are contained in my post, “The Great Disconnect: The Whole, Ugly Truth About Barack Hussein Obama”…

Per Byron York in an article found at nationalreview.com:

Community organizing is most identified with the left-wing Chicago activist Saul Alinsky (1909-72), who pretty much defined the profession. In his classic book, Rules for Radicals, Alinsky wrote that a successful organizer should be “an abrasive agent to rub raw the resentments of the people of the community; to fan latent hostilities of many of the people to the point of overt expressions.” Once such hostilities were “whipped up to a fighting pitch,” Alinsky continued, the organizer steered his group toward confrontation, in the form of picketing, demonstrating, and general hell-raising.

If you ask Obama’s fellow Community Organizers what his significant accomplishments were, they’ll say two things: the expansion of a city summer-job program for South Side teenagers and the removal of asbestos from one of the area’s oldest housing projects.  Those  were his biggest victories.

So, after 3 years of Community Organizing, Obama enrolled in Harvard Law School at the age of 27.  The question is:  How did he get the money for this?  In my article Why Haven’t I Heard of Khalid Al-Monsour? ,  I attempted to answer that question:

President Obama attended Harvard Law School from 1988 – 1991.  The average tuition during that time was $25,000 per year.  It would have cost $75,000 to attend there for 3 years.  As president of the Harvard Law Review, he received no stipend from the school, according to Harvard spokesman Mike Armini in a interview with Newsmax.

If numbers cited by the Obama Presidential Campaign for Scooter”s student loans are accurate, that means that Obama came up with more than $32,000 over three years from sources other than loans to pay for tuition, room and board.  Hmmmmm.

Along with the funding issue, very little is known about Obama’s time at Harvard Law School,and his sycophants in the Liberal hierarchy, Main Stream Media,  and even Harvard Law School Administrators have done a remarkable job in running interference against anyone trying to find out about it.

From Jodi Kantor’s article at nytimes.com:

He arrived there as an unknown, Afro-wearing community organizer who had spent years searching for his identity; by the time he left, he had his first national news media exposure, a book contract and a shot of confidence from running the most powerful legal journal in the country.

In 1995  “Bomber” Bill Ayers and his wife Bernadine Dohrn hosted a fund-raiser for Obama prior to Obama’s run for Alice Palmer’s seat in the state Senate  and Ayers donated $200 to Obama’s upcoming state Senate campaign.

In 1996 at age 34, he ran for the state Senate in dubious campaign that is barely known of, outside of Chicago.   Alice Palmer, the incumbent, had decided to run for Congress and supported Obama as her successor.   But after Palmer’s congressional campaign ran into trouble, she changed her mind and decided to run for re-election to the Illinois Senate after all. Obama refused to step aside and the melee ensued.  One of Scooter’s volunteers challenged whether Palmer’s nominating petitions were even legal.  Obama’s campaign pulled the same chicanery concerning the petitions of other candidates.  Palmer dropped out, and the other candidates were disqualified.   So,  Obama won unopposed in the Democratic primary—guaranteeing his victory in the general election.  This was truly an example of Chicago-style politics at it’s finest…or dirtiest.

Obama sponsored 121 bills as a senator, of which 115 never made it out of committee and 3 were successfully enacted.   He co-sponsored 506 bills during the same time period.

One and one half years after taking his seat in the U.S. Senate, Obama declared himself a candidate for the Democratic nomination as their representative in the 2008 Presidential Election.

And now, after 7 years of a failed presidency, Obama has the temerity to attacked a self-made billionaire, further degrading the Office of the President in the process.

This man has done such a bad job. He has set us back so far, and for him to say that is a great compliment, if you want to know the truth. A network called and wanted a response. I said, ‘You’re lucky I didn’t run last time when Romney ran, because you would have been a one-term president.’

The man may have a point.

According to the latest Reuters Poll, he still has a commanding lead over the other Republican Candidates, including Senator Ted Cruz…

With November rapidly approaching, the Democrat Party, including the President himself, are beginning to show signs of desperation and panic.

Look at their two top candidates, can you blame them?

You have a crazy old Socialist, who looks like Doc Emmett Brown from “Back to the Future”, who hasn’t held a real job in over 40 years and a Former First Lady/Carpetbagger New York Senator/Failed Secretary of State, with obvious Health Issues and no personality whatsoever, who is so dadburn mean that grass never grows again where she spits.

It’s really no surprise that the President of the United States attacked the Leading Presidential Candidate of the Opposition Party, yesterday.

Liberals will tell you whom they fear.