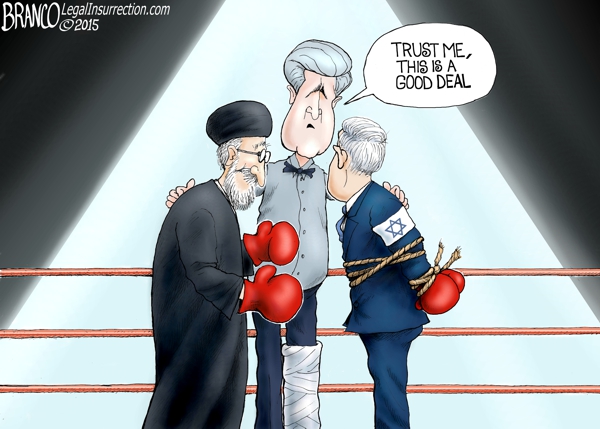 And you will hear of wars and rumors of wars. See that you are not alarmed, for this must take place, but the end is not yet. – Matthew 24:6 (ESV)

About that “Agreement of Iran” and how they are “co-operating”…

The Times of Israel reports that

“Our warships will soon berth at ports in the Atlantic Ocean,” Navy Commander Rear Admiral Habibollah Sayyari promised at a ceremony on Wednesday marking the return to port of Iranian warships that Fars said had taken part in joint drills with the Russian navy.

Sayyari said the Iranian vessels had been in the Caspian Sea and at the Russian port of Astrakhan. “The presence of Iranian warships in international ports shows the Iranian Navy’s prowess,” Fars quoted him saying.

Sayyari made a similar pledge to deploy warships in the Atlantic in early 2014. At the time, Iran promised to send its fleet close to American maritime borders as a counter to the US navy’s presence in the Gulf. But in April, the navy chief said the move had been canceled “due to a change in schedule.”

The US-Iran relationship remains tense and friction-filled, despite the US-led world powers’ deal with Iran, sealed in July, on curbing its nuclear program.

Iran’s supreme leader Ali Khamenei has repeatedly rejected any future talks on other issues, and ruled out normalization with the United States.

The former Iranian president Hashemi Rafsanjani was reported to have admitted this week that the country’s nuclear program was started with the intent of building a nuclear weapon, with the express consent and participation of Khamenei. “Our basic doctrine was peaceful usage of the nuclear technology although we never abandoned the idea that if one day we are threatened and it is imperative, we would have the capability for going the other path [to nuclear weapon] as well,” Rafsanjani reportedly said.

Regarding the “Agreement” which President Barack Hussein Obama and Secretary of State John Kerry reached with the Largest State Sponsor of Islamic terrorism in the World, Radio Free Europe Radio Liberty reported  on August 15th of this year that

Iranian Supreme Leader Ali Khamenei has said the Islamic republic’s opposition to the “arrogant” United States “will not change” despite a landmark nuclear agreement reached earlier this week with world powers.

The comments, broadcast live on state television on July 18, were greeted by chants of “Death to America” and “Death to Israel” at a ceremony at Tehran’s Mosala Mosque on the occasion of the Eid al-Fitr festival, which marks the end of Ramadan.

Meanwhile, U.S. President Barack Obama defended the accord amid skepticism from congressmen reviewing the deal.

Khamenei, who has the final say in all state affairs in Iran, said U.S. policy in the Middle East runs counter to Iran’s strategy and that Tehran will continue to support its allies in the region, including Lebanon’s Hizballah militant group and the regime of Syrian President Bashar al-Assad.

“Whether this [nuclear deal] is approved or disapproved, we won’t stop supporting our friends in the region,” he said. “The oppressed Palestinian nation, Yemen, Syria, Iraq, Bahrain, the honest resistance fighters in Lebanon and Palestine will enjoy our constant support.”

“Even after this deal our policy toward the arrogant U.S. will not change,” Khamenei added.

Khamenei maintained that Iran’s engagement with six world powers was solely to reach a nuclear deal that was in its national interest.

“We do not negotiate with the United States on various global, regional, or bilateral issues,” Khamenei said. “Sometimes — based on expedience — we have talked to them on exceptional matters, such as the nuclear issue, and it has not been only this one time.”

“U.S. policies in the region are 180 degrees in contrast to Iran’s policies,” he added.

Under the deal agreed in Vienna on July 14 after years of negotiations, sanctions against Tehran, which have hampered Iran’s economy, will be gradually removed in return for the Persian Gulf state accepting long-term curbs on its nuclear program. The talks involved Iran and the five veto-wielding Security Council members — the United States, Russia, China, Britain, and France — as well as Germany and the European Union.

Khamenei reiterated that position on July 18, mentioning a fatwa, or religious edict, he himself issued against any action seeking the bomb.

“The Americans say they stopped Iran from acquiring a nuclear weapon,” he said. “They know it’s not true.”

There was another famous “bad deal” in history, made by a “World Leader”, who also sacrificed his country’s safety, in his purposeful obtuseness and naiveté.

The speech, “Peace in Our Time”, was delivered by British Prime Minister Neville Chamberlain in 1938, in defense of the Munich Agreement, which he made with those infamous barbarians, German Chancellor Adolf Hitler and the National Socialist Party, or as the world came to call them, the Nazis, and Hitler’s good buddy, the Italian Fascist, Benito Mussolini.

The following is an excerpt:

…I would like to say a few words in respect of the various other participants, besides ourselves, in the Munich Agreement. After everything that has been said about the German Chancellor today and in the past, I do feel that the House ought to recognise the difficulty for a man in that position to take back such emphatic declarations as he had already made amidst the enthusiastic cheers of his supporters, and to recognise that in consenting, even though it were only at the last moment, to discuss with the representatives of other Powers those things which he had declared he had already decided once for all, was a real and a substantial contribution on his part. With regard to Signor Mussolini, . . . I think that Europe and the world have reason to be grateful to the head of the Italian government for his work in contributing to a peaceful solution.

In my view the strongest force of all, one which grew and took fresh shapes and forms every day war, the force not of any one individual, but was that unmistakable sense of unanimity among the peoples of the world that war must somehow be averted. The peoples of the British Empire were at one with those of Germany, of France and of Italy, and their anxiety, their intense desire for peace, pervaded the whole atmosphere of the conference, and I believe that that, and not threats, made possible the concessions that were made. I know the House will want to hear what I am sure it does not doubt, that throughout these discussions the Dominions, the Governments of the Dominions, have been kept in the closest touch with the march of events by telegraph and by personal contact, and I would like to say how greatly I was encouraged on each of the journeys I made to Germany by the knowledge that I went with the good wishes of the Governments of the Dominions. They shared all our anxieties and all our hopes. They rejoiced with us that peace was preserved, and with us they look forward to further efforts to consolidate what has been done.

Ever since I assumed my present office my main purpose has been to work for the pacification of Europe, for the removal of those suspicions and those animosities which have so long poisoned the air. The path which leads to appeasement is long and bristles with obstacles. The question of Czechoslovakia is the latest and perhaps the most dangerous. Now that we have got past it, I feel that it may be possible to make further progress along the road to sanity.

We all know what happened next:  World War II.

That’s what happens when you strike an “Gentlemen’s Agreement” with barbarians, liars, and madmen.

As I have written before, I believe that Obama’s zeal to leave some sort of enormous historical legacy has led to a purposeful naiveté and obtuseness on his part, not only to history, but also, to the present wishes and wellbeing of not only those who have be maimed, slaughtered, and who still live under these repressive regimes that he has dealt with, but, also, to the continued sovereignty and very existence of the United States of America.

The Mad Mullahs of Iran do not play by the Marquis of Queensbury Rules, like “civilized countries” do.

They only respect strength and resolve.

Unfortunately, Obama and Kerry showed them neither of those qualities, during their negotiations.

Hence, their continued rhetoric, the threatened dispatching of a fleet of warships.

…and, the faint sound of uncontrollable laughter.

God protect His Chosen People …and us.

One thought on “Iran to Berth Warships at Ports in the Atlantic Ocean…Some “Deal”. Smart Power!”