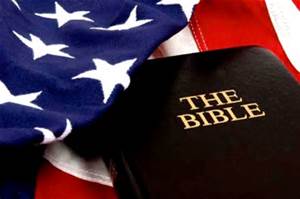 For the last couple of weeks, I have been attempting to find a particular Christian Poster, to place in my study/music room/man cave, which my bride has given me in our new house.

In my search, I found out that Walmart no longer carries Christian Posters. So, I had a friend who runs a local sign company to make me one from an image on the Internet.

Between my personal experience and the story recently about a High School Band getting in trouble for playing a Christian Hymn at half-time of a football game, it brought to my attention, once again, that there is a concerted effort to minimize America’s Christian Heritage in our day-to-day lives.

This effort is getting more overt every day…

As a Christian American Grandfather, I worry about what my 7-year old grandson is exposed to, while attending a public school.

Given the nature of Modern American Society, and a Liberal-run Federal Department of Education, with Modern American Liberals interspersed among America’s hard-working, underpaid professional teachers, from time to time, outrageous things can be presented to our young people as “factual information”.

Middle school parents in Tennessee are voicing concern with the Maury County School District after they discovered that their students were instructed to write “Allah is the only god” in order to translate the Islamic pillar of creed for a world history project.

After Brandee Porterfield’s seventh-grade daughter brought home her Five Pillars of Islam project that she completed for her history class, which included the translation of the pillar of “Shahada” as being “There is no god but Allah; Muhammad is the Messenger of Allah,” Porterfield complained to officials at Spring Hill Middle School.

Although Porterfield does not object to her child being taught details on the Islamic religion, she does oppose the fact that her daughter’s history unit has not yet taught her about theological components of Christianity or Judaism. Porterfield believes that the state mandated history curriculum’s overexposure to Islam is tantamount to state sponsorship of Islam.

“It really did bother me that they skipped the whole chapter on the rise of Christianity and they spent three weeks just studying Islam,” Porterfield told Fox News.

“But what really did bother me, because I understand that Islam needs to be discussed in history, was that they did this assignment where they wrote out the Five Pillars of Islam, including having the children learn and write the Shahada, which is the Islamic conversion creed.”

Although Porterfield claims that the history unit spent all of three weeks going over Islam, Jan Hanvey, Maury County Public Schools’ middle school supervisor, told the Columbia Daily Herald that most of the three-week unit discussed things like government, culture, geography and economics, not theology. Hanvey also stated that the chapters on Christianity and Judaism are scheduled to be taught at the end of the year with the “Age of Exploration” unit. They were not “skipped” over like Porterfield claimed.

Porterfield and other concerned Springhill parents will have the opportunity to voice their concerns about the state’s history curriculum as a meeting with teachers and administrators is set for Sept. 17.

Joy Ellis, another parent of a seventh grader at Spring Hill, asserts that Christian children should not be instructed to write the Shahada.

“This is a seventh grade state standard, and will be on the TCAP,” Ellis told the Spring Hill Home Page. “I didn’t have a problem with the history of Islam being taught, but to go so far as to make my child write the Shahada, is unacceptable.”

Maury County Director of Schools, Chris Marczak, defended the curriculum in a statement, saying that the school system is in no way endorsing Islam over other religions or trying to “indoctrinate” students.

“Our teachers work together to make sure that our students are learning what is expected through the Tennessee academic standards. For this last section on the Islamic world this past week, our educators had students complete an assignment that had an emphasis on Islamic faith,” Marczak said.

“The assignment covered some sensitive topics that are of importance to Islamic religion and caused some confusion around whether we are asking students to believe in or simply understand the religion. It is our job as a public school system to educate our students on world history in order to be ready to compete in a global society, not to endorse one religion over another or indoctrinate.”

Despite Marczak’s assertion that the curriculum is not endorsing Islam, Porterfield is still not convinced.

“I do think that because they are not doing any other religion studies. I do think it is the state sponsoring religion in schools. They are not going over anything else. So for the students to have to memorize this prayer, it does seem like it is indoctrination,” Porterfield said. “Later on, I reviewed the state standards and the pacing guide for this class. They do have some studies on Hinduism, Buddhism and things like that, but they are not learning any other doctrines or creeds and that is what my concern was.”

First off…while I have met some very nice American Muslims, I have also been inside a mosque where I was looked at as if they wanted to take a scimitar to my neck.

If Moderate Muslims are not behind their radical brethren’s eternal jihad against us infidels, they need to get their mugs in front of the cable news networks’ TV cameras and say so…because all I see representing them when I turn on the news, are the abrasive members of CAIR, blaming America for all the world’s troubles.

Now, I am not saying that every Muslim is on a jihad against “the infidels”.

When Christians become “radicalized”, we want to share the testimony of what God has done for us through His love, with everyone we meet. We get involved in our local church and we become better fathers, mothers, sisters, brothers, and American Citizens.

When Muslims become “radicalized”, they want to “kill the Infidels” in the name of “Allah the Merciful”.

In the case of the Chechen Muslim brothers who bombed the Boston Marathon, their immersion into Radical Islam led them to “kill the infidels” that horrendous day.

In the case of the barbarians of ISIS, it has turned them into doppelgangers of the Nazi Butchers of Dachau.

Islam and Christianity present two very different Deities, who may share some similarities, but who have different identities and ultimately different standards. To pretend they are the same is not only to be clueless of the faith of 76% of the citizens of this nation, but, to be ignorant of an integral part of our American Heritage, the legacy of Christian Faith, which our Founding Fathers bequeathed us.

For Liberals to deny that, is disingenuous at best, and just plain out-and-out lying at worst.

The Father of our Country, our First President, George Washington, once delivered the following mighty words to a fledgling nation:

You do well to wish to learn our arts and ways of life, and above all, the religion of Jesus Christ. These will make you a greater and happier people than you are.

The blessing and protection of Heaven are at all times necessary but especially so in times of public distress and danger. The General hopes and trusts that every officer and man will endeavor to live and act as becomes a Christian soldier, defending the dearest rights and liberties of his country.

I now make it my earnest prayer that God would… most graciously be pleased to dispose us all to do justice, to love mercy, and to demean ourselves with that charity, humility, and pacific temper of the mind which were the characteristics of the Divine Author of our blessed religion.

Please notice that the words, “ACCEPT CHRIST AS YOUR SAVIOR OR DIE” were nowhere in this transcript.

2 thoughts on “The War Against Christianity: From Walmart to the Classroom”