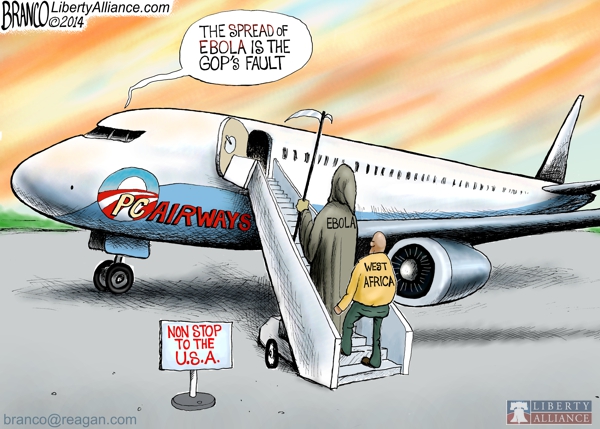 As the American Outbreak of the deadly plague known as Ebola continues to create fear and anxiety in the Land of the Free and the Home of the Brave, two smaller, less technologically-advanced nations have been seeing success in their efforts in containing the horrible disease.

According to the Associated Press...

Health officials battling the Ebola outbreak that has killed more than 4,500 people in West Africa have managed to limit its spread on the continent to five countries – and two of them appear to have snuffed out the disease.

The developments constitute a modest success in an otherwise bleak situation.

Senegal did so well in finding and isolating a man with Ebola who had slipped across the border from Guinea in August that the World Health Organization on Friday will declare the end of the disease in Senegal if no new cases surface.

Nigeria is another success story. It had 20 cases and eight deaths after the virus was brought by a Liberian-American who flew from Liberia to Lagos, Nigeria’s commercial capital of 21 million people, in July. Nearly 900 people were potentially exposed to the virus by the traveler, who died, and the disease could have wreaked havoc in Africa’s most populous nation.

Instead, Ebola appears to have been beaten, in large part through aggressive tracking of Ebola contacts, with no new cases since Aug. 31.

WHO, the U.N. health agency, called it “a piece of world-class epidemiological detective work.” The organization is set to declare an end to the outbreak in Nigeria on Monday.

On Wednesday, Senator Ted Cruz of Texas wrote the following Op Ed for the Texas Tribune, which exudes common sense…

The Ebola outbreak in West Africa presents an urgent public health threat to America. The loss of life and the growing epidemic are heartbreaking and tragic. And we need serious leadership in the United States to protect our citizens today.

To date, roughly 8,000 people have contracted Ebola in West Africa. The Centers for Disease Control estimates that under worst-case-scenario conditions, the number of Ebola cases could reach 1.4 million by January. Of those, over 50 percent would likely lose their lives.

We need to do everything we can to contain this outbreak, to help the people who are suffering in Africa and to prevent this epidemic from spreading. But our first priority must be to protect the health and safety of American citizens. The Constitution sets forth the federal government’s responsibility to “provide for the common defense.” That should be the president’s focus.

Already, one Liberian citizen, Thomas Eric Duncan, was able to fly on a commercial flight to Texas, arriving at the Dallas/Fort Worth International Airport infected with Ebola. Duncan lost his life, but not before transmitting the disease to a Dallas nurse, Nina Pham, who bravely put her life in jeopardy caring for him in his final days. Officials announced on Wednesday that another health care worker had been diagnosed with the virus. Our prayers are with that worker, Pham and Duncan’s grieving family.

We all very much hope the virus will not spread any further in Texas. But hope is not a strategy. Given the gravity of the threat, common sense dictates that it’s time to ban flights from the countries afflicted by Ebola.

The federal government has implemented screenings at five major American airports for passengers arriving from Liberia, Sierra Leone and Guinea. Notably, the screenings don’t include other airports like DFW, where Duncan arrived.

This is not enough. The screenings are not effective if the patient is not symptomatic, and the Ebola virus has an incubation period of up to 21 days. During that time, an Ebola carrier presents no symptoms and is not contagious. Anyone traveling during those 21 days will likely walk right through the screening.

Banning flights from the afflicted countries is a prudent, common-sense step until the epidemic is brought under control.

The Obama administration resists doing so, telling us that the U.S. health care system is much more advanced than Africa’s and is thus better able to contain an outbreak. That’s true, but an outbreak here could nonetheless be catastrophic.

We know that even with high-quality American health care, Duncan transmitted the virus to at least two workers. Despite the CDC protocols, the biohazard suits, nitrile gloves and goggles, the virus was still passed to Pham and her co-worker, although we don’t yet know how. But we do know simple human error, a tiny flaw in equipment or the potential of a mutating virus can render even the most cautious protocols ineffective.

I recently visited with the leadership of one of Texas’s largest health care systems about their precautions to counter Ebola. I asked how many Ebola patients they could reasonably handle with these protocols. “Six or so,” they responded. What if, God forbid, we saw 8,000, as in West Africa? They had no answer.

We shouldn’t risk finding out what that answer might be.

Yesterday, the incompetent leader of the Centers for Disease Control, Dr. Thomas Frieden, proclaimed that he was not in favor of quarantining the African Countries, which are the most fertile Ebola Incubators, because it would hurt the economy of those African Nations.

The economies of African Nations versus saving American lives. Let me think about this for a minute.

This President and his Administration have a different set of priorities than the citizens whom they are supposed to be protecting, and failing miserably to do so.

The economies of the African Nations, which MUST be quarantined, will eventually recover.

Americans killed by Ebola will not.