My Fellow Americans, is you don’t believe that we are in the middle of a war between “princes and principalities”, read this…

House Resolution 1233, introduced by Rep. Mike Johnson, R-La., called on the Biden administration to ”use all appropriate law enforcement authorities to uphold public safety and protect the rights of Pro-Life facilities, groups and churches.”

The resolution noted that “since the May 2, 2022 leak of the Supreme Court’s draft opinion in Dobbs v. Jackson Women’s Health Organization, individuals professing anti-life views have targeted, destroyed, or vandalized numerous pro-life facilities, groups, and even churches to further their radical cause.”

”Ever since the Dobbs decision, crisis pregnancy centers have been subjected to a nationwide spate of violence and vandalism, that has been met with silence from President Biden and Democrats,” Johnson tweeted. ”Enough is enough.”

Anti-abortion centers, Catholic churches and other organizations that oppose abortion have been targeted across the U.S. in the wake of the Supreme Court’s decision last month to overturn Roe v. Wade, which had established the right to an abortion nationwide.

According to the Catholic News Agency, 77 incidents of vandalism have been recorded.

Jane’s Revenge, an abortion rights group, has claimed responsibility for some of the attacks and in a letter published in June declared ”open season” on anti-abortion pregnancy centers.

Let me get this straight…

The followers of Molech calling themselves “Jane’s Revenge” believe that killing a human being inside their mother’s womb is a “basic human right”?

And, if you tell me that the life form growing inside a human mother is not a human, I will tell you that you have been watching the 1970’s Drive-In Movie “Humanoids From the Deep”, again.

The Far Left House Democrats and their minions (paid and unpaid) who stalk social media sharing their support for the extremist violence of “Jane’s Revenge” demonstrate the kind of callousness and unadulterated EVIL which deserves absolutely none of our tax dollars.

Have you ever tried to have a discussion with an ardent pro-abortion supporter, either on Facebook or face-to-face? You won’t hear these “Champions of Tolerance” call those innocent lives, babies, human beings, a life, a soul, a gift from God, or anything remotely resembling something that they should feel remorse about killing.

Heck, Pro-Abortionists are opposed to the taking of sonograms of the woman’s womb, before she has an abortion. They’re afraid that the “seed-carrier” will realize that IS a HUMAN BEING inside her and will decide not to kill that baby.

From the scientific perspective, Dr. Carlo Bellieni, in his book “Dawn of the I: Pain, Memory, Desire, Dream of the Fetus,” writes:

As soon as it is born, the child shows in a scientifically demonstrable way that it recognizes its mother’s voice and distinguishes it from that of a stranger. Where has he learned that voice other than in the maternal womb?

There are also direct proofs. For example, we register how the movements and cardiac frequency of the fetus vary if we transmit unexpected sounds through the uterine wall. And we see that at first the fetus is startled, then it gets used to it, just like we do when we hear something that does not interest us.

In fact, the scientific evidence is immense. We cannot understand how it can be thought that it becomes a person at a certain point, perhaps when coming out of the uterus.

From the physical point of view, at the birth very little really changes: Air enters the lungs, the arrival of blood from the placenta is interrupted, the type of circulation of blood in the heart changes, and not much more.

As I often say, only blind faith in magic arts or some strange divinity can lead one to think that there is a “human” quality leap at a given moment — certainly not science.

And, I have always said that, in what seems to be a majority of the cases, abortion is a selfish act. It ends the life of an innocent human being, before they even have had the chance to live it.

Life is not, and never will be, a bicycle ride in the park.

Life is a series of challenges, which every person has to meet head on, and make the choice between right and wrong for themselves.

I know that there are some of you that read my blog that are non-believers.  For you and for my Christian brothers and sisters, I offer the following closing thoughts:

There is a curious unique enzyme found in the human body.   Laminin is defined by the Webster Medical Dictionary as a “glycoprotein that is a component of connective tissue basement membrane and that promotes cell adhesion.”  In other words, a glue within the body. 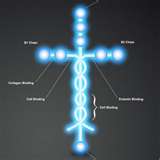 We have been given Free Will by Our Creator because WE ARE LOVED.

In fact, He loves us so much, that He gave us that still small voice, which resides in each one of us, which is referred to in secular terms as the conscience and is known to Christians as the Holy Spirit.

It is this still small voice which helps us make the important decisions which we face in this life, in order to overcome the challenges that we are faced with.

It’s also undoubtedly why the overwhelming majority of Americans were revulsed and horrified by the ghoulish resurrection of the practices of and imitation of the Third Reich by Planned Parenthood through their monstrous marketing of the body parts of aborted babies.

Regardless of what you see in the Main Stream Media, the majority of Americans still know the difference between right and wrong.

Which explains why Biden’s Popularity is down to 29% and the Democrats are facing a Political Tsunami in this November’s Midterm Elections.