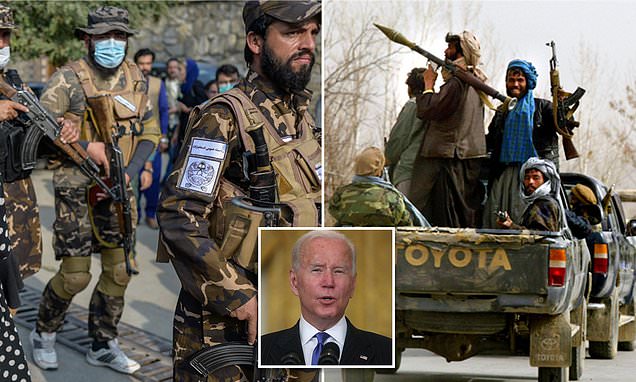 “These aren’t the interpreters that we took. These were people that rushed into the planes, and they were so interested in trying to make it sound like ‘Oh, they’re doing a good job.’ These people, many of these people are going to be terrorists. Okay? They’re going to be terrorists. They were very powerful. They were very energetic in getting onto the aircraft.” – Former President Donald J. Trump

In an Exclusive, FoxNews.com reports that

The Biden administration is planning to allow some Afghan civil servants who were employed by the 1996-2001 Taliban government to be exempt from terror-related bans on entering the United States, according to a draft document obtained by Fox News. The administration continues to bring in tens of thousands of Afghans as part of the U.S. withdrawal from Afghanistan.

The draft U.S. Citizenship and Immigration Services (USCIS) planning document, reviewed by Fox News, outlines how the Department of Homeland Security is planning on issuing a memorandum to allow Afghan civil servants who worked during the Taliban regime to be exempted from terrorism-related inadmissibility grounds (TRIG) if they fulfill other background and screening requirements.

TRIG places limits on individuals who are members of a terrorist organization or who have engaged in terrorism, making them inadmissible to the U.S. and ineligible for immigration benefits. The USCIS website says that the definition of terrorism-related activity “is relatively broad and may apply to individuals and activities not commonly thought to be associated with terrorism.” It means that TRIG would likely rule out those who worked under the Taliban regime, which ruled from 1996 until its ouster by the U.S. in 2001 due to its harboring of al Qaeda after the 9/11 attacks.

“Many individuals who worked in civil service positions before the declaration of the Islamic Emirate of Afghanistan in 1996 continued to do so after the declaration,” the document says in justification of the application. “Some did so under duress or other situations of hardship.”

“Some used their positions in humanitarian capacities to mitigate the repressive actions of the Taliban regime, often at great personal risk. Some of these civil servants later worked for or helped the International Security Assistance Force, the U.S. government or the Afghan government that was established in Dec. 22, 2001,” it adds.

The Taliban has regained control of Afghanistan in the wake of the U.S. withdrawal, and the Biden administration has been bringing tens of thousands of Afghans into the U.S., including those who helped the U.S. mission and those deemed “at risk.” The administration has estimated it will bring in approximately 95,000 Afghans during this fiscal year.

The TRIG exemption authority for Afghan civil servants was finalized in the final days of the Obama administration in January 2017, but it was never published or applied to any refugees, the document says. USCIS says the guidance is being applied now as it anticipates increased filings from Afghan nationals. The authority allows USCIS officers to exempt terror-related inadmissibility grounds that result from employment by the Taliban as civil servants between Sept. 1996 and Dec. 2001.

An administration official emphasized to Fox News that the memo would not change the screening and vetting process in existence and that each individual would still be screened, evaluated and cleared by law enforcement and counterterrorism officials before being admitted into the U.S. The official also said that similar exemptions have been made with refugees from countries like the Soviet Union and Cuba, and that, without an exemption, Afghans who worked as teachers or in health care could be excluded from entering the U.S.

Considering that the Department of Justice under AG Merrick Garland is nothing but a Political Tool used by the Biden Administration and the Democrat Elite to intimidate average Americans, I am not getting the “Warm Fuzzies” from their reassurance that they will vet these former members of the Taliban Regime of Afghanistan.

Here’s a Million Drachma Question for ya: Why are the other Middle Eastern Countries not taking them in?

What do they know that The Biden Administration doesn’t?

I can answer those questions in two little words: “hijrah” and “taqujiyya”.

“Hijrah” refers to the undertaking of a pilgrimage to spread Islam to the World, such as undertaken by Mohammed between Mecca and Medina in 612 A.D., which is referred to as “The Start of the Muslim Era”.

“Taquiyya” is the Muslim Practice of purposeful lying to us “Infidels” in order to further the cause of Islam.

This situation, that Europe is still dealing with, and that we will be facing, with a possible Invasion Force, disguised as “Refugees”, can be traced back to Obama’s premature evacuation of Iraq.

It is no secret that Barack Hussein Obama is a vain and petulant man. It is also no secret that he was a Far Left Radical in his collegiate days and his early political career, only moving to the middle of the political spectrum while he was campaigning for the presidency.

Obama’s defense for America admitting undocumented and un-vetted Syrian “Refugees”, who, literally, as documented, tore apart Europe, is the scolding comment, which he and his Former Vice-President make time and time again,

That’s not who we are.

Americans have been aware, since before the nightmarish 8 years of the Obama Presidency, that there is a great disconnect between the citizens of the United States and the Far Left Democratic Party and everything that they represent.

For example, Barack Hussein Obama was not raised like the majority of Americans.

He didn’t have rubber dart gun wars in the neighborhood backyards. He didn’t play Nerf football in the front yards. He didn’t go to Vacation Bible School. I don’t know if he was ever told to stand with his hand over his heart during the Pledge of Allegiance.

And, his Former Vice-President, the author of our current nightmare, Installed President #DementiaJoe Biden, is nothing but a puppet at the hands of his Far Left Masters, probably including Barack Hussein Obama.

It is this disconnect that is at the heart of the distrust that Americans have experienced and are experiencing, regarding these incoming refugees, entering our Sovereign Nation with their child brides.

Obama has never understood the shared values of average Americans, because the people who raised him did not share those values, either. It is the concern that we feel for one another, that shared American value system, that caused the great awakening which led to the election of President Donald J. Trump..

Allow me to tell you who “we”, the average Americans, who have been watching you tear OUR country apart for the last 9 months, are, Sleepy Joe.

We are the people who defeated that same tyrant and began a nation that, despite growing pains, and a war which pitted brother against brother, became the Greatest Nation on the Face of God’s Green Earth.

We are that small band of Tennessee Volunteers, who, with Davy Crockett at the Alamo, though hopelessly outnumbered, gave their lives in defense of freedom.

We are the sons and grandsons of those brave men who landed on Normandy Beach, turning the tide of World War II.

We are the people who are the most charitable people on Earth, contributing millions upon millions of our hard-earned money to private and faith-based charities, and, who personally help our family friends, and neighbors out, when disaster strikes…OUT OF THE GOODNESS OF OUR HEARTS, NOT PRESIDENTIAL DECREE.
.
We have taken in millions of immigrants, who came here legally, to start a new life in this blessed land, eager to assimilate into the American Way of Life, where, by God’s Grace…and hard work, they too could achieve the American Dream.

And, we are a nation, comprised of a population, of whom 75% STILL identify themselves as CHRISTIANS.
My father led me to Christ. He landed on Normandy Beach, on D-Day, as a Master Sergeant of an Army Engineering Unit. He was the finest man I have ever known.

To every thing there is a season, and a time to every purpose under the heaven: – Ecclesiastes 3:1

Regarding the so-called “Refugees”, the overwhelming majority of which are military-looking ultra-fit men with cell phones,…

I am sick of how Liberals, like Biden, all of the sudden have such an interest in the Bible and what Christ has to say in a feeble attempt at trying to use the faith of three quarters of Americans to prove their political point.

Hey Liberals, when you’re yanking a baby’s head out from their mothers womb with a pair of tongs, do you give a rat’s butt about the God of Abraham and the tenets of Christianity, then?

Wherefore by their fruits ye shall know them. – Matthew 7:20

America is a Nation of Laws, a Constitutional Republic forged from the sacrifices of men and women who loved Liberty and American Freedom more than life itself.

That’s who WE are, President Biden.

If once you forfeit the confidence of your fellow-citizens, you can never regain their respect and esteem.

That is the situation that you find yourself in today, Mr. President.

Judging by your past actions during these last 9 months, including the clandestine dissemination of the “youths” from Central and South America, who have arrived here, parentless, across our open Southern Border, throughout our country, we “average Americans”, do not trust you and your people, when you say that you will “vet” these “Refugees”.

Especially, since the overwhelming majority of them are well-fit young men with cell phones, who look like soldiers.

And, that is why we are not very happy with your plans to disseminate these “Refugees” among us.

And, you wonder why the majority of Americans no longer trust you to perform your duties as President?
It’s a matter of SURVIVAL.

Please step down as President TODAY.