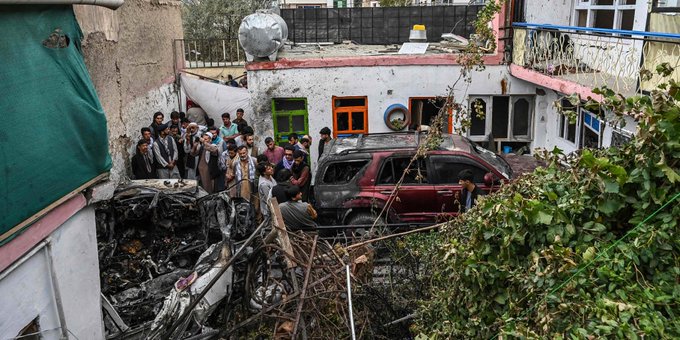 This Wag The Dog strike turned out to have a terrible innocent body count https://t.co/SbV54CAMQ7

Head of the United States Central Command Gen. Kenneth F. McKenzie Jr. announced Friday that it is unlikely any ISIS-K members were killed in a Kabul drone strike on August 29, which led to multiple civilian casualties.

“We now assess that it is unlikely that the vehicle and those who died were associated with ISIS-K or a direct threat to US forces,” McKenzie said of the airstrike at a briefing, following an investigation by the Military.

“This strike was taken in the earnest belief that it would prevent an imminent threat to our forces and the evacuees at the airport, but it was a mistake and I offer my sincere apology,” Mckenzie said, adding that he is “fully responsible for this strike and this tragic outcome.”

The drone strike, which was intended to target ISIS-K operatives, resulted in the deaths of an aid worker and up to nine of his family members, including seven children. According to U.S. officials, the strike on the vehicle, formerly believed to have been a threat that included bombs and that was operated by ISIS-K militants, took place after a suicide bombing at Kabul airport in Afghanistan killed 13 U.S. service members and civilians.

“On behalf of the men and women of the Department of Defense, I offer my deepest condolences to surviving family members of those who were killed, including Mr. Ahmadi, and to the staff of Nutrition and Education International, Mr. Ahmadi’s employer,” Secretary of Defense Lloyd J. Austin III said in a lengthy statement on the investigation’s findings. “We now know that there was no connection between Mr. Ahmadi and ISIS-Khorasan, that his activities on that day were completely harmless and not at all related to the imminent threat we believed we faced, and that Mr. Ahmadi was just as innocent a victim as were the others tragically killed.

“We apologize, and we will endeavor to learn from this horrible mistake,” Austin added, saying that officials “will scrutinize not only what we decided to do — and not do — on the 29th of August, but also how we investigated those outcomes.”

“We owe that to the victims and their loved ones, to the American people and to ourselves,” Austin said.

The drone strike, as classified by Mckenzie as a “tragic mistake,” was previously hailed as a “righteous strike” by Gen. Mark Milley, Chairman of the Joint Chiefs of Staff.

“In a dynamic high threat environment, the commanders on the ground had appropriate authority and had reasonable certainty that the target was valid but after deeper post strike analysis our conclusion is that innocent civilians were killed,” Milley said Friday. “This is a horrible tragedy of war and it’s heart-wrenching and we are committed to being fully transparent about this incident.”

White House Press Secretary Jen Psaki also described the strike as a success of new “over the horizon” capabilities in late August.

“What we’ve seen over the past week is that our over the horizon capacity can work and has worked in going after ISIS targets and killing people who went after our troops,” Psaki said at the time. “So that’s where our resources and our focus is going to be on at this point in time.”

Let me get this straight.

They killed someone whom they believed was an “ISIS-K Planner who MAY have been carrying out future attacks against Americans and Afghanis and the Biden Administration at the time was not even sure that they killed the barbarian responsible for killing 13 of America’s Best and Brightest and 90 Afghanis.

Well, they were right for once.

Why did they not get the appropriate information together before beginning the operation?

Since this WASN’T the mastermind of that attack, we will probably be hit with an even bigger attack in the near future.

Don’t forget, we left billions upon billions work of American military weapons, including helicopters behind., which Russia and China are, even now, reverse engineering so that they can have their own Apache Helicopters.

Who are the members our Military Intelligence Brain Trust?

I was going to say that this is unbelievable…except for what we as a country have witnessed so far in this deadly fiasco that is Biden’s tenure as President…so far.

With all of the blowback that Biden has received already on the Afghanistan pull-out, his Handlers probably told his Woke Military Leaders that some sort of retaliation had to be put together FAST before the movement in the House to impeach him gathered stream and Americans started protesting for his ouster in front of the White House.

So, evidently they decided that a Drone Strike was in order, in keeping with Biden’s bragging about “Over the Horizon” military Operations.

The only problem with remote control war is the fact that it only works if you hit the right target.