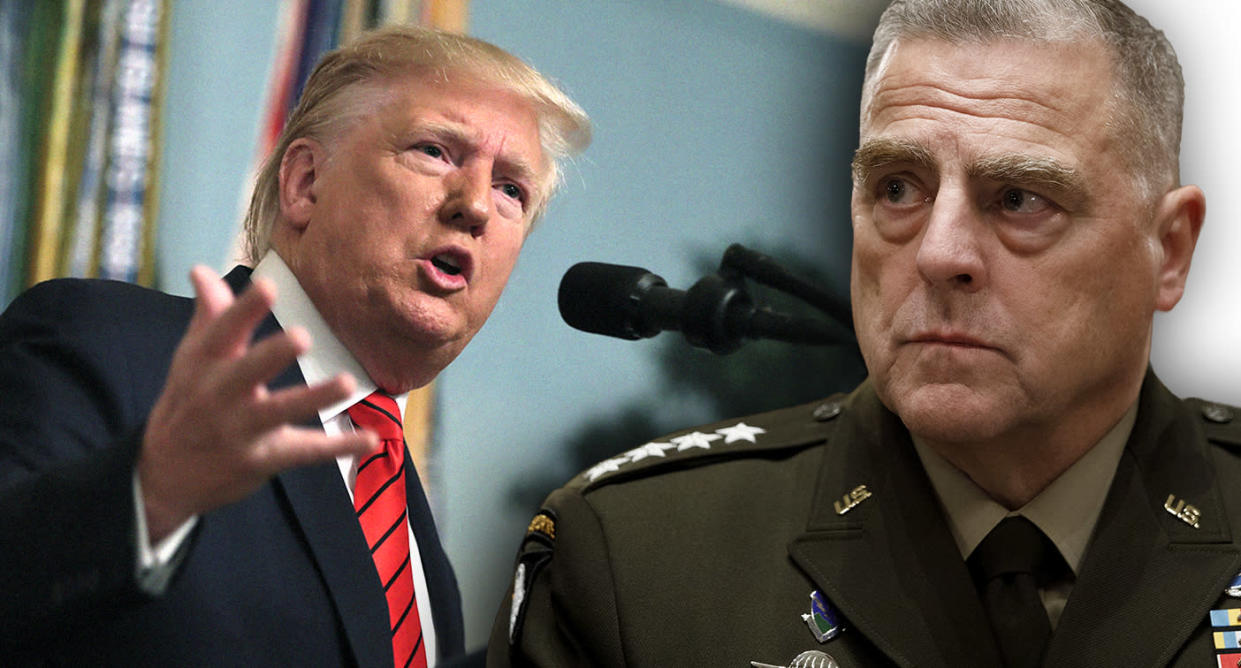 Among other things, Milley also broke the Logan Act

Former President Donald Trump on Tuesday expressed skepticism regarding the report that Chairman of the Joint Chiefs of Staff Gen. Mark Milley went behind his back to call Chinese officials but said such an action was treasonous if true.

Milley reportedly made the calls before the 2020 presidential election on Oct. 30, 2020, and two days after the Jan. 6 Capitol riot, on Jan. 8, 2021, and assured Zuocheng of the stability of the American government. He also allegedly assured the Chinese general that he would contact him regarding any imminent attack from the U.S. in the waning days of Trump’s presidency.

“So, first of all, if it is actually true, which is hard to believe, that he would have called China and done these things and was willing to advise them of an attack or in advance of an attack, that’s treason,” Trump told host Sean Spicer on NewsmaxTV’s “Spicer & Co.”

“I’ve had so many calls today saying that’s treason, number one,” Trump continued. Acknowledging he was tough on China regarding trade and COVID-19, he went on to describe the idea that would unilaterally attack China as “totally ridiculous.”

In a statement released shortly after his interview on Newsmax, Trump called on Milley to step aside, floating a theory that Milley came up with the story himself and leaked it to Woodward and Costa, whom he described as journalists “who write fiction, not fact.”

“For the record, I never even thought of attacking China—and China knows that. The people that fabricated the story are sick and demented, and the people who print it are just as bad. In fact, I’m the only President in decades who didn’t get the U.S. into a war—a well known fact that is seldom reported,” Trump added.

One of the reasons that some of the G.O.P. Establishment did not like him was the fact that he was not a War Hawk Like, say, Liz Cheney.

But wait…there’s more to this “Milley Mess” per CNBC.com…

House Speaker Nancy Pelosi told the top U.S. Army general that then-President Donald Trump was a “dictator” who “should have been arrested on the spot” after what she called his coup attempt to remain in the White House by inciting the Jan. 6 Capitol insurrection, a new book reveals.

Pelosi also said during a phone call in January with Joint Chiefs of Staff Chairman Gen. Mike Milley that “the Republicans have blood on their hands” for enabling Trump’s delusions about his ability to retain the presidency, the book says.

“But it is a sad state of affairs for our country that we’ve been taken over by a dictator who used force against another branch of government,” Pelosi, a California Democrat, told Milley during the call several days after the riot, according to “Peril,” a new book by Washington Post journalists Bob Woodward and Robert Costa.

“He had a coup d’etat against us so he can stay in office. There should be some way to remove him,” said the speaker, who at the time was trying to pursue the suspension of Trump’s power as president by getting then-Vice President Mike Pence and the Trump Cabinet to trigger the constitution’s 25th Amendment.

The book says Milley believed that the Jan. 6 riot by Trump supporters was a planned, coordinated attack that was designed to overthrow the U.S. government to prevent Congress from confirming the election of Joe Biden as president.

…The book says that Milley feared that even after the insurrection, Trump might still seek what the general called a “Reichstag moment,” a reference to Nazi leader Adolf Hitler assuming full power in Germany after the burning of that nation’s Parliament building in 1933.

The Democrat Elite are insane.

Their Trump Derangement Syndrome had raged out-of-control for four year, turning them into a party of Captain Ahabs, looking to harpoon the Great White Whale, while deathly afraid of him at the same time.

If what is in “Peril” is true, Milley committed treason and sedition against a sitting Commander-in-Chief and not only needs to resign, he should be brought up on charges.

Even if it is true, the Democrat Elite will arrange for him to get away with it.

As we are witnessing with the wearing of masks, when it comes to the law and the Constitution, rules only apply to us “common” people.

Time and time again, Democrats have gotten away with things that you and I would have been put under the jail for.

The Anti-American Nightmare known as the Biden Presidency just keeps getting worse and worse with each passing day, doesn’t it?

I am afraid to ask “What’s Next?” because it will probably involve #DementiaJoe mistaking the launch button on the Nuclear Football for his intercom to ask the White House Kitchen Staff to bring him some ice cream.

Both General Milley and Secretary of State Tony Blinken need to resign.

Both are arrogant, clueless, and incompetent.

And, that is a combination which will hurt the safety and reputation of our country more than it will help it.