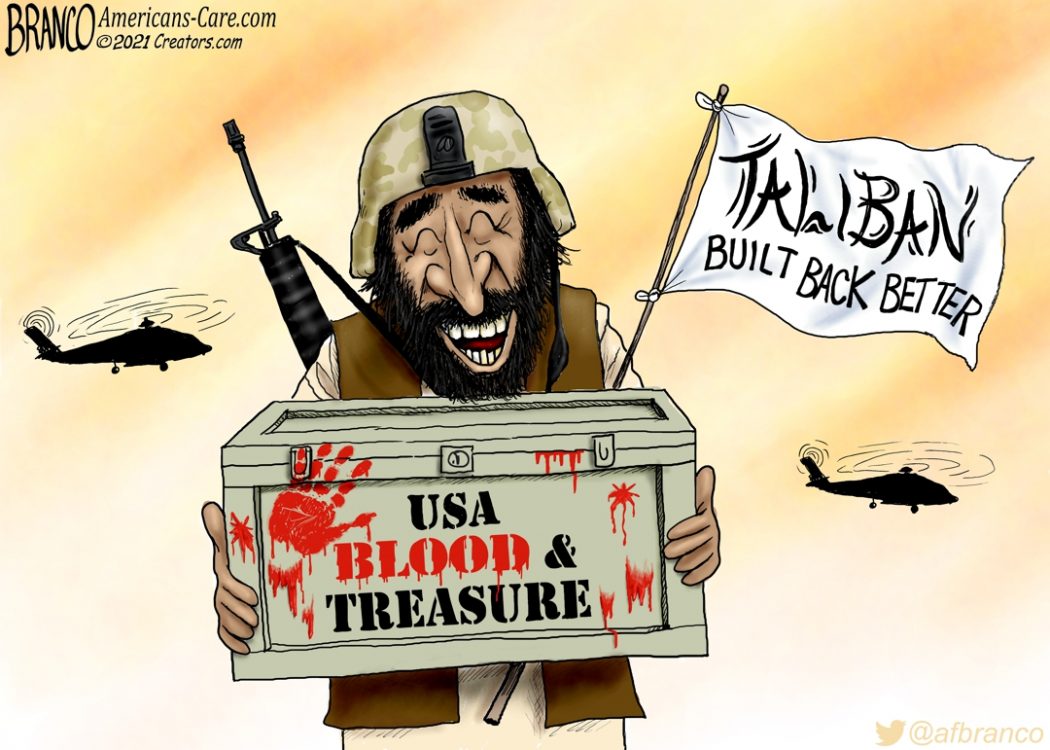 Former President Donald Trump blasted the Biden administration’s withdrawal from Afghanistan and speculated that China and Russia could already be reverse-engineering U.S. military equipment left behind.

Speaking with host Sharyl Attkisson during an interview that aired Sunday on “Full Measure,” Trump excoriated the withdrawal as “incompetent” and warned it will likely endanger the United States and benefit its enemies.

Trump also expressed doubt regarding whether the war in Afghanistan is over, noting how many unvetted Afghan refugees are being resettled in the United States and around the world.

“I don’t know because you have people going all over the world and being dropped all over the world right now, and nobody knows who the hell they are, Sharyl,” Trump said. “These aren’t the interpreters that we took. These were people that rushed into the planes, and they were so interested in trying to make it sound like ‘Oh, they’re doing a good job.’ These people, many of these people are going to be terrorists. Okay? They’re going to be terrorists. They were very powerful. They were very energetic in getting onto the aircraft.”

Trump went on to suggest the nation’s adversaries are already taking advantage of the stockpile of weapons, armored vehicles, and aircraft that left U.S. forces left behind.

“Now I’m saying, ‘How can they take this equipment?’ And I guarantee that China and Russia already have our Apache helicopters and they’re taking them apart to find out exactly how they’re made. They’re the best in the world by far. And they’re taking them apart so they can make the exact same equipment. They’re very good at that. It’s a disgrace.”

The U.S. offered approximately $83 billion worth of training and equipment to Afghan security forces since 2001.

The military left behind 73 aircraft in Afghanistan, some of which were disabled, according to USA Today. Pentagon officials said that soldiers operated Apache attack helicopters at the airport. Afghan pilots reportedly flew some of the advanced aircraft to foreign countries and abandoned much of the rest.

The fact that Biden botched the pull-out from Afghanistan, leaving hundred of Americans and billions of dollars in American Weaponry behind is not up for argument.

It is factual history detailing the actions of an incompetent United States President who was installed and not elected.

But, why would Biden leave State-of-the-art American Weaponry behind to be examined and restored by Russia and China?

FoxNews.com reported on October 16th of last year that

One of the people on an explosive email thread allegedly involving Hunter Biden has corroborated the veracity of the messages, which appear to outline a payout for former Vice President Joe Biden as part of a deal with a Chinese energy firm.

One email, dated May 13, 2017, and obtained by Fox News, includes a discussion of “remuneration packages” for six people in a business deal with a Chinese energy firm. The email appeared to identify Hunter Biden as “Chair / Vice Chair depending on agreement with CEFC,” in an apparent reference to now-bankrupt CEFC China Energy Co.

The email includes a note that “Hunter has some office expectations he will elaborate.” A proposed equity split references “20” for “H” and “10 held by H for the big guy?” with no further details. Fox News spoke to one of the people who was copied on the email, who confirmed its authenticity.

Sources told Fox News that “the big guy” is a reference to the former vice president. The New York Post initially published the emails and other controversial messages that Fox News has also obtained.

Hunter Biden was the point of the spear in a Foreign Policy scandal which is just a small part of what will go down as the most corrupt Presidential Administration in history, making the Warren G. Harding Teapot Dome Scandal pale in comparison.

All of this boggles the mind. Think about it:

The trading of Muslim Terrorists for the traitorous Bowe Bergdahl

And, of course “Spygate”, the Steele Dossier, and the unmasking of Gen. Flynn

The entire attack on Former President Trump, which lasted his entire first term, the Special Counsel’s “Russian Collusion” investigation, and the hurried Democratic Sham Impeachment were all part of a strategy to cover up the out-of-control corruption, both foreign and domestic, which took place during the Obama Administration with the knowledge and consent of President Barack Hussein Obama, himself.

That would certainly explain the Democrats’ over-the-top reaction to losing the 2016 Presidential Election and their vicious rhetoric and unconstitutional political actions and schemes since.

And, the Biden Administration’s fervent desire to forget about what just happened in Afghanistan.

Former President Trump was right all along.

Just let this soak in, boys and girls…

We have a President of the United States of America who is owned by Communist China!!!

If the dots can be connected in the case of Hunter Biden’s and his father’s history of corruption and the Obama White House and their Foreign Policy, it could be absolutely huge.

If our Sovereign Nation is to survive, this out-of-control political corruption, perpetrated on behalf of a Shadow Government by Deep State Operatives, must be dealt with and those responsible brought to justice.

No matter to whom the trail of corruption leads.

So, to ask an important question again, in closing…

Why would Biden leave State-of-the-art American Weaponry behind to be examined and restored by Russia and China? enemies?

By the way, where IS Hunter Biden?

Until He Comes,
KJ