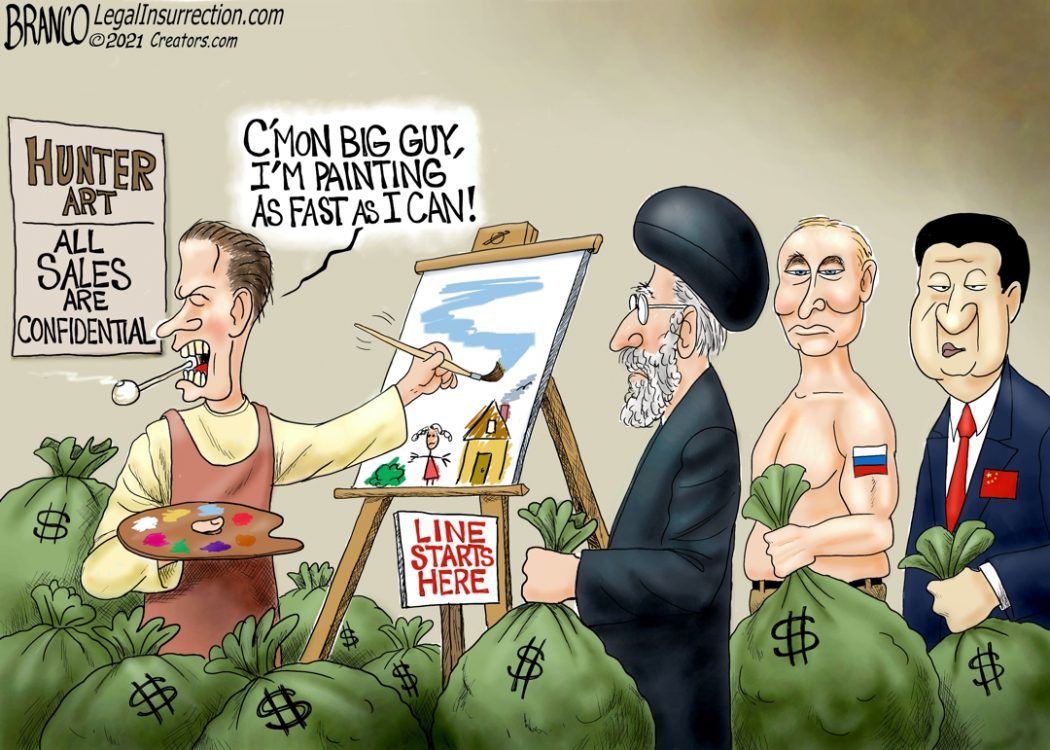 The White House's tortured case that Hunter Biden can talk to prospective art buyers, never discuss sales, leave it to the gallery to protect everyone's ethics, collect the money, and nobody will ever know who did what. From today's WH briefing: pic.twitter.com/RtxM6xYxmg

The White House, on the defensive, on Friday offered assurances that necessary ethical precautions would be taken around any exhibitions and sale of artwork by President Joe Biden’s son, whose personal life and professional career have been peppered with controversy.

But, she was quick to add, discussions about sales “will be happening with the gallerist” and not Hunter Biden, she said. “That is different than meeting with prospective buyers,” a circumstance that was reported to be the case on Thursday.

Psaki had announced July 9 that a system had been established allowing Hunter Biden to practice his profession “within appropriate safeguards,” including the confidentiality of any transactions and no contact with buyers.

At exhibits of Hunter’s work, “the selling of his art will all happen through the gallerist and the names and individuals will be kept confidential,” she said.

When pressed that a buyer could simply tell the artist that he or she is purchasing his work, Psaki stressed that a strict rules structure will be in place.

Contacted by AFP, the gallery did not immediately provide any comment or details.

The Biden administration, which seeks to present itself as ethically unblemished, has been repeatedly questioned about the artistic career of the 51-year-old lawyer and businessman-turned-painter, who has previously been accused of trying to peddle access to his dad when the senior Biden was vice president under the Obama administration.

U.S. media point out the obvious risks of businessmen or others purchasing the artwork with the sole aim of winning access to or influence with the White House.

Press reports have said the paintings by Biden, who has had no formal training, could sell for up to half a million dollars.

During the 2020 presidential campaign Trump and his supporters regularly criticized Hunter Biden for his economic interests in Ukraine and China when his father was vice president under Barack Obama.

Hunter is also the target of a federal investigation into possible tax crimes.

In a memoir published earlier this year, the president’s youngest son recounted his struggle with addiction to cocaine and alcohol.

Boys and girls, if you believe that Hunger and “The Big Guy” will not know who is buying his artwork, then I have two bridges over the Mississippi River at Memphis to sell you.

I am sure that his artistic talent positively flows when he’s “nekkid” and stoned out of his mind (what’s left of it).

Just how shifty is this “new career” for Hunter to make the Former “Ethics Czar” for Obama (which is a contradiction of terms) to have called the Biden White House out on it?

But then again, what should we expect from the most crooked Presidential Administration since the Clinton  “Co-Presidency”?

So, boys and girls, wrap your heads around this:

Joe and Hunter Biden are guilty of the very thing that President Donald J. Trump was investigated for by a Special Counsel, his minions, and Nancy Pelosi and the Democrats in the House of Representatives: COLLUSION!

Joe Biden has been lying to Americans concerning his involvement with his son’s nefarious foreign deals, which makes him a security risk to our Sovereign Nation.

Biden should never have been able to run for President of the United States of America.

To say that Sleepy Joe is compromised is putting it mildly.

He and his heathen son are both as crooked as a dog’s hind leg.

Another thing…Special Counsel Robert Mueller was chosen in May of 2017.

His investigation was underway while the Biden Crime Family was brokering deals for personal gain with our two biggest enemies.

Given the fact that this Father and Son enterprise had been in “business” since Biden was Vice-President, and that several prominent Democrats were on lists to be contacted by the Bidens about certain endeavors, it sheds a whole new light on the sham impeachment of President Trump.

Were the Democrats attempting to cover their own dealings with the Biden Crime Family?

Joe Biden is the not only the worst President in Modern History…he is the most dangerous.

…are those who have already paid him, his son, AND his for “services rendered”.

Calling the Democrat Elite a bunch of hypocrites does not even begin to cover the depth of their corruption.