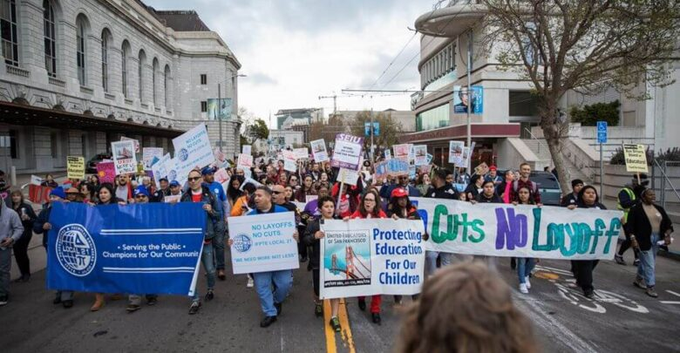 Throughout his life, Elie Wiesel gave voice to those who had been silenced forever. He fought vigorously against antisemitism and to fulfill the promise of Never Again for all future victims of genocide.

The United Educators of San Francisco’s endorsement of the movement in mid-May during the recent fighting between Israel and Hamas is reportedly the first time a public school teachers union has backed that cause, according to the San Francisco Chronicle. The BDS movement seeks to pressure Israel to change its policies toward Palestinians.

“As public school educators in the United States of America, we have a special responsibility to stand in solidarity with the Palestinian people because of the 3.8 billion dollars annually that the U.S. government gives to Israel, thus directly using our tax dollars to fund apartheid and war crimes,” the union said in a resolution that it passed. “Therefore, be it resolved, that United Educators of San Francisco (UESF) express our solidarity with the Palestinian people and call for Israel to end bombardment of Gaza and stop displacement at Sheikh Jarrah.”

The union also called on President Biden to stop sending aid to Israel and that it “endorse[s] the international campaign for boycotts, divestment, and sanctions against apartheid in Israel.”

However, parents of students in the district are wondering why the 6,000-member union is getting involved in international politics during the coronavirus pandemic. Public schools in San Francisco only started welcoming children back to classrooms in April.

“The teachers union has failed in its most basic mission this year, opening schools and educating San Francisco’s children,” Todd David, a Jewish parent, told the San Francisco Chronicle. “Instead of focusing on that, they are weighing in on an international political land dispute that experts have been unable to resolve for 70 years.”

Parent Arik Luck – a member of the local Congregation Emanu-El — also told the newspaper that he feels the union has betrayed him as their statement “singled out Israel” and “did not even mention Hamas, an organization that is classified by our government as a terrorist group with a well-documented history of executing their political rivals and homosexuals.”

“I also question what my teachers union is doing wading into these waters at the expense of my kids,” he added. “There are many Jewish people in this city, public school parents who feel the way I do, and a statement like this causes us to worry for the safety of our children in school.”

The San Francisco Unified School District has not yet responded to a request for comment Friday from Fox News.

Union spokesperson Amanda Hart told the San Francisco Chronicle this week that “we stand by our call for the boycott, divestment and sanctions of Israel and we unequivocally stand against antisemitism in all its forms.”

The BDS effort officially traces its origins to a 2005 call by a coalition of 170 Palestinian organizations, though some observers see its roots in the Arab League boycott of Israel launched in the 1940s. The contemporary BDS movement began to take shape during the Second Intifada, which began in 2000. Escalating violence and various major Israeli military operations in the West Bank led to a number of boycott calls beginning in 2002. The construction of Israel’s West Bank barrier, which the Palestinians largely opposed, alleging that it was a land grab rather than an effort to reduce terrorism, gave further momentum to these efforts. The 2005 BDS declaration opens by noting that Israel’s construction of the barrier was continuing despite an International Court of Justice ruling a year earlier that it was illegal.

Do any Jewish organizations support BDS?

Very few, and none of the major ones. The best-known is Jewish Voice for Peace, a San Francisco-based group that does not endorse a two-state solution or the principles of Zionism and which the Anti-Defamation League lists among the top anti-Israel groups in the United States. Among mainstream Jewish organizations, there is wall-to-wall rejection of BDS. The Jewish campus group Hillel officially bars pro-BDS groups from speaking under its auspices, though this policy has been challenged at a number of schools. J Street, the liberal lobbying group, rejects BDS because the BDS movement does not support a two-state solution or recognize the Jewish right to a state. J Street does support boycotts that are targeted at Jewish settlements in Israeli-occupied territory, however.

So, the largest Jewish Group who supports the BDS Movement happens to be in San Francisco.

Boys and girls, are any of you actually surprised that a Liberal Teachers’ Union in Ultra-Liberal San Francisco are taking the side of a “movement” which The Squad champions because it speaks for the wishes of a bunch of Islamic barbarians (yeah, I said it) who want to take land away from Israel for a “country” with never existed?

The term “Palestine” (Falastin in Arabic) was an ancient name for the general geographic region that is more or less today’s Israel. The name derives from the Philistines, who originated from the eastern Mediterranean, and invaded the region in the 11th and 12th centuries B.C. The Philistines were apparently either from Greece, Crete, the Aegean Islands, and/or Ionia. They seem to be related to the Bronze Age Greeks, and they spoke a language akin to Mycenaean Greek. Their descendents, still living on the shores of the Mediterranean, greeted Roman invaders a thousand years later. The Romans corrupted the name to “Palestina,” and the area under the sovereignty of their city-states became known as “Philistia.” Six-hundred years later, the Arab invaders called the region “Falastin.”

Throughout subsequent history, the name remained only a vague geographical entity. There was never a nation of “Palestine,” never a people known as the “Palestinians,” nor any notion of “historic Palestine.” The region never enjoyed any sovereign autonomy, remaining instead under successive foreign sovereign domains from the Umayyads and Abbasids to the Fatimids, Ottomans, and British.

Why don’t the United Educators of San Francisco shut up, open back up their schools and classrooms, and teach?

Wouldn’t that be refreshing?

Or, would that be too much like work for them?