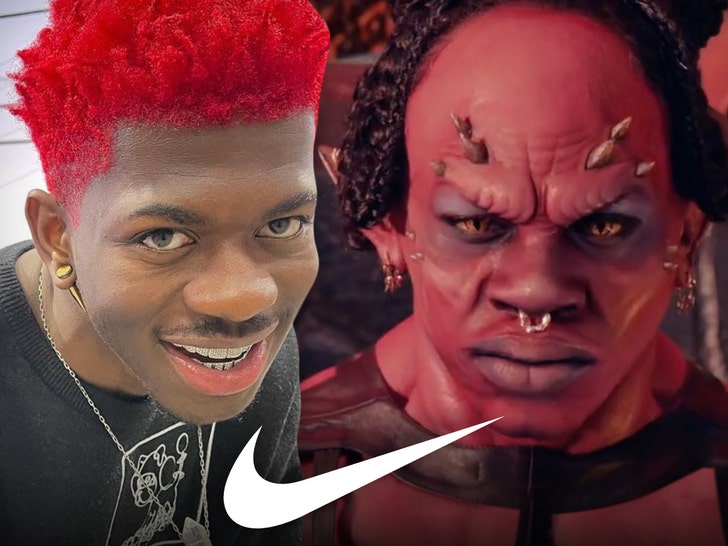 Woe to those who call evil good and good evil, who put darkness for light and light for darkness, who put bitter for sweet and sweet for bitter! – Isaiah 5:20

Lil Nas X is fully leaning into his new hellish aesthetic — teaming up with an idea org to release “Satan Shoes” … this on the heels of his polarizing music video on the same subject.

The rapper/pop star is putting out a limited release of Nike sneakers that are all about the Prince of Darkness and his kingdom … right down to the box artwork and even the shoe design itself, which features a pentagram emblem sitting on the laces.

The shoe body is a Nike Air Max ’97, which MSCHF — the company behind this campaign — has reinvented with Nas X’s new ‘Montero’ song and video in mind. It’s got a bible scripture emblazoned on the side, Luke 10:18, which references Satan’s banishment from heaven.

There’s also a 666 reference toward the back of the shoe … with another number in front of it, alluding to which limited unit it is. Word is, MSCHF/Nike are only dishing out 666 of these puppies to the public … so if you have 6/666, that seems to mean you got the 6th model.

Here’s the kicker … apparently, these shoes will contain one drop of human blood somewhere along the soles. And no, not the metaphorical blood, sweat and tears of the factory workers who will presumably put these together … like, actual plasma-filled red stuff.

Unclear whose blood exactly is being used for this … but it’s provocative, without a doubt.

Of course, the collab follows Nas X dropping a visual project for his track ‘Montero (Call Me By Your Name)’ … which got a lot of mixed reactions this past week.

Seems LNX is embracing the famed Jordan “f*** them kids” mantra. He’s all in on H-E-double hockey sticks. The shoes will retail for over $1,000, and hit the market March 29.

For those of you who do not remember or even know who Lil Nas X is, if you have children or grandchildren you have probably heard his biggest contribution to American Pop Culture so far, a mishmash of rap and country music, a collaboration with Billy Ray Cyrus, which became a smash hit back in 2019,

For whatever reason, American kids fell in love with it.

And now, this idol of American youth has decided to glorify the very embodiment of evil: Satan himself.

Is all this upheaval which average American Families are attempting to shield their children from with no help from  rhe Biden-Harris Administration, “Antifa”, “The Far Left”, or whatever you want to call the Anti-American immature idiots, due to some sort of Satanic Influence attempting to tip the scales in the fight between Good and Evil, across our land?

If you look at 80% of the movies that Tinsel Town produces for public consumption nowadays, they seek to glorify the Powers of Darkness….and they seem to be very popular with young Americans.

Why is the Occult, including Satan and his demons, so fascinating to impressionable young Americans?

People who take the existence of Satan lightly, eventually wind up in some sort of trouble, and those who worship Satan wind up in even greater trouble.

Back in the 1960s, the late, beautiful actress Jayne Mansfield posed for a series of publicity pictures with the Head Priest of the Church of Satan, Anton LaVey. The pictures showing her with LaVey, included several shots of taking their version of Communion, simulating drinking blood from a goblet, offered by the priest. She even wore a pink and black medallion of Satan and the goat-headed Baphomet to the 1966 San Francisco Film Festival. Later, the beautiful actress died in a freak car accident in which she was decapitated.

Now, far be it from me to link one to the other. That is up for you to decide for yourself.

Is all this upheaval our nation is currently facing, caused by the Democrats, their Propaganda Arm, the MSM, and their young minions, due to some sort of Satanic Influence attempting to tip the scales in the fight between Good and Evil, across our land?

John Adams, the second President of these United States, delivered the following message to the Officers of the First Brigade of the Third Division of the Militia of Massachusetts on October 11, 1798:

While our country remains untainted with the principles and manners which are now producing desolation in so many parts of the world; while she continues sincere, and incapable of insidious and impious policy, we shall have the strongest reason to rejoice in the local destination assigned us by Providence. But should the people of America once become capable of that deep simulation towards one another, and towards foreign nations, which assumes the language of justice and moderation while it is practising iniquity and extravagance, and displays I have received from Major-General Hull and Brigadier, General Walker your unanimous address from Lexington, animated with a martial spirit, and expressed with a military dignity becoming your character and the memorable plains on which it was adopted. In the most captivating manner the charming pictures of candor, frankness, and sincerity, while it is rioting in rapine and insolence, this country will be the most miserable habitation in the World; because we have no government armed with power capable of contending with human passions unbridled by morality and religion. Avarice, ambition, revenge, or gallantry, would break the strongest cords of our Constitution as a whale goes through a net. Our Constitution was made only for a moral and religious people. It is wholly inadequate to the government of any other.

The reason that our nation is facing the difficulties we are is the belief by those who proclaim themselves to be the “smartest people in the room”, that they are above the old-fashioned, passe notions of morality and ethics, good and evil, and the Sovereignty of God.

In the opinion of this Christian American living in the Heartland, they have made a grave mistake.

Evil exists and these fools opened the door to Satan in our society a long time ago, just like Lil Nas X is now.

When it all comes crashing down around them, what are they going to say?

The Devil made me do it?

For we wrestle not against flesh and blood, but against principalities, against powers, against the rulers of the darkness of this world, against spiritual wickedness in high places. – Ephesians 6:12