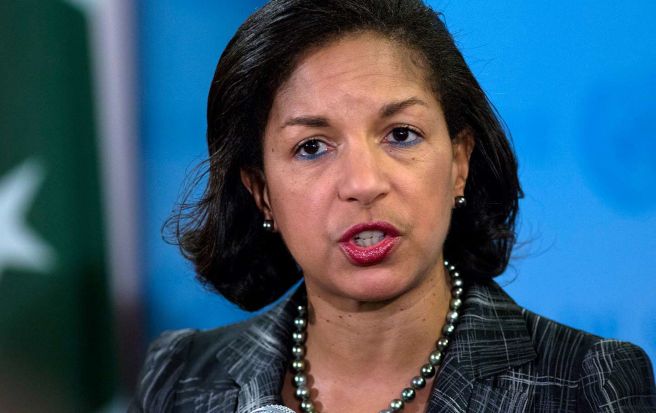 Former National Security Adviser Susan Rice, rumored to be on Joe Biden’s running mate shortlist, is dismissing what she has described as “harping” from Republicans on her role in the Obama administration’s response to the 2012 Benghazi terror attack.

Rice blasted Republicans for failing to summon any outrage when, “under Donald Trump’s watch,” three Americans were killed on a U.S. military base in Pensacola, Florida, last year in a terrorist attack inspired by Al Qaeda.

It appears to be the first foreign-directed terrorist attack on U.S. soil since 9/11 — “because the Defense Department failed to adequately vet the Saudi military personnel who are being trained on that base,” she said in an interview with The Atlantic. “But no investigation, no outrage, not a boo out of congressional Republicans.”

She went on to also cite the four Americans killed in a terrorist attack in Niger, before arguing that talk of Benghazi in 2020 is “all political distraction.”

Rice has been back in the news recently amid reports that she is on Biden’s shortlist for his vice presidential pick. Axios reported that Rice, along with Sen. Kamala Harris, D-Calif., are the final two in the running.

Should she get the nod, it is likely to resurface accusations about Rice’s role in the aftermath of the Sept. 11, 2012 attack on the U.S. consulate in Benghazi, Libya, in which four Americans died — including Ambassador Chris Stevens.

Rice, appearing on several news shows, said the attacks occurred as the result of spontaneous protests in response to an anti-Muslim YouTube video, which was later determined not to be the case.

Republicans on five House committees initially filed an interim report claiming that Rice had intentionally misled the public. However, the House Intelligence Committee later concluded that she had not.

Rice said the new rehash of Benghazi is merely an attempt to distract from the president’s disastrous coronavirus response.

“In a year when over 160,000 Americans have died from COVID-19 because of this president’s ineptitude and incompetence and disregard for human life, putting his own political interests above the health and well-being and the economy of the United States and the ability to educate our kids … they’re going to talk about Benghazi?” she said. “I say fine, let them.”

She also said that her mother warned her not to do the news shows, and asked why then-Secretary of State Hillary Clinton wasn’t doing them.

“But I agreed [to appear], as a team player. And her instinct was, ‘I smell a rat. You shouldn’t do it.’ And I said, ‘Mom, don’t be ridiculous. I’ve done this many times before.’ She was absolutely right.”

Last week, Biden told reporters that he would choose his party’s vice presidential nominee by “the first week in August.” But a source familiar with the process told Fox News on Monday that “an announcement isn’t likely this week.”

Back on September 17, 2012, I reported that, according to a certain representative of the Obama Administration, the craven attack on the Libyan Consulate, which cost 4 Americans their lives, was not premeditated.

Abcnews.go.com had the story:

U.S. Ambassador to the United Nations Susan Rice said the attack on the American consulate in Benghazi last week was not premeditated, directly contradicting top Libyan officials who say the attack was planned in advance.

“Our current best assessment, based on the information that we have at present, is that, in fact, what this began as, it was a spontaneous – not a premeditated – response to what had transpired in Cairo,” Rice told me this morning on “This Week.”

“In Cairo, as you know, a few hours earlier, there was a violent protest that was undertaken in reaction to this very offensive video that was disseminated,” Rice said, referring to protests in Egypt Tuesday over a film that depicts the Prophet Muhammad as a fraud. Protesters in Cairo breached the walls of the U.S. Embassy, tearing apart an American flag.

“We believe that folks in Benghazi, a small number of people came to the embassy to – or to the consulate, rather, to replicate the sort of challenge that was posed in Cairo,” Rice said. “And then as that unfolded, it seems to have been hijacked, let us say, by some individual clusters of extremists who came with heavier weapons… And it then evolved from there.”

Ambassador Christopher Stevens, along with three other Americans, were killed in Libya following the assault on the American consulate in Benghazi, on the 11th anniversary of the Sept. 11 attacks. Rice said the FBI is examining the attack, saying their investigation “will tell us with certainty what transpired.”

Rice’s account directly contradicts that of Libyan President Mohamed Yousef El-Magariaf, who said this weekend that he had “no doubt” the attack was pre-planned by individuals from outside Libya.

“It was planned, definitely, it was planned by foreigners, by people who entered the country a few months ago, and they were planning this criminal act since their arrival,” Magariaf told CBS News.

Unlike other embassies around the world, Rice said there were no Marines present last week to protect the consulate in Benghazi, or the main U.S. embassy in Tripoli, saying the U.S. presence there is “relatively new” since the revolution that overthrew former dictator Moammar Gadhafi.

But Rice said there was a “substantial security presence” at the consulate in Benghazi, noting that two of the four Americans killed there were providing security.

“We certainly are aware that Libya is a place where there have been increasingly some violent incidents,” Rice said. “The security personnel that the State Department thought were required were in place… It obviously didn’t prove sufficient to the – the nature of the attack and sufficient in that – in that moment.”

“But the president has been very clear. The protection of American personnel and facilities is and will remain our top priority,” Rice added. “That’s why we’ve reinforced our presence in Tripoli and elsewhere.”

More than 100 pages of documents were released to the conservative watchdog group Judicial Watch as part of a Freedom of Information Act lawsuit. Among them was a Sept. 14, 2012, email from Ben Rhodes, an assistant to the president and deputy national security adviser for strategic communications.

The Rhodes email, with the subject line: “RE: PREP Call with Susan: Saturday at 4:00 pm ET,” was sent to a dozen members of the administration’s inner circle, including key members of the White House communications team such as Press Secretary Jay Carney.

In the email, Rhodes specifically draws attention to the anti-Islam Internet video, without distinguishing whether the Benghazi attack was different from protests elsewhere.

The email lists the following two goals, among others:

“To underscore that these protests are rooted in an Internet video, and not a broader failure of policy.”

“To reinforce the President and Administration’s strength and steadiness in dealing with difficult challenges.”

The email goes on to state that the U.S. government rejected the message of the Internet video. “We find it disgusting and reprehensible. But there is absolutely no justification at all for responding to this movie with violence,” the email stated.

Judicial Watch President Tom Fitton said the documents read like a PR strategy, not an effort to provide the best available intelligence to the American people.

“The goal of the White House was to do one thing primarily, which was to make the president look good. Blame it on the video and not [the] president’s policies,” he said.

In other words, United States President Barack Hussein Obama and his Administration not only lied to America, they lied to the entire world.

So, why do the deaths of these four Americans “still matter” in the midst of the 2020 Presidential Campaign?

As I finish writing today’s post, I my mind considers the possibility of Susan Rice becoming Vice-President and possibly replacing dementia-addled Joe Biden as the Leader of the Free World, and a great many thoughts enter my head…some of them even repeatable.

I remember the image of a lone terrorist, brandishing a machine gun, standing in front of the burning Benghazi Consulate.

I also remember the image of Benghazi Barbarians dragging a murdered Ambassador Chris Stevens through the streets, taking pictures every few yards, with their cell phones.

My mind envisions the image of two brave Americans, up on a roof holding off 100 Muslim Terrorists, trying desperately to hold out for help which was denied to them, until finally the overwhelming numbers which comprised the horde of barbarians, murdered them as well.

I imagine Ambassador Stevens’ elderly mother, making the trip from the West Coast to the East Coast to pick up the lifeless body of her abused and murdered son, whom she and her entire family were so proud of.

Finally, I remember the show of hypocrisy involving members of Obama’s anti-American Administration solemnly welcoming the bodies of those brave Americans home.

Former National Security Advisor Rice…what happened at the U.S. Embassy Compound in Benghazi on September 11, 2012 still matters…to the families of those that were so savagely murdered that fateful night…and to the millions of Americans who still believe in this “Shining City on a Hill”.

We average Americans still know the truth, as the Main Stream Media, along with you an the rest of the Democrat Party Elite continue to wage an unprecedented offensive against President Donald J. Trump, while ignoring the fact that you and your potential boss are unfit for holding the Offices of President and Vice-President of the United States of America.

In fact, given the fact that you lied about how those brave Americans die, you should be not even be considered as a candidate to be Joe Biden’s running mate.

But, of course, their deaths do not matter to you, because just like Sleepy Joe and Lyin’ Hillary before him, “it’s your turn”.

However, you and your potential boss will lose just like the Queen of Mean did.

Because the lives of those or brave Americans still matter and..