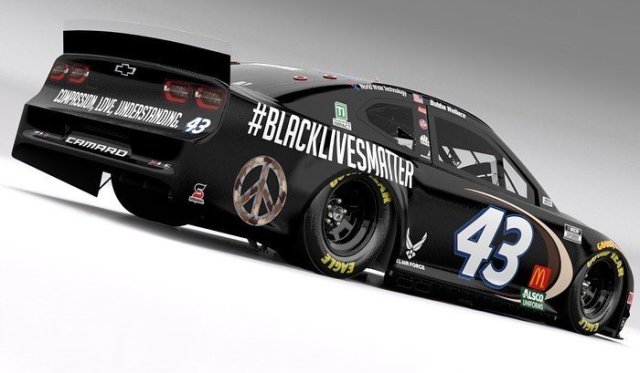 Back on February 21st of this year, Zachary J. Lechner, a historian at the State Historical Society of North Dakota and author of “The South of the Mind: American Imaginings of White Southernness, 1960-1980.”, wrote the following op ed for WashingtonPost.com

On Sunday, President Trump went racing. More accurately, this “man of the people,” in the words of driver Kurt Busch, opened the Daytona 500, known as the Super Bowl of auto racing. Besides calling out, “Gentlemen, start your engines,” and taking a lap around the track in his presidential limousine, Trump reinforced the Republican Party’s recent success in yoking itself to the cultural allure of NASCAR.

The president reminded the enthusiastic crowd of more than 100,000 people (and an even larger television audience) that “NASCAR fans never forget that no matter who wins the race, what matters most is God, family and country.” This rhetoric recalls comments made by President Richard M. Nixon during the opening of the Grand Ole Opry House in Nashville in March 1974. On stage that evening, Nixon told musician Roy Acuff that country music “talks about family, it talks about religion, the faith in God that is so important to our country and particularly to our family life. And as we all know, country music radiates a love of this nation, patriotism.”

The similarity is no coincidence. While country music and NASCAR have grown in national popularity over the past 50 years, both are still distinguished by their associations with white Southern culture. These two moments expose how the GOP has adopted a symbolic politics based on a singular version of working-class white Southernness as a predominantly right-leaning cultural entity. Privileging patriotism, Christian faith, family-centeredness and masculinity — basically anything conservatives consider “traditional” — and harnessing the power and popularity of country music and stock-car racing, the GOP has redefined the common man and staked out a challenge to the Democratic Party’s claim to be the party of the common man.

…The GOP’s NASCAR/Nashville linkage is a crucial aspect of its divisive efforts to weaponize working-class white Southernness as uniquely authentic and quintessentially American. Trump critic and country artist Maren Morris lamented that the country music community was deeply polarized (in more colorful language). So, too, is the nation. And with savviness — and a fair amount of cynicism hiding behind the flag-waving — Republicans continue to deploy their cultural Southern strategy to profit from that polarization.

Now, what it the name of Cousin Minnie Pearl’s Hat Tag a professor from North Dakota has done to consider him to be an expert on NASCAR or country music is anybody’s guess.

Judging from the content of the article, I would say, not much.

Anyway, if you will notice, the professor trashed both NASCAR and traditional country music as being too masculine and too Southern.

As a lifelong Son of the South, I would answer in return,

“So, what’s wrong with that, Skippy?’

Evidently, in the eyes of Modern American Liberals, a lot was wrong with both, as they have turned country music produced in Nashville into pop music, sung by guys and galls whose only experience riding a horse lasted as long as their Dad put quarters in the machine in front of Walmart.

Having been successful in infiltrating country music with a bunch of “pajamaboys” and “Karens”, the Liberals have now turned their sights on Nascar, beginning with banning the historical flag of the region in which the sport began and where the overwhelming majority of their fans live and work.

NASCAR held its first Strictly Stock race on June 19, 1949, at the Charlotte Speedway in North Carolina. Some 13,000 fans were on hand to watch Glenn Dunnaway finish the 200-lap race first in his Ford; however, Jim Roper (who drove a Lincoln) collected the $2,000 prize after Dunnaway was disqualified for illegal rear springs on his vehicle. In the early years of NASCAR, competitors drove the same types of cars that people drove on the street–Buicks, Cadillacs, Oldsmobiles, among others–with minimal modifications. (Today, the cars are highly customized.)

In 1950, the first NASCAR-based track, the Darlington Raceway in South Carolina, opened. More new raceways followed, including the Daytona International Speedway, which opened in 1959. Lee Petty won the first Daytona 500, which was run on February 22 of that year. The Daytona 500 became NASCAR’s season opener and one of its premiere events. Lee Petty’s son Richard, who began his racing career in 1958, won the Daytona 500 a record seven times and became NASCAR’s first superstar before retiring in 1992. On February 18, 1979, the first live flag-to-flag coverage of the Daytona 500 was broadcast on television. An end-of-the-race brawl between drivers Cale Yarborough and Donnie and Bobby Allison was a huge publicity generator and helped boost NASCAR’s popularity on a national scale.

In 1972, France’s son, William France Jr., took over the presidency of NASCAR from his father. Over the next three decades, the younger France (1933-2007) was instrumental in transforming NASCAR from a regional sport popular primarily in the southeast U.S. into one with a global fan base. France led NASCAR into a new era of lucrative corporate sponsorships and billion-dollar TV contracts, which continues to this day.

As recent events, such as the banning of the Confederate Battle Flag and the kerfluffle over Bubba Wallace seeing a noose that wasn’t really there, demonstrate, Liberals are well on their way to taking over the “divisive” product of “Southern Culture” that was the glorious, gritty, exciting sport of NASCAR.

So, with Bubba Wallace proudly displaying “Black Lives Matter” on his car, can we expect the LGBTQ Pick Satin Special to be at the Daytona 500 in the near future?

That would give “Drag Racing” a whole new meaning, wouldn’t it?

…Forgive me, Lord, and be with all the starving pygmies in New Guinea. Amen.