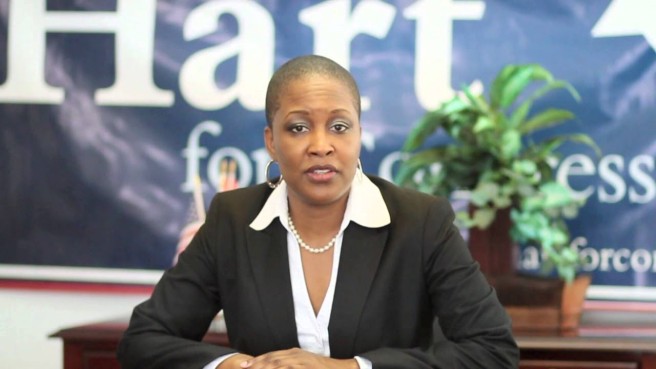 “Oh, what a tangled wed we weave…”

Former Memphis City Schools Board President Tomeka Hart revealed Wednesday that she was the foreperson of the jury that convicted former Trump adviser Roger Stone on obstruction charges last year — and soon afterward, her history of Democratic activism and a string of her anti-Trump, left-wing social media posts came to light.

In at least one case, Hart even posted specifically about the Stone case, as she retweeted an argument in January 2019 that it was hypocritical to say federal authorities had used excessive force when a tactical team arrested the 67-year-old Stone in a dramatic predawn raid.

Meanwhile, another Stone juror, Seth Cousins, donated to former Democratic presidential candidate Beto O’Rourke and other progressive causes, federal election records reviewed by Fox News show. And, it emerged that U.S. District Judge Amy Berman Jackson had denied a defense request to strike a potential juror who was Obama-era press official with admitted anti-Trump views — and whose husband worked at the same Justice Department division that handled the probe that led to Stone’s prosecution.

The revelations came as President Trump has called the handling of Stone’s prosecution “ridiculous” and a demonstrably unfair “insult to our country.” They raised the prospect that Stone’s team could again seek a new trial, especially if Hart or other jurors provided inaccurate responses to their pre-trial questionnaires concerning their social media activity.

The drama began when Hart confirmed to CNN and other media organizations Wednesday that she had written a Facebook post supporting the Justice Department prosecutors in the Stone case who abruptly stepped down from their posts on Tuesday, saying she “can’t keep quiet any longer.” The prosecutors apparently objected after senior DOJ officials overrode their recommendation to Jackson that Stone face up to 9 years in prison.

“I want to stand up for Aaron Zelinsky, Adam Jed, Michael Marando, and Jonathan Kravis — the prosecutors on the Roger Stone trial,” Hart wrote in the post. “It pains me to see the DOJ now interfere with the hard work of the prosecutors. They acted with the utmost intelligence, integrity, and respect for our system of justice.”

Hart added: “As foreperson [of the jury], I made sure we went through every element, of every charge, matching the evidence presented in the case that led us to return a conviction of guilty on all 7 counts.”

Independent journalist Mike Cernovich, not CNN, then first reported that a slew of Hart’s other publicly available Twitter and Facebook posts readily suggested a strong political bias. Some of Hart’s posts were written as Stone’s trial was in progress.

Hart, who unsuccessfully ran for Congress as a Democrat in 2012, quoted someone in an August 2017 tweet referring to Trump as a member of the KKK.

In January 2019, she retweeted a post suggesting that it was hypocritical to argue that excessive force was used in Stone’s arrest.

“Gotta love it!” Hart wrote on Jan. 13, 2018, in response to a news report that a vulgarity had been projected onto the Trump International Hotel in Washington, D.C.

A week later, on Jan. 21, 2018, she shared an opinion piece entitled, “What’s so extremely, uniquely wrong about Trump’s presidency.”

On March 24, 2019, Hart shared a Facebook post saying that Republicans who complained about then-Special Counsel Robert Mueller’s probe were deliberately “ignoring the numerous indictments, guilty pleas, and convictions of people in 45’s inner-circle,” referring to Trump.

And, on Nov. 15, 2019 — the day she voted to convict Stone on seven counts of obstruction, witness tampering and making false statements to Congress — Hart tweeted two “heart” emojis, followed by two pump-fist emojis. (None of Stone’s charges accused him of engaging in a criminal conspiracy with Russia or any other actors concerning election interference; instead, his offenses related to his statements concerning his contacts with WikiLeaks and others.)

If Hart have provided misleading answers on her jury form concerning her political or social media activity, her views on Trump and the Russia probe, or other related matters, there could be grounds for Stone’s team to seek a new trial, legal experts told Fox News.

Hart did not immediately respond to Fox News’ request for comment. The Memphis Commercial Appeal noted that she was a native of the city and had served a term as the president of its school board.

Hart’s posts surfaced the same day that Jackson, who oversaw the Stone case, unsealed her order from earlier this month denying Stone’s request for a new trial.

What the above article does not mention is the fact that the Memphis City School Sytem no longer exists.

The Memphis City School Board used some legal loopholes to bail out of a horrible demise, caused by their own poor stewardship, by taking over the Shelby County School System, which they are presently running into the ground.

That act forced at least of the municipalities in Shelby Country to formed their own separate school systems in order to avoid what happened in Memphis.

So, not only were those who prosecuted Stone biased toward the Democrats, the foreperson of the jury was a Democratic activist and several of the jurors were biased as well.

To say that the fix was in would be an understatement.

isn’t it interesting how so much of the fallout and judicial action that was taken in the “Russian Collusion Investigation by Mueller and his Democratic Lynch Mob centered around the State of New York, specifically the Southern District of New York in addition to the courtroom of Judge Amy Berman Jackson?

The SDNY had been the stomping grounds of several of those involved in that Legal Lynch Mob out to get President Trump, including Former FBI Director Comey, FBI IG Horowitz, Mueller Investigator Andrew Weissman, and Manhattan DA Cyrus Vance, Jr.

All of them either worked in that office or had judicial standing in that district.

To have a well-known no-class Democratic Activist like Tomeka Hart be named the foreperson on the jury hearing the case against Roger Stone was simply the cherry on top of the Russian Collusion Fairy Tale Sundae.