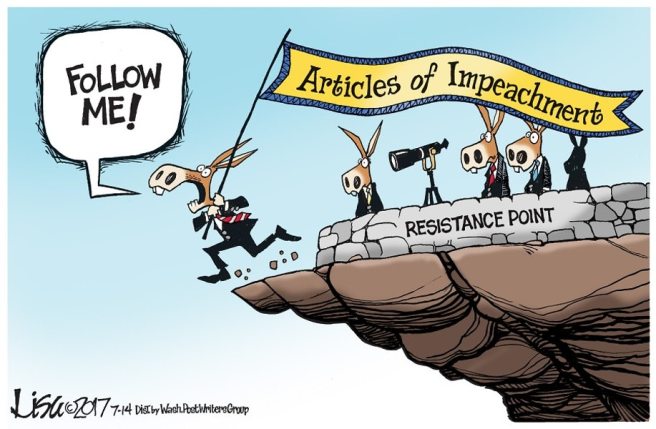 It’s just too much fun to point out. And the reason is that for 2-1/2 years or longer we’ve had to sit here essentially playing defense while a coalition of the Democrats and the Washington establishment and the media (which is all the same thing) has tried to run Donald Trump out of office with a very superiorist attitude. They are better people than we are. They are smarter and all of this. Donald Trump doesn’t deserve to have won, and so he shouldn’t — and they think they had the authority and power to overturn the election results. – Rush Limbaugh, 8/1/2019

A majority of House Democrats now supports launching an impeachment inquiry for President Trump, according to a Fox News tally — the latest sign that Robert Mueller’s shaky testimony did little to arrest the momentum inside the caucus for that politically explosive step.

With fresh support for the inquiry from California Rep. Salud Carbajal, the number of House Democrats in favor reached 118 on Friday. That’s more than half of the 235 House Democrats.

“Our nation has seen and heard things from this president that have no place in our democracy. I believe it is time to open an impeachment inquiry into President Donald Trump,” Carbajal tweeted.

For now, the milestone is symbolic. House Speaker Nancy Pelosi remains cool to the idea, insisting Congress proceed with its investigations before considering such a drastic step. Late Friday, the speaker sought to assure members on the progress of those Trump investigations, releasing a bullet-point statement listing various developments.

“The Mueller report and his testimony last week confirmed that the President’s campaign welcomed Russian interference in the election, and laid out ten instances of the President’s obstruction of justice,” she said. “To protect our democracy and our Constitution, Democrats in the Congress continue to legislate, investigate and litigate. … In America, no one is above the law. The President will be held accountable.”

But the rapidly growing number in support of an impeachment inquiry shows that many members are not heeding her calls for patience, and not too concerned that the former special counsel’s testimony last week turned up no new bombshells.

Suggesting they’re driven in large part by the lingering allegations of obstruction, House Foreign Affairs Committee Chairman Eliot Engel, D-N.Y. — one of the most senior members to back an impeachment inquiry — said last week that the president has “abused the power of his office in an effort to stymie a legitimate investigation into his campaign’s involvement with Russia.”

A total of two-dozen lawmakers have endorsed the impeachment inquiry since Mueller’s back-to-back hearings. Those in support include 16 members of the House Judiciary Committee that would lead such an effort.

While confusion hangs over what exactly Democrats are pursuing, several have indicated they see their push as the prelude to a decision on whether to recommend articles of impeachment at the committee level. Some Democrats even said after the Mueller hearings that they were already proceeding with an “impeachment investigation.”

Committee Chairman Jerrold Nadler, D-N.Y., as a next step, filed a petition in D.C. federal court to obtain grand jury materials from the former special counsel’s investigation. The petition claimed that the committee needed the information in order to determine whether to recommend articles of impeachment, in an attempt to give the request more weight in the eyes of the court.

But Nadler has not formally endorsed the impeachment inquiry process, arguing that the committee is essentially already doing the work of impeachment.

“Too much has been made of the phrase impeachment inquiry,” Nadler said, noting the panel’s ongoing probes of the president and his associates.

Trump, meanwhile, declared the Mueller testimony a “bust” while saying nothing will ever be “good enough” for Democrats determined to go after him.

“Robert Mueller’s testimony, and the Mueller Report itself, was a disaster for this illegal Democrat inspired Witch Hunt,” he tweeted afterward.

Mueller stood by his team’s findings at last week’s hearings—reiterating that the special counsel’s office found no evidence of a criminal conspiracy between Trump associates and Russia, while also stating that the president was not exonerated on allegations of obstruction of justice despite his assertions to the contrary.

But in doing so, he also repeatedly refused to drift beyond the bounds of his report. This was, to an extent, expected as Mueller had signaled he would only address material already in the public record.

Meanwhile, Republicans on the House Judiciary Committee have argued that an impeachment inquiry is “not an official thing” and blasted the latest court filing. Committee Ranking Member Doug Collins, R-Ga., said last week that Democrats have “no right” to the grand jury materials to begin with.

“Chairman Nadler’s legal action here is sure to fail, weakening Congress’s ability to conduct oversight now and into the future. If my colleagues want grand jury information, they should propose legislation allowing Congress to access it,” he said in a statement. “Democrats want to convince their base they’re still wedded to impeachment even after [last week’s] hearing, but a baseless legal claim is an odd way to show that.”

But even as his committee proceeds with court filings and their Trump-focused investigation, Nadler has danced around whether Democrats are officially running an impeachment inquiry.

“We have impeachment resolutions before the committee. We are conducting investigations to determine whether we should report those impeachment resolutions to the House or direct our own and report those to the House. We’re considering those resolutions,” Nadler said on ABC’s “This Week” Sunday. “We’ll make a determination after we get more evidence as to the president’s crimes that we had from the Mueller report and also from other things.”

He added: “We’re investigating whether to report — whether to approve articles of impeachment before the committee.”

And despite her public reluctance to proceed with impeachment, Pelosi said she is keeping options open.

“Let’s get sophisticated on this,” she said last week. “We will proceed when we have what we need to proceed–not one day sooner.”

San Fran Nan is attempting to somehow combat Trump’s rising popularity and their tanking favorability ratings. To her credit, she has figured out that impeaching President Trump is not the answer to the Democrats’ problems.

The past two years have clearly shown that the Modern Democratic Party remains consumed by their grief over losing the 2016 Presidential Election and their hatred for the man who is now sitting in the Oval Office, Donald J. Trump.

The Democrats put all their eggs in one basket: their fervent desire that somehow, someway, Robert Mueller could find some sort of impeachable offense against President Trump.

When he did not, they brought him in to testify, thinking that he would give some sort of information which would set the President up to be impeached.

That didn’t happen and now the floor of the House of Representatives resembles the Tower of Babel…a whole lot of taking going on with no one listening to each other because they do not speak the same language.

Thee biggest problem that the Democrats face is the fact that the President keeps on succeeding in fulfilling his Campaign Promises even though the Democrats and their Propaganda Arm, the Main Stream Media, have thrown every thing that they could think of at him, including Fake News Stories that they desperately made up.

The economy is booming, Trump keeps winning, and the Dems keep losing.

Despite the Fed’s efforts to slow America’s comeback down, new homes are being built and unemployment remains low.

And, average Americans are loving it.

They learned nothing at all during their 2 years out of power.

For the Democratic Party to begin winning elections again, they are going to have to abandon the Far Left Political Ideology, inspired by Karl Marx and Saul Alinsky, which they have bitterly clung to as their “religion” for the past several decades.

The absurdity and downright anti-Americanism of their “Tenets of Faith” have been anathema to Americans living in America’s Heartland, the ones responsible for an American Businessman and Entrepreneur being elected our 45th President.

Those who sit in judgment of us average Americans like the Pharisees in the ancient Holy Land are going to have to climb down from their bar stools at the Washington Capitol Hill Country Club, and come home to visit us “common” people, attend ballgames, picnics, charitable public events, and even…GASP!…attend church with us, if they wish to represent average Americans in our Sovereign Nation’s Halls of Power again.

However, realistically, I do not see any of my suggestions coming to pass.

There are many more “Tenets of Faith” that the Democrats believe. However, for the sake of brevity, I will move on.

Years ago, the Democratic Party and reality took divergent paths.

Instead of serving the wishes of the American people as they are SUPPOSED to be doing, the Democrats in the House of Representatives are only serving themselves by refusing to end their quest for impeachment.

If they do not wake up and smell what they are shoveling and start taking care of the “will of the people”, the Democrats will go the way of the Whigs.

Their party’s slow, painful demise will be great for the Popcorn Industry….

And, judging from their lack of accomplishments thus far, the Pelosi-led House of Representatives is going to do nothing to halt the Dem’s downward descent into oblivion.

Pass the salt and butter, please.