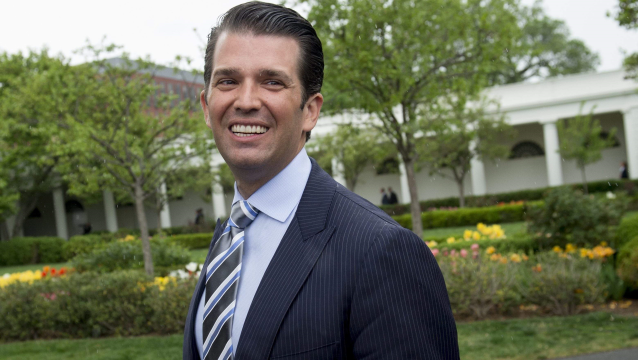 .@DonaldJTrumpJr has already spent dozens of hours testifying in front of Congressional committees. Endless investigations—by either party—won't change the fact that there was NO collusion. It's time to move on. It’s time to focus on ISSUES, not investigations. https://t.co/fbFH5uMLUz

The Senate Intelligence Committee has issued a subpoena for Donald Trump Jr., a source confirmed to Fox News on Wednesday.

The subpoena is in regards to remarks President Trump’s oldest son made while testifying before the Senate Judiciary Committee in 2017, The Associated Press reported, citing a person familiar with the situation.

The committee’s desire to speak to Trump Jr. follows testimony from Michael Cohen, the president’s former attorney, in February.

Cohen told a House committee at the time that he had briefed Trump Jr. approximately 10 times about a plan to build a Trump Tower in Moscow. Trump Jr. told the Senate Judiciary Committee in 2017 he was only “peripherally aware” of the proposal.

The Senate Intelligence Committee has been looking into Russian election interference and Trump’s ties to Russia for the last two years.

The move to subpoena Trump Jr. was met with disapproval from House Minority Leader Kevin McCarthy, R-Calif., who argued that politicians should redirect their energy away from investigating potential Russian collusion.

A source close to Trump Jr. also aired their frustrations about the subpoena to Fox News while slamming Senate Intelligence Committee Chairman Richard Burr, R-N.C. The source spoke about Trump Jr.’s prior testimony, arguing that he has consistently been cooperative.

“Don is a private citizen, who has already been cleared by Mueller after a two-year investigation. He has done 8-9 hours of testimony in front of Senate Intel already and 27 hours of testimony in front of various committees in total,” the source said. “When he originally agreed to testify in front of the Senate Intel Committee in 2017, there was an agreement between Don and the Committee that he would only have to come in and testify a single time as long as he was willing to stay for as long as they’d like, which Don did.”

A comment from Trump Jr. was not immediately available.

It probably would not be repeatable …and wouldn’t blame one bit.

So, why is the Senate Intelligence Committee, chaired by Richard Burr, subpoenaing him to come back to be grilled some more?

WASHINGTON — The Republican at the helm of the Senate’s investigation into Russian interference in the 2016 presidential election backed on Wednesday the assessment by American intelligence agencies that Moscow favored Donald J. Trump in the race, contradicting both the president and fellow Republicans in the House.

Senator Richard M. Burr of North Carolina, the chairman of the Senate Intelligence Committee, said in a statement that he saw “no reason to dispute” the intelligence assessment, which was delivered in the final weeks of the Obama administration.

Mr. Burr’s statement, while indirect, offered a clear rebuke to Mr. Trump’s most ardent supporters in the Republican Party and in the right-wing news media, who have sought to cast the assessment as the shoddy work of Obama loyalists bitter over Mr. Trump’s election victory. Russia’s only goal, those supporters have insisted, was to sow chaos, and thus it could not have colluded with a campaign it cared little about.

Can you say “Vichy Republican”, gentle readers? I knew that you could.

So, what about the 45th President of the United States of America has put a burr up Burr’s saddle?

Trump is the first non-politician since our nation’s early days to become the President of the United States of America.

To put it bluntly, those Washington Insiders on both sides of the Political Aisle who are so offended by President Trump are the ones who put him in office.

A bunch of Never-Trumpers who were in in the Republican Party,  such as Paul Ryan, left Congress before the 2018 Midterm Elections. offended that a rank outsider somehow became our 45th President.

In fact, the professional politicians on BOTH sides of the political aisle who refuse to accept the findings of the Mueller Report and to let it go, are making those same average Americans ANGRY.

Anger has played an important part in the forging of this great country.

It was anger that formed our country….an anger over being held captive to “Taxation Without Representation”…an anger which, as a prime example of history repeating itself, led Americans to choose a Citizen Statesman for their 45th President over a Professional Politician.

It is this anger, which also propelled Donald J. Trump to his victory in the Republican Primary Race…and those who prefer the Washingtonian Status Quo seem to have forgotten that fact.

That is why the Republican Establishment, at least some of them like Sen. Burr, continue to “bite the hand that feeds them”, attacking President Trump on a regular basis.

The funny thing is, for all of their angst and “concern”, if they had not accepted the reality of his Primary Victory, and the fact that Americans were angry, they would have gone down to defeat in 2016 and the company would be suffering under the oppressive rule of President Hillary Clinton.

The Republican Establishment would have never achieved victory by once again trying to push the Jello of “Liberal Moderation” up a hill.

The American people were tired of Political Correctness and anti-American political expediencies being forced down our throats by both political parties and trumpeted by their lackeys in the Main Stream Media.

Donald Trump, for all of his brashness and braggadocio, was a breath of free air and, quite frankly an anomaly. He was not a professional politician. He was a businessman who wanted to become a public servant.

And, so far, what he has accomplished as President while being the subject of a 2-year Witch Hunt has demonstrated that he was up to the challenge.

During his actions since taking office, we have seen Trump exemplify leadership ability and a concern for our country that we did not from his predecessor.

Meanwhile, those on the left are still participating in National Temper Tantrum, as if they have the power to overthrow our Constitution and to end Trump’s Presidency for no reason other than they do not like him.

And, the NeverTrumpers in the GOP Elite would gladly help them.

Unfortunately for the Deep State Operatives within our Intelligence Agencies, Special Counsel Mueller DID NOT find any collusion between Trump and the Russians…plus Attorney General William Barr is beginning an investigation into how Mueller’s Witch Hunt got started.

And to those Republicans who would rather stand with the Democrats than stand up for a Republican President, it is time for you to go ahead and get it over with and switch parties, go stand with your Democrat Friends, and then sit down and shut up.

It’s not about what you want anymore.

It is about what us average Americans want.

And, we want to continue MAKING AMERICA GREAT AGAIN.