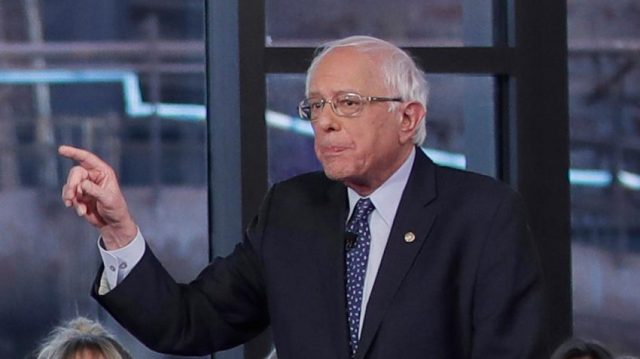 Socialism in general has a record of failure so blatant that only an intellectual could ignore or evade it. – Thomas Sowell

Bernie Sanders took the stage at a fiery Fox News town hall in Bethlehem, Pennsylvania on Monday, and sparks flew almost immediately, as Sanders defiantly refused to explain why he would not voluntarily pay the massive new 52-percent “wealth tax” that he advocated imposing on the nation’s richest individuals.

“We’ll get through this together,” Sanders said at one point, as tensions flared.

Sanders later admitted outright that “you’re going to pay more in taxes” if he became president. Just minutes before the town hall began, Sanders released ten years of his tax returns, which he acknowledged showed that he had been “fortunate” even as he pushed for a more progressive tax system.

But pressed by anchors Bret Baier and Martha MacCallum as to why he was holding onto his wealth rather than refusing deductions or writing a check to the Treasury Department, Sanders began laughing dismissively and, in an apparent non sequitur, asked why MacCallum didn’t donate her salary. (“I didn’t suggest a wealth tax,” MacCallum responded.)

“Pfft, come on. I paid the taxes that I owe,” Sanders shot back. “And by the way, why don’t you get Donald Trump up here and ask him how much he pays in taxes? President Trump watches your network a little bit, right? Hey President Trump, my wife and I just released 10 years. Please do the same.”

Asked whether Sanders’ success — and subsequent decision to hold onto his cash — wasn’t an implicit endorsement of the capitalist system he has repeatedly called dysfunctonal, Sanders rejected the notion out of hand.

“When you wrote the book and made the money, isn’t that the definition of capitalism and the American dream?” Baier asked, referring to Sanders’ bestselling 2016 memoir “Our Revolution.”

“No,” Sanders replied flatly, after a pregnant pause. “What we want is a country in which everyone has an opportunity. … A lot of people don’t have a college degree. A lot of people are not United States senators.”

Sanders doubled down on his previous defenses of his wealth, which even some progressives have called hypocritical.

“This year, we had $560,000 in income,” Sanders said. “In my and my wife’s case, I wrote a pretty good book. It was a bestseller, sold all over the world, and we made money. If anyone thinks I should apologize for writing a bestselling book, I’m sorry, I’m not gonna do it.”

On whether he supported abortions that occur up to the moment of birth, Sanders retorted, “I think that happens very, very rarely,and I think this is being made into a political issue. At the end of the day, I think the decision over abortion belongs to a woman and her physcian, and not the government.”

Sanders also said felons, including rapists and murderers, should be able to vote from prison. But he insisted he was not simply courting more potential Democrat voters.

The Tax Day town hall took place as Sanders emerged as the fundraising front-runner among Democrats, and sought to further distinguish himself from a crowded field of liberal candidates who have largely embraced his progressive proposals, from a sweeping ‘Medicare for All’ overhaul to a higher minimum wage and free public college education.

“I think Trump is a dangerous president, but if all we do is focus on him, we lose,” Sanders said at the town hall.

Separately, Sanders acknowledged that his proposed Medicare for All health care overhaul — which has also been embraced by other 2020 Democrat hopefuls, including Kamala Harris and Elizabeth Warren — would mean that many Americans would “pay more in taxes.”

Some estimates put the total costs for the plan over 10 years at more than $32 trillion, and say it would necessitate historic tax hikes.

Bernie Sanders is like all Marxists. They want all of us to “share the wealth” WITH THEM.

It’s no wonder that he makes the con job known as Socialism sound good to young minds full of mush.

He has had years of practice.

Bernard “Bernie” Sanders was born in Brooklyn, New York on September 8, 1941, to Polish immigrants of Jewish descent. After attending Brooklyn College for one year, he transferred to the University of Chicago (UC) and earned a bachelor’s degree in political science in 1964. At UC, Sanders joined the Young Peoples Socialist League (youth wing of the Socialist Party USA) as well as the Congress of Racial Equality and the Student Peace Union.

After college, Sanders lived briefly on an Israeli kibbutz, then moved to Vermont where he worked variously as a carpenter, filmmaker, writer, and researcher. In 1971 he joined the anti-war Liberty Union Party (LUP), on whose ticket he made unsuccessful runs for the U.S. Senate in 1972 and 1974, and for Governor of Vermont in 1976. Sanders’s LUP platform called for the nationalization of all U.S. banks, public ownership of all utiliies, and the establishment of a worker-controlled federal government.

Sanders resigned from LUP in 1979 and became a political Independent. Two years later he was elected mayor of Burlington, Vermont, a post he held until 1989. Sanders created some controversy when he hung a Soviet flag in his mayoral office, in honor of Burlington’s Soviet sister city Yaroslav.

According to an Accuracy In Media report, Sanders during the 1980s “collaborated with Soviet and East German ‘peace committees'” whose aim was “to stop President Reagan’s deployment of nuclear missiles in Europe.” Indeed, he “openly joined the Soviets’ ‘nuclear freeze’ campaign to undercut Reagan’s military build-up.”

In 1985 Sanders traveled to Managua, Nicaragua to celebrate the sixth anniversary of the rise to power of Daniel Ortega and his Marxist-Leninist Sandinista government.

In 1986 Sanders ran unsuccessfully for Governor of Vermont, and two years later he made a failed bid for a seat in the U.S. House of Representatives.

In November 1989 Sanders addressed the national conference of the U.S. Peace Council, a Communist Party USA front. The event focused on how to “end the Cold War” and “fund human needs.” Fellow speakers included such notables as Leslie Cagan, John Conyers, and Manning Marable.

Choosing not to seek re-election to a fifth term as mayor, Sanders spent 1989-90 working as a lecturer at Hamilton College in upstate New York and the John F. Kennedy School of Government at Harvard University.

During the 1990s, Sanders participated multiple times in the Socialist Scholars Conferences that were held annually in New York City.

…Sanders has long maintained that “global warming/climate change” not only threatens “the fate of the entire planet,” but is caused chiefly by human industrial activity and must be curbed by means of legislation strictly limiting carbon emissions. In 2007 Sanders and Senator Barbara Boxer proposed the Global Warming Pollution Reduction Act, which, according to an MIT study, would have imposed on U.S. taxpayers a yearly financial burden of more than $4,500 per family, purportedly to check climate change. In February 2010 Sanders likened climate-change skeptics to people who had disregarded the Nazi threat prior to WWII: “During that period of Nazism and fascism’s growth … there were people in this country and in the British parliament who said, ‘Don’t worry! Hitler’s not real! It’ll disappear!’” Accusing “big business” of being “willing to destroy the planet for short-term profits,” Sanders in 2013 said that “global warming is a far more serious problem than al Qaeda.” Stating unequivocally that “the scientific community is unanimous” in its belief that “the planet is warming up,” Sanders the following year declared that the “debate is over” and emphasized the importance of “transform[ing] our energy systems away from fossil fuels.”

In September 2011, Sanders was the first U.S. Senator to support the anti-capitalist Occupy Wall Street movement, lauding its activists for focusing a “spotlight” on the need for “real Wall Street reform.”

In March 2013, Sanders and fellow Senator Tom Harkin together introduced a bill to tax Wall Street speculators. “Both the economic crisis and the deficit crisis are a direct result of the greed, recklessness, and illegal behavior on Wall Street,” said Sanders.

Over the years, Sanders’s political campaigns have received strong support from such organizations as the AFL-CIO, the American Association for Justice, the Backbone Campaign, the Council for a Livable World, the Democratic Socialists of America, and Peace Action.

In other words, he’s a Far Left, Socialist Whackjob.

We are already suffered for 8 long years under one Far Left Socialist Whackjob, we sure as heck don’t need to follow the Presidential Nightmare that was the Obama Presidency with another.

French sociologist and political theorist Alexis de Tocqueville (1805-1859) traveled to the America in 1831 to study our prisons and returned to France with a wealth of broader observations that he compiled together in “Democracy in America” (1835), one of the most influential books of the 19th century. With its spot-on observations on equality and individualism, Tocqueville’s work remains a valuable explanation of America to Europeans and of Americans to ourselves.

He once observed that

In other words, the failed political ideology of socialism takes away the exhilaration and fulfillment of individual achievement and replaces it with self-sacrifice in servitude to the State, for the good of the Central  Nanny-State Government, which, in turn, promises to “share the wealth”, but, as was the case in the old Soviet Union, and more recently, Venezuela, never does.

The great Sir Winston Churchill once said that

I would rather be blessed than miserable.