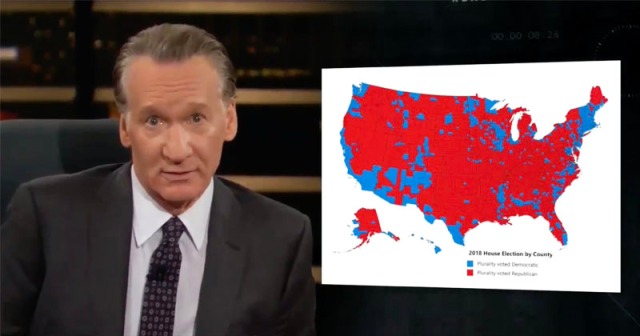 Comedian Bill Maher mocked red state voters on his show Friday night, insisting that they are merely jealous of the liberal elite lifestyle.

During a segment about Amazon’s new headquarters on “Real Time With Bill Maher,” the HBO host said he knows red state voters want a more cosmopolitan lifestyle because their local governments submitted proposals to bring Amazon to their cities.

“There are no red carpets in Wyoming and no one ever asks you, ‘who are you wearing?’ because the answer is always Target,” Maher said as the audience laughed. “We have orchestras, theater districts, world class shopping, we have Chef Wolfgang Puck, they have Chef Boyardee.”

The host continued, “Our roofs have solar panels, theirs have last year’s Christmas lights … the flyover states have become passed-over states, that’s why red state voters are so pissed off.”

Maher concluded the brutal mocking by suggesting Amazon relocate to a red state in order to bring those voters more prosperity.

“If you leave the red states behind, they’re going to keep getting angrier, crazier,” Maher declared.

As we say down here in America’s Heartland,

Why don’t Democrat Liberals like Bill Maher understand why they lost the Presidency on the night of November 8, 2016?

While spending time lately on Twitter, which I really should cut down on, as it tends to increase my blood pressure to Mt. Vesuvius Levels, I continuously encounter individuals like the shrill and strident Maher who echo the sentiments of the rest of the Far Left self-proclaimed geniuses who cost the Democratic Party the Presidency who believe that anybody who lives between the coasts and who works hard for a living while believing in God and Country, is a Jingoistic imbecile.

During the nightmare known as the Obama Presidency, children and young adults, attending American Institutes of Learning from kindergarten to college campuses were taught by Liberal teachers and professors that America was “just another country” and to be a patriot was to somehow be close-minded, ignorant, and bigoted, not necessarily in that order.

What those who consider themselves to be the smartest people in the room, like Ann Coulter’s ex, Bill Maher, do not understand is that the exceptionalism of America lies not in the Halls of Power…nor in the Halls of Academia. But, rather in the courage and spirit of the average American. A courage and spirit, which our history proves, has driven American Citizens to build a nation, which is indeed exceptional among all others.

The secret of this country’s exceptionalism is the “Average Joe”, the 9 to 5′er, working himself into the grave to try to provide for his family, common among average Americans living in America’s Heartland whom Maher seeks to degrade and insult.

And, it was this same “Average Joe” whom, being fed up with the Democratic Party’s Far Left Crusade against anything and everything traditionally American, went to the voting booth on that historic day in November of 2016 and elected Donald J. Trump, a Citizen Statesman, as our 45th President.

Average Americans are no more “jealous ” of Liberals living on the coasts than they are of dogs being able to lick their own behinds.

And that, boys and girls, is why the Liberals in the Far Left Democratic Party are still showing the world their posteriors while continuing to throw the longest mass temper tantrum in recorded history.

As of today, Liberals outnumber Conservatives in only SIX states.

While the East and “Left” Coast are indeed heavily populated in their metropolitan areas with Liberals (some of them even Legal Citizens), the reality of what actually happened on November 8th, 2016 can been plainly seen on any Electoral Map.

It was an overestimation of their own intellect and an underestimation of the intelligence and unbridled love of average Americans for OUR COUNTRY, that cost the Democrats the Presidency and those Special Elections on Tuesday Night.

To be blunt, Bill Maher and the rest of “The Smartest People in the Room”…SIMPLY ARE NOT AS INTELLIGENT AS THEY BELIEVE THEMSELVES TO BE.

Their unbridled hatred for President Trump and, quite literally, all things American, has created an enormous disconnect between the Democratic Party and average Americans living in the Heartland.

So, to summarize, by labeling Patriotism as “Jingoism” and by ridiculing those of us who love our country and hold fast to Traditional American Values who happen to reside in America’s Heartland, the Democratic Party cost themselves the Presidency…going from the “In Crowd” to the Outhouse.

If I was a Modern American Liberal with any sort of self-awareness, I would be throwing a temper tantrum, too…over my own ungrateful arrogant ignorance that caused the defeat of  my Presidential Candidate and cost my party everything on that fateful Tuesday Night.

However, as Bill Maher clearly demonstrates, the Democrats still don’t get it.

Would you like some cheese with all that whine?