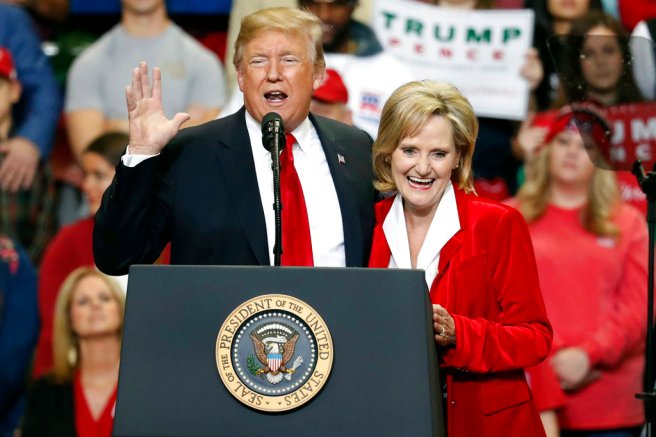 Republican Sen. Cindy Hyde-Smith has won Mississippi’s Senate runoff, defeating Democrat Mike Espy despite controversy over recent comments. Hyde-Smith had 56 percent of the vote to Espy’s 44 percent when the Associated Press called the race with more than three-quarters of all precincts reporting. The result means Republicans will hold a 53-47 majority in the Senate next year.

The runoff for the remainder of Thad Cochran’s term was held because neither candidate got a majority of the vote in a crowded race Nov. 6. Since then, Hyde-Smith has drawn scrutiny for saying she would attend a “public hanging” for a supporter, before apologizing and calling the comment an exaggerated form of regard.

Espy, who is African-American, called Hyde-Smith’s “public hanging” comments a “black eye” for the state. Hyde-Smith ultimately apologized to “anyone offended” by her remarks, which she said were an exaggerated form of regard for a supporter. But the comments, which some viewed as connected to Mississippi’s history of lynching, brought unexpected scrutiny to Hyde-Smith, putting Republicans on edge even in a state that hasn’t elected a Democrat to the Senate since 1982.

President Donald Trump visited the state Monday in an attempt to make sure GOP voters are engaged for the runoff.

“Don’t take any chances,” Trump implored supporters at the first of two rallies. “You have to vote. We cannot allow Nancy Pelosi and Chuck Schumer to erode [GOP control of the Senate] by winning the great state of Mississippi.”

Hyde-Smith’s victory makes her the first woman elected to represent Mississippi in the Senate.

Hyde-Smith’s victory was not an easy one.

Guess who attempted to come to the rescue of the disgraced and indicted Former Secretary of Agriculture under Bill “Bubba” Clinton?

Earlier in the day, Breitbart.com reported that

MoveOn.org, which has been massively backed by Soros, has organized a phone bank and a number of other iniatives to mobilize voters for Espy. “We need to contact every person on this list to make sure they vote in the Nov. 27 runoff!” exclaimed the radical organization on its website.

Besides funding from Soros, MoveOn.org has also been financed by the Tides Foundation, a leftwing sponsorship organization that has itself received donations from Soros and has partnered with Soros’s Open Society Foundations.

Over at Color of Change, another group financially backed by Soros, supporters are being urged to vote for Espy.

Breitbart News reported in September that Soros is a financial contributor to The Collective.

The group officially endorsed Espy in the Senate race and has been helping to drive voters to the polls, including with a text-messaging program.

On November 20th, I wrote about the “Robo-calling” on behalf of Mike Espy by an organization named Open Progress, a 501 non-profit with a very profitable Get-Out-The-Vote business named OPro By Open Progress LLC.

Open Progress’ co-founder is Elizabeth Haynes, Founder and President of a specialist market research and analytics firm which employs a data-driven approach to solving questions in the consumer, retail, and media sectors for the buy-side.

Open Progress worked on both the Doug Jones Campaign in Alabama and the Conor Lamb Campaign in Pennsylvania.

As the Church Lady would say, “Isn’t that special?”

Well, as one of my favorite old hymn’s title would suggest, “Bless Be the Tie That Binds”.

Coming full circle, now we know who paid for all of that “Robo-calling” and “Robo-texting” to Mississippi Voters.

The Puppet Master himself, George Soros, was once again pulling the strings of a Democratic Candidate.

However, this time, the voters chose their own Senator, not one buoyed by a bunch of Democratic “Carpetbaggers” who didn’t even live in the Magnolia State, much less give a darn about its citizens.

President Trump, as he had been already doing during his MAGA Rallies before the Midterm Election, reminded Mississippi Voters of the reason why they needed to prevent another Washington Insider from going up to the Capitol on their behalf.

He also reminded all of us down here why we voted for him.

Trump does not use flowery phrasing. Nor does he speak in platitudes while employing circuitous logic to attempt to make a point.

He simply tells it like it is, speaking to Americans as a friend would, not as a scolding martinet of a teacher, as the Democrats do.

Last night was a great night for Mississippi.