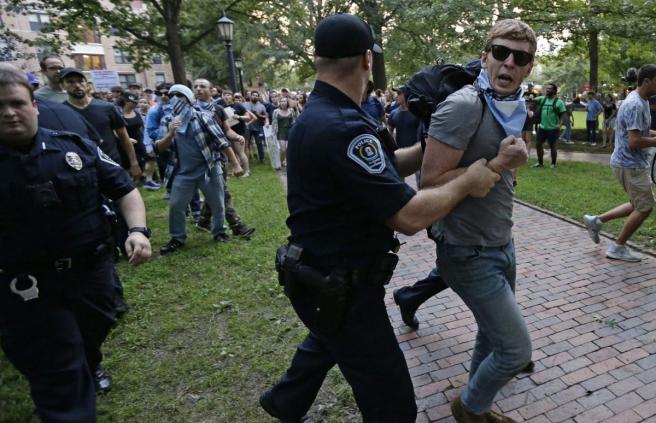 We are not interested in the good of others; we are interested solely in power, pure power. What pure power means you will understand presently. We are different from the oligarchies of the past in that we know what we are doing. All the others, even those who resembled ourselves, were cowards and hypocrites. The German Nazis and the Russian Communists came very close to us in their methods, but they never had the courage to recognize their own motives. They pretended, perhaps they even believed, that they had seized power unwillingly and for a limited time, and that just around the corner there lay a paradise where human beings would be free and equal. We are not like that. We know that no one ever seizes power with the intention of relinquishing it. Power is not a means; it is an end. One does not establish a dictatorship in order to safeguard a revolution; one makes the revolution in order to establish the dictatorship. – George Orwell, “1984”

At least seven people have been arrested as opposing groups clashed at the University of North Carolina Saturday over a century-old Confederate statue that was torn down earlier this week.

One person was recorded by the station stomping on a Confederate flag and then being led away by police.

Protesters gathered at the spot where the statue was torn down and held signs and chanted “racists go home,” according to the station. Several other people in support of the statue were seen holding Confederate flags.

“Silent Sam shouldn’t go back up,” Manning was quoted as saying.

Charges were filed Friday against three people cops say played some part in tearing down the statue.

Hundreds of student protesters gathered at the UNC campus in Chapel Hill Monday night to bring down the statue known as “Silent Sam.”

Using ropes and violent force, the protesters toppled the statute which had stood that ground since 1913.

“That Confederate monument has been a flashpoint and a divisive symbol for decades, and especially since Charlottesville, has been the focus of increasing frustration, anxiety and pain for people,” Chancellor Carol Folt said Thursday, according to the paper.

But Folt added: “No matter what you felt about the monument, what happened on Monday night was destruction of state property, and that is not lawful, and someone could have been badly injured. Using the full breadth of state and university processes, we will do our best to identify, and will hold those responsible accountable.”

The statue was under constant and costly police surveillance after being vandalized in recent months. Many students, faculty and alumni argued that “Silent Sam” symbolized racism and asked officials to take it down.

Since before the 2016 President Election, I have referred to those who want to be known as “The Resistance” as “The New Bolsheviks” because of the striking similarity of their actions to the ruthless aggression displayed by those who followed Vladimir Lenin in the Russian Revolution of 1918.

However, there is another group that these “brave new radicals” remind me of: the barbarians of Islamic State, or ISIS.

When they would take over a city in the Middle East, for example Palmyra, one of the first things that they would do would be to tear down the area’s historical sites, destroying any artifacts and antiquities which they did not like, in order to establish that their culture was supreme, just as Lenin’s Bolsheviks did.

“The Resistance” or protestors, if you will, who are bringing down these historical statues which have stood unmolested for over 100 years, also proclaim their self-righteousness through their actions.

As an American, I see nothing different from their actions than those of the Bolsheviks and the Radical Islamists of ISIS.

The subjects of the statues in question were Americans. Most of them were West Point Graduates who proudly served their country before the War Between the States.

The Civil War was a seminal moment in American History.

If you find the statues offensive, then that is your prerogative as an American. However, your hurt feelings do not give you just cause to attempt to erase history by pulling down a statue which is not your property.

History cannot be hidden, nor can it be changed through violent acts in the present. It just is.

Those statues were put in place so that Americans might learn about those historical figures and learn FROM them, as well.

And that brings me to very important point: Lenin’s Bolsheviks and ISIS also destroyed historical artifacts in order to make the populace “malleable” and “agreeable”.

Without their history there to remind them through statues, buildings and antiquities, the populace would lose their sense of “country”, not to mention knowledge of how their nation had evolved and changed into what they had become comfortable with.

These New Bolsheviks who are committing these acts of historical vandalism do not understand that in order to be properly educated as an American Citizen, you need to be aware of our Sovereign Nation’s History and reminded of it constantly, the good and the bad, so that our nation does not lose our cherished liberty which was bought by the blood of those before us.

So why, all of a sudden are these statues, which have been standing for so long, so offensive?

Perhaps because they stand in the way of those who would replace our Constitutional Republic with a Marxist form of government…like “Democratic Socialism”.

After all, those with a proper knowledge of history would not make very good “useful idiots”.