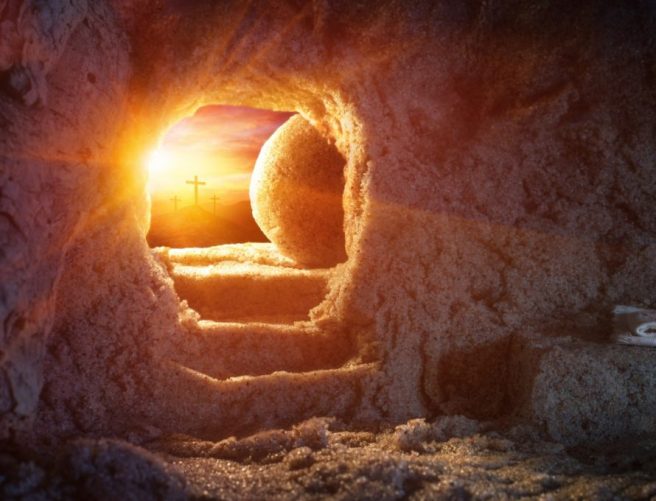 This morning, as I lay in bed, The Lord had me thinking about Him. These thoughts were about what today, a day that Christians around the world celebrate as the day that Jesus Christ rose victorious from the grave, must have been like.

Pretend for a moment, that you are an average citizen living at the time of Christ…

[For the past three years, you have seen this charismatic young man speak about the love and mercy of God, and how His Grace and Forgiveness is freely given, IF…

And, there’s the catch…

According to this carpenter’s son from Nazareth, you have to confess your sins, and ask the Great I am, for forgiveness.

Whoa! Wait a minute. Who is this guy? A radical? Ask Yahweh for forgiveness. And, what’s that he said? You will then have a personal relationship with His Father?

How can that be? This is the Great I am. This is the Deity of Vengeance who destroyed those escaped slaves from Egypt for throwing a party, while Moses was up on a mountain, and building and worshiping a Golden Calf.

And, remember what happened to King Nebuchadnezzar? Daniel interpreted a dream for him, explaining that his kingdom would be ruled over by Gentiles until God sent His King. Ol’ Nebby got mad, because he couldn’t rule over the Israelites and over the whole world unless God allowed him to do so. He forgot that, and became very proud. He tried to make the people think that he was very wonderful, and that they should worship him. He didn’t trust God as some of the kings of the Israelites did, but had the very foolish idea that he could be a wise and wonderful king without any help from God.

So, what do you suppose occurred?

Why, the King had another dream, and when he found out what it meant it was really terrible. In this dream God told him that he would lose his mind and would go out in the field and eat grass just like the cattle for seven years. And Nebuchadnezzar actually did this, too. Can you imagine a mighty king, as he thought himself to be, crawling around on the ground eating grass? The Bible tells us that his hair grew long and coarse and looked like bird feathers, and his fingernails became like the claws of animals.

Finally, though, Nebuchadnezzar’s reason returned to him, and when he found out what he had done he was very much ashamed of himself. However, he learned by this experience that he was not as wise and powerful as he had thought. Learning this, he gave praise to God for allowing him to be the ruler.

This is the God that the guy from Nazareth is telling us that we can have a personal relationship with?

I have noticed that while he is hanging there the guards and some of the townspeople there are mocking Jesus, telling him that if he is the Son of God, to ”jump down off of that cross”. Meanwhile,  some of the centurions are casting lots over his robe.

All except this one centurion, who is just watching Him, as if he is waiting for something to happen…]

And, then came the Glorious Morning…

[Wow. It’s really been amazing around here since they crucified Jesus. Did you feel that earthquake? The veil of the temple was torn in half! And did you hear? A bunch of people that had died years ago, were seen walking around the city! But that’s not all. Don’t tell me you haven’t heard?

Listen to this: He has risen! He arose from the dead and was seen by several people. It’s true! I know it sounds unbelievable. I can scarcely take it in myself. Mary Magdalene and Mary, James and Salome’s mother, went to the tomb to perform the anointing of His body and it wasn’t there! On top of that, there was this young guy there, dressed in a white robe. They said he must have been 9 feet tall. He said, “You are seeking Jesus of Nazareth. Why do you seek the living among the dead? He is not here. See the place where you laid him.” So they went and told the disciples. But you know how Peter is. He just had to go run up there and see for himself.

Jesus even approached two of them on the road to Emmaus. They didn’t recognize him. He even broke bread with them that night. They realized who He was and He disappeared! They ran to tell the disciples and as they were telling them, Jesus appeared right in front of them! They were all starting to panic. Jesus said, “Peace to you.” But they couldn’t believe it was him, especially Thomas. So he had him touch him in the hole in his hand where they drove the nail and where the spear pierced his side.

Jesus ate with them and performed other signs and miracles in front of them and they understood scripture as never before. He also came to them at the Sea of Tiberius. Peter took the disciples fishing and they weren’t catching anything. Jesus told them from the bank to cast the net down on the right side. They did, and they could hardly bring it in the boat! When they got back to land, Jesus already had a fire going and some fish and bread ready to eat. He asked Peter three times if he loved Him, and each time He told him “Feed my sheep’. Hey, isn’t that the same number of times Peter Denied Him?

Anyway, He taught them many things before He left. They watched as He was taken straight up into heaven. Can you imagine?

The disciples are making plans now to go out and starting spreading the Good News about Jesus’ Resurrection. They are talking about going out in pairs. Man. Nothing is ever going to be the same again.]

The despair being felt by the average citizens of Rome, at the time, is not unlike the situation which we, as average Christian Americans, find ourselves in today.

We, too, are still struggling in the darkness before the dawn.

Our American Culture has been crumbling before our very eyes, as sin, depravity, and personal irresponsibility have been lauded by “the smartest people in the room” as normal, and values to be embraced…a Golden Calf to be worshiped by those who have turned their backs of the Almighty, because He will not give them the worldly gratification they seek…and because they erroneously believe that they are smarter than God, and can interpret and ignore God’s Holy Word in order to ignore and to rewrite to make it mean whatever they want to, in order to assuage their own consciousness, in an attempt to stifle that “Still Small Voice” within them, Who is reminding them of their sin and the consequences of it.

This week as American families draw together in worship, we join with millions upon millions of others around the world also celebrating the traditions of their faiths. During these days, at least, regardless of nationality, religion, or race, we are united by faith in God, and the barriers between us seem less significant.

Observing the rites of Passover and Easter, we’re linked in time to the ancient origins of our values and to the unborn generations who will still celebrate them long after we’re gone. As Paul explained in his Epistle to the Ephesians, “He came and preached peace to you who were far away and peace to those who were near. So then you were no longer strangers and aliens, but you were fellow citizens of God’s household.”

This is a time of hope and peace, when our spirits are filled and lifted. It’s a time when we give thanks for our blessings-chief among them, freedom, peace, and the promise of eternal life.

This week Jewish families and friends have been celebrating Passover, a tradition rich in symbolism and meaning. Its observance reminds all of us that the struggle for freedom and the battle against oppression waged by Jews since ancient times is one shared by people everywhere. And Christians have been commemorating the last momentous days leading to the crucifixion of Jesus 1,950 years ago. Tomorrow, as morning spreads around the planet, we’ll celebrate the triumph of life over death, the Resurrection of Jesus. Both observances tell of sacrifice and pain but also of hope and triumph.

As we look around us today, we still find human pain and suffering, but we also see it answered with individual courage and spirit, strengthened by faith. For example, the brave Polish people, despite the oppression of a godless tyranny, still cling to their faith and their belief in freedom. Shortly after Palm Sunday Mass this week, Lech Walesa faced a cheering crowd of workers outside a Gdansk church. He held his hand up in a sign of victory and predicted, “The time will come when we will win.”

We are never defeated unless we give up on God.

Fellow Christian Americans….my message to you on this Resurrection Day 2018 is

As the old country Preacher’s wife always told him,

Hold on to your fork, Hon. Dessert is on it’s way.

The final chapter of the amazing story of our Blessed Land has not been written yet. It is up to each and every one of us to write it, strengthened by the Grace of God.

“For God so loved the word, that he gave his only begotten son, that whosoever believeth in him should not perish, but have everlasting life.” – John 3:16

He is risen indeed!

One thought on “He is Risen! Resurrection Day 2018”