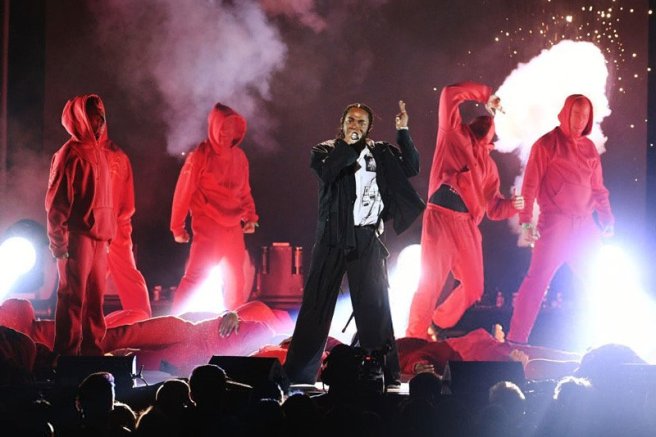 Can music also bring out the worst in mankind, as well?

On Thanksgiving Day, as I was watching the Macy’s Parade with my family, I suddenly realized that I did not know any of the performers lip syncing their songs on the floats, Additionally, I heard at least one song that was entirely inappropriate for that family-friendly, nationally-televised event.

What is going on with Pop Music?

It appears to this crazy ol’ cracka that to make it in the music industry today, if you’re a woman, wear something in public that looks like you just threw it on…and dang near missed. and, if you’re a man, you have to flit around the stage as if you’re “light in the loafers”…or a Mick Jagger Wannabe…who never will be.

But, most of all., if you want to make it in today’s Music Industry, you have to be a member of the Hive Mind known as Modern American Liberalism.

Those in power in the Music Industry, like the rest of Liberal America’s “Smartest People in the Room”, seem to be under the misguided notion that the majority of Americans think precisely like them, meaning that we all are as dedicated to hating the 45th President of the United States of America as Captain Queeq (Humphrey Bogart in “The Caine Mutiny”) was in his search for the missing strawberries.

I don’t know if their unrequited anguish over the events of November 8, 2016 has eroded their memories, or just plain sent them over the edge of sanity. However, they seem to remain oblivious of the fact that 30 states voted for Donald J. Trump on that fateful night.

Don’t believe me? Then you weren’t watching the Grammy Awards last night.

And, if you have any taste in music or love for our country at all…you probably weren’t.

At the 60th annual Grammy Awards the stars took the opportunity to voice their opinions on everything from President Trump to DACA and gender equality.

He was then joined by U2 for their collaboration “American Soul,” which begins with the lyrics, “It’s not a place/This country is to me a sound.”

Their performances featured a planned interruption from comedian Dave Chappelle, who won the award for Best Comedy Album for “The Age of Spin & Deep In The Heart of Texas.”

“I just wanted to remind the audience that the only thing more frightening than watching a black man be honest in America is being an honest black man in America,” Chappelle said before kicking things back to the stage.

Kendrick Lamar (left, rear, in white shirt) performs a medley in front of an American flag at the 60th Annual Grammy Awards on Jan. 28, 2018. (Reuters)
The Edge took the stage with Lamar as well. From there, more political imagery took center-stage when Lamar’s chorus of backup dancers, now dressed in red, began falling to the floor as the sound of gunshots and flares rang out on stage.

After some brief words from host James orden, Lamar ended up taking home the first win of the night, Best Rap/Sung Performance, where he took his time to thank Rihanna for her collaboration. After that, the night of performances kicked off in a big way with Lady Gaga singing the first solo performance of the night followed quickly by Sam Smith’s “Pray.”

“It’s a really crazy accomplishment,” she told reporters backstage, still reeling from the win. “None of this feels real to be honest.”

Comedian Sarah Silverman, who was also nominated for Best Comedy Album, didn’t disappoint while introducing Luis Fonsi and Daddy Yankee singing “Despacito.” She took the stage with Victor Cruz joking that they were there to encourage everyone to vote.

“Do what you want to do, the world is basically over anyway,” she said.

Later in the evening, Lamar took home yet another award for Best Rap Album for “DAMN.” In his speech, he thanked those who came before him and dedicated the win to hip-hop in general. Before leaving the stage, he declared “Jay for president,” referencing Jay-Z.

Before Katie Holmes introduced Bruno Mars and Cardi B for a performance of “Finesse,” Corden appeared in a pre-taped segment meant to put a New York City spin on the hit “Carpool Karaoke” segment in which he, Sting and Shaggy attempted to sing their hits on the subway, much to the chagrin of their fellow passengers. The staged bit ended with an angry man punching Corden in the face for his attempt to manufacture a viral hit.

After the performance, the host of “The Daily Show,” Trevor Noah, came out to present Chappelle as the winner of Best Comedy Album. First, however, he had to showcase his trademark political humor.

“I love that song,” he said. “It takes me back, way back, to when Trump wasn’t president.”

Shaggy seemed to ad-lib a line about being a legal Jamaican immigrant in New York as well.

Following the announcement of Christ Stapleton as the winner of Best Country Album, things took a somber turn. Brothers Osbourne, Eric Church and Maren Morris took the stage to sing a song in honor of the victims of the tragic shooting at the Route 91 Harvest Festival in Las Vegas as well as the bombing at an Arianna Grande concert in Manchester, England.

Church opened the dialogue with a few words about the healing power of music followed by a touching, albeit hard-to-hear, tribute from Morris.

“A few months earlier and a continent away the same was true in Manchester, England. The painful truth is that this year in just those two events, 81 music lovers, just like us, went out to a night of music and never came home,” she said through some audio technical difficulties. “So, tonight, to honor those we lost, Eric, Brothers Osbourne and I, who all performed in Las Vegas that tragic weekend, want to come together and honor the memory of those music-loving souls so cruelly taken from us.”

Things didn’t let up from there as Jenelle Monae took the stage to give an impassioned introduce to a performance of “Pray” from Kesha, Cyndi Lauper, Camila Cabello, Julia Michaels, Bebe Rexha and Andra Day.

Kesha, who earned her first pair of Grammy nominations for an album reflecting her battle with former producer and mentor Dr. Luke, paid tribute to victims of sexual assault and highlighted the #MeToo and Time’s Up movements, which many in attendance were publicly supporting as well.

“We say time’s up for pay equality… times’ up for harassment of any kind. It’s not just going on in Hollywood, its not just going on in Washington. It’s going on right here in our industry,” Monae said. “We have the power to undo the culture that does not serve us well. So, let’s work together women and men as a united music industry committed to creating more safe work enviroments, equal pay and access for all woman.”

As soon as the performance was over, Cabello crossed the stage to make a plea in favor of Dreamers, the subject of the much-debated immigration debate happening in Washington D.C. over the repeal of DACA.

“I’m here on this stage tonight because, just like the dreamers, my parents brought me to this country with nothing in their pockets but hope. They showed me what it means to work twice as hard and never give up. And, honestly, no part of my journey is any different from theirs. I’m a proud Cuban-Mexican immigrant, born in Eastern Havana, standing in front of you on the Grammys stage in New York City,” she said to applause from the crowd. “And all I know is, just like dreams, these kids can’t be forgotten and are worth fighting for.”

The star then introduced U2, who appeared underneath the Statue of Liberty to perform their song “Get Out Of Your Own Way.”

I remember the summer after I graduated college in December 1980. I bought a brand new 1981 Mazda GLC, had a Pioneer Tape Deck installed to play in all four hidden door speakers (a big thing back then), bought a cassette tape of “The Beatles Love Songs”, and played it until the tape broke.

Music has always affected my life and played a major part. I sang in church choirs, leading services, singing in quartets, and solo, for over 30 years and have played acoustic rhythm guitar since the age of 19…a long time ago.

Music can indeed soothe us. It can inspire us…in both good ways and in bad.

It has the power to bring us to our knees in worship of the Living God…or make our hands “clench in fisteous rage” (American Pie, Don Mclean)

It can advise us to “treat her like a lady” or find us hanging out, “down on Main Street”.

At this time in our country’s history, when morality has become relative, ethics situational and a nation fractured through racial division and poor losers still upset over the 2016 Presidential Election’s Outcome, we find our souls crying out for soothing Music. Positive music which will lift up our spirits and bring a smile to our faces as we drive to work, giving us an earworm for the rest of the day,

Instead, we find Pop Music and “so-called” Country Music, actually manufactured in New York City (pronounced like they do in the Pace Salsa Commercials), advocating meaningless one-night stands and encouraging the debasement of the human soul, instead of its ability to rise above any obstacle in its path that might hinder individual achievement.

The producers of the Grammy Awards, it appears, could care less about what viewers in the Heartland of American want to see and hear. Like the oblivious NFL Players, they decided to use their entertainment platform as a political launching pad for diatribes against the American President and those of us who voted for him.

While, like Hillary Clinton herself, vitriol and insults hurled incessantly at the President during an awards show may enthrall the “culturally hip” audiences on the East and Left Coasts, here in the Heartland, a television program so weak that it relies on Liberal diatribes against a sitting President of the United States of America to “entertain” their audience will have Americans turned off faster than Rosie O’Donnell in a thong bikini.

For a pertinent example, consider the revival of “Will and Grace”.

Is it any wonder that the legends of pop and country music such as Billy Joel, Reba McEntire, Brooks and Dunn, Elton John, and Sir Paul McCartney are still selling out arenas?

With all of today’s over-produced, under-written Pop and Country-Pop Music flooding the airwaves of both broadcast and satellite radio, Americans my age wonder where all the great songwriters have gone to?

Where are the “Good Vibrations” that the young people of this generation so desperately need?

Evidently, even though “We Didn’t Start The Fire”, we have left them “Sittin’ On The Dock of The Bay”.