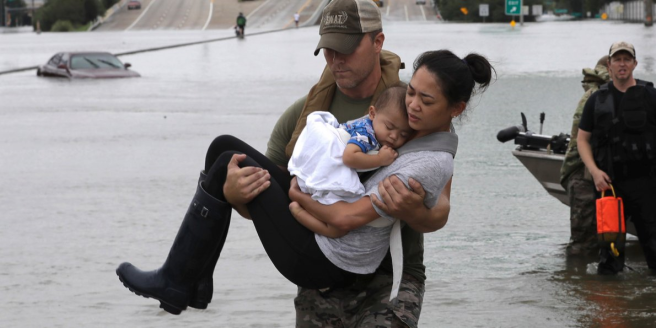 “When the road looks rough ahead, remember the ‘Man Upstairs’ and the word H-O-P-E. Hang onto both and ‘tough it out.'” – John Wayne

A visiting University of Tampa professor of sociology was fired Tuesday after he suggested in a tweet Sunday that Texans deserved Hurricane Harvey because of their support for President Donald Trump in the 2016 election.

University spokesman Eric Cardenas said in a statement that Kenneth Storey was fired after the school weathered an outpouring of online outrage over the comments.

Officials said other faculty in the sociology department would take over Storey’s classes.

“We condemn the comments and the sentiment behind them, and understand the pain this irresponsible act has caused,” the school said in a statement to The University of Tampa community. “As Floridians, we are well aware of the destruction and suffering associated with tropical weather. Our thoughts and prayers are with all impacted by Hurricane Harvey.”

Storey tweeted Sunday: “I don’t believe in instant Karma but this kinda feels like it for Texas,” according to Campus Reform. “Hopefully this will help them realize the GOP doesn’t care about them.”

Responding to a commenter who pushed back on the tweet, Storey reportedly wrote: “Well, the good people there need to do more to stop the evil their state pushes. I’m only blaming those who support the GOP there.”

The commenter asked Storey if Trump supporters in Florida deserved a similar fate.

“Yep, those who voted for him here deserve it as well.”

After the tweet started to make waves on social media, the professor tweeted Monday afternoon: “I deeply regret a statement I posted yesterday. I never meant to wish ill will upon any group. I hope all affected by Harvey recover quickly.”

He ultimately deleted the original tweet, according to Campus Reform.

Harvey has been blamed for as many as 15 deaths including six family members who were believed to have drowned when their van was swept away by floodwaters.

The storm has dumped more than 30 inches of rain in parts of Texas and crews have rescued thousands of people left stranded by the storm.

Waving the Texas flag, President Trump vowed Tuesday to help storm-stricken residents get back on their feet as he surveyed the damage on the ground from Hurricane Harvey and predicted a recovery effort “better than ever before.”

The president’s trip to Texas Tuesday was mostly dedicated to meetings with local officials and emergency responders.

But, stepping outside a Corpus Christi fire station, he paused from the formal briefings to try and boost the spirits of Texans who have spent days salvaging their belongings, searching for loved ones and getting to dry land while they wait out the flood.

Standing between two fire trucks, Trump told a crowd that had gathered outside, “We are here to take care of you.”

“We’re going to get you back and operating immediately,” Trump said, before holding up a large Texas state flag.

“We want to do it better than ever before,” Trump said of the recovery. “We want to be looked at in five years or ten years from now as this is the way to do it.”

Speaking of the storm, the president said: “This was of epic proportion. Nobody has ever seen anything like this.”

“We want him to see and understand the enormous challenges that Texans have faced and the need for the aid that he’s providing,” Abbott told reporters as the president’s plane landed.

On Tuesday afternoon, the president left Corpus Christi and flew to Austin, where he visited the Texas Department of Safety Emergency Operations Center and praised the work of its employees.

“The world is watching and the world is really impressed with what you are doing,” Trump said.

Speaking with state officials, the president said he’d be “working with Congress” on relief funds but acknowledged it would be a “costly proposition.”

“There’s probably never been something so expensive in our country’s history,” Trump said.

Abbott, a Republican, commended Trump for his response to the storm.

“Behind the scenes, the president has shown character and compassion,” Abbott said. “He helped get Texas prepared.”

Speaking to reporters on Air Force One during the flight to Texas, Sarah Sanders, the White House press secretary, said the intention of Tuesday’s trip was to “lay the foundation for what we know will be a long recovery effort.”

On his nationally syndicated radio program yesterday, Rush Limbaugh was talking to a caller about the way that the Main Stream Media distorts things, when he said,

I don’t think that Antifa represents a majority of America..

…I don’t think the Southern Poverty Law Center is anywhere close to representing a majority of America. The left isn’t the majority of this country. But yet the media makes it look like they are.

We have all seen the videos and photographic images of the way that average Americans like you and me have been helping to provide both rescues and relief to the cities of Houston and the other areas in Texas and Louisiana which have been affected by Hurricane Harvey so far.

Numerous Christian Organizations, such as the Salvation Army, Franklin Graham’s Samaritan Purse, and the Southern Baptists are all down in the ravaged areas providing supplies and assistance in whatever ways they can.

Meanwhile, where has Antifa, BLM, the SPLC, the Women’s March, Color of Change, and all of the other Soros-sponsored “non-profit” organizations been, who claim to care so much about “the people of America” and who claim to want to “make things better”?

Like the followers of Karl Marx who preceded them in advocating for a Social Utopia, they are nothing but self-centered sycophants blindly following a failed political philosophy, whose strings are being pulled by a profiting puppet master with Machiavellian Political Ambitions.

That brave Houston Police Officer who drowned in his car on the way to help others after telling his wife when he left their home, “I’ve got work to do.” was worth more than all of the spoiled rotten Pajama Boys and Girls in the before-mentioned organizations combined.

Hey, ex-professor…you want to know what kind of Americans voted for Trump?

Look at the heroes of Hurricane Harvey.

Perhaps then, you will have a clue.

But, I seriously doubt it.