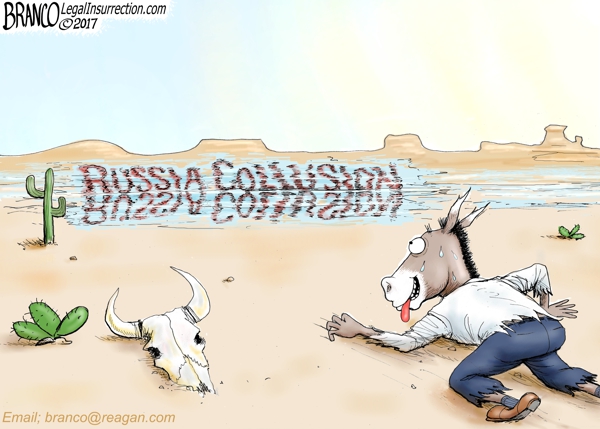 The trouble with our Liberal friends is not that they’re ignorant; it’s just that they know so much that isn’t so. – Ronald Reagan

Professor Jonathan Turley said the president’s critics are so eager to “bag a Trump” that their hunt extends the definition of a crime “well beyond its legal moorings.”

Martha MacCallum reported the latest source of Trump criticism is a previously undisclosed meeting between the president and Vladimir Putin at a German dinner.

However, the White House responded by saying Trump got up from his seat to approach his wife who was assigned a seat next to Putin and his translator.

Trump apparently spoke with the trio for some time.

Turley, of George Washington University in Foggy Bottom, D.C., said Trump critics “reflect a level of hyperventilation we have in Washington now.”

He said that collusion on its own is not a crime, but that any conspiracy involved might be.

Turley said that people will not like a world where “treason” is more broadly defined in that way.

He said that Trump has been accused of committing crimes, despite his alleged actions falling well short of what separates a crime from a political faux pais.

“People are so eager to bag a Trump that they are willing to take these crimes and take them well beyond their legal moorings,” he said.

On July 11th, Alan M. Dershowitz, Felix Frankfurter Professor of Law, Emeritus and author of Taking the Stand: My Life in the Law and Electile Dysfunction, wrote the following op ed for foxnews.com…

Special Counsel Robert Mueller will surely be looking into the meeting between Donald Trump, Jr., and a Russian lawyer named Natalia Veselnitskaya.  Part of the meeting was also attended by Jared Kushner, the president’s son-in-law, and Paul Manafort, who at the time was running Trump’s campaign.  It now seems clear from the emails that the Trump people went to the meeting expecting to be given dirt on Hillary Clinton from the Russian government.  The question remains, if this is all true, is it criminal?

Obviously if anyone conspired in advance with another to commit a crime – such as hacking the DNC – that would be criminal. But merely seeking to obtain the work product of a prior hack would be no more criminal than a newspaper publishing the work product of thefts such as the Pentagon Papers and the material stolen by Snowden and Manning.   Moreover, the emails sent to Trump Jr. say that the dirt peddled by Veselnitskaya came from “official documents.”  No mention is made of hacking or other illegal activities. So it is unlikely that attendance at the meeting violated any criminal statute.

Perhaps mere collusion by a campaign with a foreign government should be made a crime, so as to prevent future contamination of our elections. But it is not currently a crime.

Whether or not such collusion, if it occurred, is a crime, it is clear that the American people have the right to know whether any sort of collusion –legal or illegal – took place.  And, if so, what was its nature.

The Mueller investigation is limited to possible criminal activity.  Probing the moral, political or other non-criminal implications of collusion with, or interference by, Russia is beyond the jurisdiction of the special counsel.  It is the role of Congress, not the Criminal Division of the Justice Department, to make changes in existing laws.  Perhaps mere collusion by a campaign with a foreign government should be made a crime, so as to prevent future contamination of our elections.  But it is not currently a crime.

Nor will it be easy to draft a criminal statute prohibiting a campaign from using material provided by a foreign power, without trenching on the constitutional rights of candidates.  But this is all up to Congress and the courts, not the special counsel, with his limited jurisdiction.

That is why the entire issue of alleged collusion with, and interference by, the Russians should be investigated openly by an independent nonpartisan commission, rather than by a prosecutor behind the closed doors of a grand jury.

The end result of a secret grand jury investigation will be an up or down determination whether to indict or not to indict.  If there are no indictments, that will end the matter. The special counsel may issue a report summarizing the results of his investigation, but many experts believe that such reports are improper, since the subjects of the investigation do not have the right to present exculpatory evidence to the grand jury, which typically hears only one side of the case. Beyond any report, there will also be selective leaks, such as the many that have already occurred.  Leaks, too, tend to be one-sided and agenda driven.

A public non-partisan commission investigation, or even one conducted by partisans in Congress, would be open for the most part.  They would hear all sides of the story, and the public would be able to judge for itself whether there was improper collusion.  A commission or Congressional committee could also recommend changes in the law for the future.

The American people need to know precisely what the Russians tried to do and did – and what, if anything, the Trump campaign knew and did.  These issues go beyond a cops-and-robber whodunit. They involve the very essence of our democracy.

It is quite refreshing to read the writings of a level-headed Liberal for a change.

All average Americans, like you and me, see on Liberal-produced television newscasts or read in Liberal-written newspapers or magazines, are attacks on President Trump, which feature all of the common sense and objective level-headedness of Bobcat Goldthwait.

As I have noted numerous times in the last seven months, Modern American Liberals are throwing an unending National Temper Tantrum over the loss of Hillary Clinton to American Businessman and Entrepreneur Donald J. Trump in the 2016 Presidential Election.

The other factor, besides this ongoing temper tantrum, which has led to the Liberals proclaiming criminal activity on behalf of President Trump and his son when there is none, is the fact that Liberals lead their lives in a state of perpetual confusion.

Elizabeth Warren is an American Indian.

Al Sharpton is a Reverend.

Al Gore is a scientist.

George Stephanopoulos is a journalist.

And, somehow, someway, if they could get rid of Trump, Hillary Clinton would be given the Presidency.

Heck. Hillary’s husband, Bubba, doesn’t even know what the definition of “is”, is.

The good news is that while the Democrat Party, their Propaganda Arm, the MSM, and their Social Media Operatives continue to sound like Jan Brady, screaming

…their whining is falling on deaf ears.

A new poll released by left-leaning Bloomberg proves what most Americans have been saying for months; the nation is facing some big problems, and the Russia-Trump conspiracy theory isn’t one of them.

The survey, conducted last week and released on Tuesday, shows that just 6% of American voters think allegations of Russian collusion in the 2016 general election is a major issue facing the nation.

Individuals were asked “Which of the following do you see as the most important issue facing the nation right now?” Healthcare reform was at the top of the list with 35% of Americans seeing at is the largest problem in the US, followed by unemployment at 13%; terrorism at 11%; and immigration at 10%.

Near the bottom was the “Relationship with Russia” with just 6%.

The poll flies in the face of non-stop media coverage of the Russian-Trump witch hunt that has dominated headlines for over a year.

The survey also highlighted other positive development for the Trump administration, mostly regarding the President’s performance on jobs and the economy.

“The latest Bloomberg National Poll shows 58 percent of Americans believe they’re moving closer to realizing their own career and financial aspirations, tied for the highest recorded in the poll since the question was first asked in February 2013,” said the report.

Just like adults engaging in a conversation tune out a loud, bratty child who keeps trying to interrupt them to call attention to themselves, so are average Americans tuning out those intent on pushing the “Trump/Russia Collusion Fake News Fairy Tale”.

Average Americans are more concerned about adult matters, like feeding our families, keeping or finding jobs, the future of our children and grandchildren…