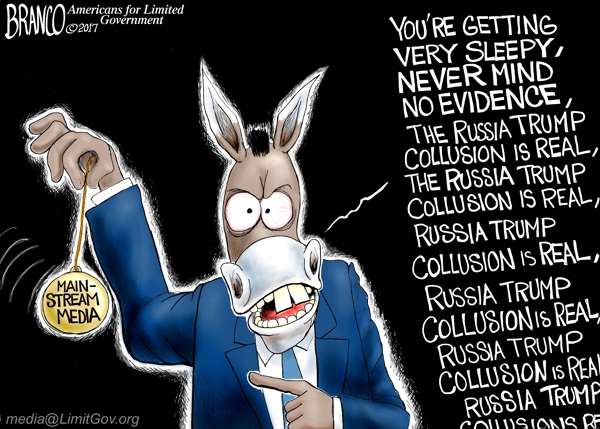 “Well, the trouble with our liberal friends is not that they are ignorant, but that they know so much that isn’t so. “- Ronald Reagan, “A Time For Choosing”, 1964

Democrats acknowledged Wednesday that their anti-Trump campaign message has failed to connect with voters this year in the wake of two more party losses in House special elections.

Voters “want us to focus on jobs and the economy,” Illinois Democratic Rep. Cheri Bustos told Fox News’ “Happening Now” on Wednesday. “I get almost no questions about Russia. I get no recommendations that I [should] support impeachment.  … All of the other sideshows are not what people want us to focus on.”

The moment of reflection comes after Republican Karen Handel defeated Jon Ossoff in Georgia’s closely watched House runoff, despite millions in out-of-state donations pouring into his campaign amid Democratic hopes that an Ossoff win would deliver a rebuke to President Trump.

Instead, Republicans cited Handel’s win as a rebuke to Democratic “obstruction.”

Democrats had entered the 2017 special elections expecting to ride the wave of opposition to Trump – hoping his low approval ratings, popular-vote loss and now-persistent allegations his campaign team colluded with Russians to influence the election would translate to Democratic support at the polls.

However, Democrats have lost all four House races so far this year where they sought to flip a Republican-held seat.

Georgia’s race marked their highest-profile defeat, in what became the costliest-ever House election.

The campaigns and outside groups combined to spend over $50 million. In terms of individual donations, Ossoff vastly outpaced Handel, with nearly $24 million to her $4.5 million — though Handel was boosted by outside groups.

The other two races this year where Democrats failed to turn a seat from red to blue were in Kansas and Montana — with their last chance coming Aug. 15 for the Utah seat of outgoing Rep. Jason Chaffetz.

Bustos was not the only Democrat to lament the conditions of the party in the wake of Tuesday’s losses.

As the final returns in Georgia’s 6th Congressional District were tallied, Massachusetts Rep. Seth Moulton tweeted the loss “better be a wakeup call” for Democrats.

“Business as usual isn’t working. Time to stop rehashing 2016 and talk about the future,” he continued in a series of tweets that within minutes became post-election news. “We need a genuinely new message, a serious jobs plan that reaches all Americans and a bigger tent, not a smaller one. Focus on the future.”

The New York lawmaker said he also was “disappointed” and the party would evaluate the results of all 2017 races and have a “healthy debate” in which members will “have an opportunity to express their concerns.”

To the question of whether Democrats had focused too much on Trump and national issues, Crowley said the party’s 2018 strategy to win control of the House by taking 24 GOP-held seats would include a mix of national and local issues.

“We can walk and chew gum at the same time,” he said.

Ohio Democratic Rep. Tim Ryan, who unsuccessfully challenged Nancy Pelosi for her leadership post, was quoted in The New York Times saying, “Our brand is worse than Trump.”

Pelosi, meanwhile, remained upbeat – telling colleagues in a letter Wednesday, “The House was in play before the Georgia race. The House remains in play now.” She said Democrats will have to put forth their “message.”

While Democrats tried to tie Handel to Trump, Republicans linked Ossoff to House Minority Leader Pelosi — with TV ads and mailers featuring images of her and reminders about Ossoff’s campaign getting millions from wealthy East and West coast liberals like her.

“There are always questions about leadership. … That’s a reality of elections. It’s all of our responsibility,” she told Fox News’ “America’s News HQ,” amid renewed questions about Washington Democrats having failed to connect with working Americans.

David Payne, a Republican strategist and president of digital communications firm Codavate, said Wednesday that the parties were equally guilty of invoking Trump and Pelosi and that “local politics still reigns supreme.”

He pointed out that Ossoff eventually dumped the “Make Trump Furious” motto and made fiscally conservative promises like tax cuts for businesses in a district held by Republicans for nearly four decades.

Former House Speaker Newt Gingrich, who once held the Georgia seat in question, wrote on FoxNews.com, “For the Left this race had been portrayed as a referendum on Trump. After Trump’s tweets and robocalls, there was a verdict. Trump won.”

So, why doesn’t the Democratic Party understand why they continue to lose?

While spending time on Facebook Political Pages, which I really should cut down on, as it tends to increase my blood pressure to Mt. Vesuvius Levels, I continuously encounter individuals who echo the sentiments of the 44th President of the United States of America, Barack Hussein Obama, and the rest of the Far Left self-proclaimed geniuses who cost the Democratic Party the Presidency who believe that anybody who works hard for a living and believes in God and Country, is a Jingoistic imbecile.

For the past 8 years, children and young adults, attending American Institutes of Learning from kindergarten to college campuses have been taught by Liberal teachers and professors that America is “just another country” and to be a patriot is to somehow be close-minded, ignorant, and bigoted, not necessarily in that order.

Average Americans no sooner believe that Donald J. Trump colluded with the Russians to “fix” the Presidential Election than they do that the Main Stream Media is objective.

And that, boys and girls, is why the Liberals are still showing the world their posteriors while continuing to throw the longest mass temper tantrum in recorded history.

And, why they lost all of those special elections on Tuesday night.

It was an overestimation of their own intellect and an underestimation of the intelligence and unbridled love of average Americans for OUR COUNTRY, that cost the Democrats the Presidency and those Special Elections on Tuesday Night.

To be blunt, “The Smartest People in the Room”…SIMPLY AREN’T.

Their unbridled hatred for President Trump and, quite literally, all things American, has created an enormous disconnect between the Democratic Party and average Americans living in the Heartland.

So, to summarize, by labeling Patriotism as “Jingoism” and by ridiculing those of us who love our country and hold fast to Traditional American Values, the Democratic Party cost themselves the Presidency…going from the “In Crowd” to the Outhouse.

If I was a Modern American Liberal with any sort of self-awareness, I would be throwing a temper tantrum, too…over my own ungrateful arrogant ignorance that caused the defeat of  my Presidential Candidate and has just cost my party all of those Congressional Elections on Tuesday Night.

The Democrats just don’t get it.