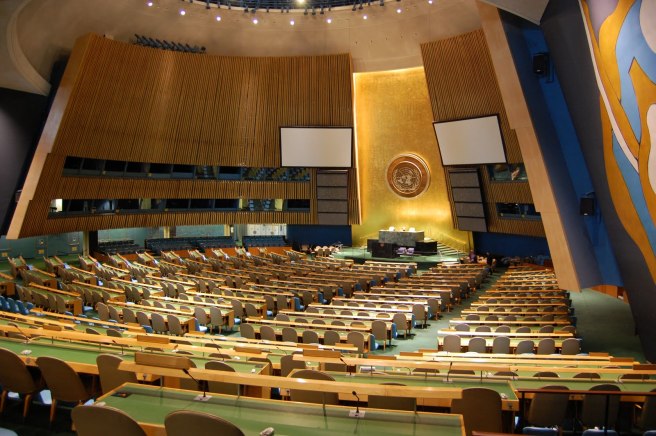 “When do you see the United Nations solving problems? They don’t. They cause problems. So, if it lives up to the potential, it’s a great thing. And if it doesn’t, it’s a waste of time and money.” – President Donald J. Trump

President Trump’s administration has told the State Department to cut more than 50 percent of U.S. funding to United Nations programs, Foreign Policy reported. The push for the drastic reductions comes as the White House is scheduled to release its 2018 topline budget proposal Thursday, which is expected to include a 37 percent cut to the State Department and U.S. Agency for International Development budgets.

It’s not clear if Trump’s budget plan, from the Office of Management and Budget, would reflect the full extent of Trump’s proposed cuts to the U.N.

Secretary of State Rex Tillerson has suggested phasing in the major reductions over the coming three years. One official close the administration told Foreign Policy that Tillerson has flexibility about how best to implement the reduction.

The U.S. spends roughly $10 billion annually on the U.N., and the cuts could have the greatest impact on peacekeeping, the U.N. development program and UNICEF, which are funded by State’s Bureau of International Organization Affairs.

The magazine said it confirmed the potential cuts with three sources; one said the administration is considering cutting humanitarian aid programs by 36 percent.

Richard Gowan, a U.N. expert at the European Council on Foreign Relations, said the alterations would spark “chaos” if true.

“[It would] leave a gaping hole that other big donors would struggle to fill,” he told FP, pointing to how the U.S. provided $1.5 billion of the U.N. refugee agency’s $4 billion budget last year.

“Multiply that across other humanitarian agencies like the World Food Programme and you are basically talking about the breakdown of the international humanitarian system as we know it.”

“There are rumors of big cuts to the State Department budget, but again, on our side, no figures,” one diplomat purportedly told donors from Europe, Japan and South Korea.

Trump has repeatedly vowed to strengthen the military before the release of the 2018 budget, which is the first such proposal of his presidency.

While Barack Hussein Obama held the Office of the President of the United States of America, he was bound and determined to make America into just another nation, assigning American Exceptionalism to the trash heap of  history. His pure ignorance to America’s place in the world was overwhelming. Obama’s bowing and scraping, like a leader of a country who occupied a subservient position to nations filled with barbarians, who would slit every American’s throat, if given the chance, was an stunning example of this naivete and downright ignorance.

After terrorists murdered four Americans at the US Embassy Compound in Benghazi, Libya, Obama stepped in front of the General Assembly of United Nations, like a little school boy, repeating the lie which he and his staff concocted, that it was some little unwatched Youtube Video that caused the Muslims’ actions over there.

We are not their servants. In fact, the United Nations would not exist if not for America.

Obama’s acquiescence to the United Nations emboldened that body to believe that THEY were our, forgive the term, “Masters”.

The United States of America is a Sovereign Nation, created by the blood, sweat, and tears of men and women, who rise above those who do not believe in American Exceptionalism and our Sovereignty as a Free Nation, in stature, honor, integrity, and courage to the point where those who are the enemies of our country, Foreign and DOMESTIC, are not even fit enough to tie their boots.

We are an “independent state”, completely independent and self-governing. We bow to no other country on God’s green Earth. We are beholden to no other nation. America stands on its own, with our own set of laws, the most important of which is The Constitution of the United States, which guarantees us, as a Free People, the right to determine our own destiny, both individually, and, as a free people.

We man up and we handle our own problems.

Only by standing up to the thug nations represented at the UN, will America be respected, and left alone, as the sovereign nation that we are.

Cutting the yearly payment of American Taxpayers’ Money to the United Nations by 50% is a good start.