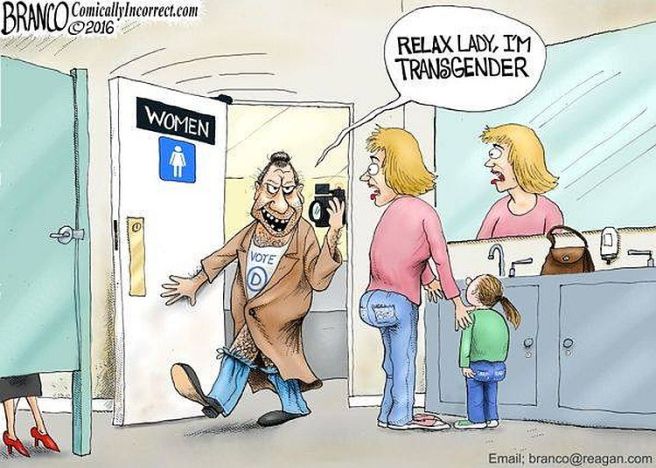 Americans, are once again, witnessing the “Tyranny of the Minority”.

Jillian T. Weiss, a professor of law and society at Ramapo College of New Jersey and founder of a firm that represents transgender people who have experienced discrimination, is executive director of the National Transgender Bar Association now in formation. The following is an excerpt of a colum tittled “Federal law dooms transgender bathroom bans’, which was published yesterday in USA Today.

North Carolina recently became the first U.S. state to mandate discrimination against transgender people by statute, banning them from using bathrooms and locker rooms that align with their gender identity in government buildings and schools. The new law also guts protections for lesbian, gay, bisexual and transgender people in Charlotte and nine other municipalities.

This move and similar ones in other states are terrible signals of intolerance, but beyond that they make absolutely no sense. North Carolina started feeling an economic backlash so quickly that Gov. Pat McCrory signed an executive order Tuesday in an attempt to soften the message sent by the law, though the order has little impact on the law itself.

Then there’s McCrory’s reason for overriding the municipal ordinances — that the city of Charlotte committed “government overreach and intrusion” by saying transgender customers of private businesses had the right to use whatever restroom seemed appropriate. That is in one sense a demand on those businesses. But looked at another way, McCrory was suggesting that Charlotte had overstepped its governmental role by reducing restrictions on restroom use. If this seems illogical to you, join the club.

What makes state laws like these even more irrational is that transgender people are currently protected by federal law. They are protected in their use of gender-conforming bathrooms in schools by Title IX of the Education Amendments of 1972. The Occupational Safety and Health Act and Title VII of the Civil Rights Act of 1964 have been interpreted to cover gender-appropriate restrooms in the workplace. There are constitutional provisions requiring equal protection of the law and a due process right to privacy that apply to state laws restricting access to public accommodations. And the Affordable Care Act protects people in medical facilities.

Even so, 44 bills targeting the LGBT community were introduced in state legislatures in the first three months of 2016. The Republican National Committee has called for these actions. These statewide attempts to make an end run around federal law, using irrational fear-mongering to vilify an already vulnerable population, have already resulted in a federal lawsuit in North Carolina.

Ever since the states of North Carolina and Mississippi passed laws effectively barring “transgendered” people from using public restrooms of the opposite “biological sex”, in support of traditional American Morals and Vales, there has been an epic attempt by “The Smartest and Most Tolerant People in the Room” to blackmail corporations into protesting the states’ efforts, through public proclamation of their displeasure with Americans in the Heartland standing up for themselves.

Exactly, how large is the “Transgendered Population” in the United States of America?

If you listen to those, including President Barack Hussein Obama and his Administration, who are fighting so fervently for “Transgendered Rights”, you would think that the percentage of our overall population MUST be somewhere in the double digits.

You would be wrong.

Transgendered Americans actually only number somewhere around 700,000, about 0.3 percent of U.S. adults.

I suppose that the “coming out” of Former Olympic Decathalon and Reality TV Star Bruce Jenner as her new Transgendered Persona, “Caitlyn”, started the snowball down the hill.

However, as I wrote in the time, I think that it could possibly be nothing but a publicity stunt, for two reasons.

I wonder if the sales of Wheaties suffered after his/her/its big announcement?

In researching today’s post, I found several articles in the Main Stream Media and Liberal websites, such as mediamatters.org, lauding how peaceful, wonderful, and harmless Transgendered People are, and how we “Right-wing Hatemongers” and our stated concern about the safety of our wives, girlfriends, and daughters is overblown.

Then, I found articles detailing the problems that American Prisons have been facing, for over 10 years, in dealing with the Transgendered Criminals, who are incarcerated in their facilities.

And, of course, the reports about perverts exposing themselves in public bathrooms, are common on every city’s Police Blotter.

Why the push to accommodate the “gender Identity” of .03 % of our population, while simultaneously disrespecting the privacy and advocating a threat to the safety of American women and children?

I propose to you, gentle reader, that this is a part of the continued effort to sublimate Traditional American Values, and even, American Exceptionalism, for the “Good of the State”, in Liberals/Progressives’ ongoing quest to bring America down to the same level as the Socialist Democrat Failures of Europe.

The other day, I had a fellow write attempt to justify these multiple-stall “Unisex” Public Restrooms as being “normal”, because “Europe has had them for years”.

I, attempting to control my incredulity, answered him, by explaining that America is not Europe. 75% of Americans still proclaim themselves to be Christians, while Europe has abandoned both their Faith and their backbones, and are being invaded by Muslims, who are bringing their Sharia Law, with them.

You often hear of the activists, who are a part of the 24% of Americans, who identify themselves as “Liberals”, referred to as the “Hive-mind”, because most of the time, they present themselves in public and on the internet, including Facebook Political Pages, as being in lockstep with one another, regurgitating “the Party Line”, about each and every Hot Button Political Issue, resembling the brainwashed Proletariat of the old Soviet Union.

The actions of North Carolina and Mississippi, goes against the unified thought process of Liberals. American Individual Freedom of Thought and Traditional Morality and Value System of America, instilled in the majority of Americans, by American Christianity.

Traditional American Morality and Values are a roadblock to Progressives’ Plans, as regards to the “Good of the State”.

So, when you see Liberals Musicians like Bruce Stringsteen and Bryan Adams cancel concerts in North Carolina and Mississippi, and Corporations expressing their “concerns” of the passage of these laws, it is all a part of a concerted effort to get us “all in line”.

Unfortunately for those who expouse the “singularity of thought” of the Hive-mind, they will never win.

We are Americans. We cherish our Faith, our Families, and our Freedom of Thought.

We will not be assimilated.

One thought on ““Mommy, There’s a Man in the Bathroom!”: The Progressive War Against American Freedom of Thought”