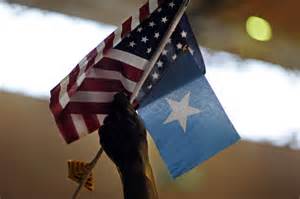 Has Minnesota, “the Land of Nice”, become a breeding ground for ISIS Volunteers?

Three men accused of trying to leave Minnesota to join the Islamic State group have not renounced the group’s violent ideology, and proposals for their pretrial release won’t adequately protect the community or guarantee that they’ll show up for court, prosecutors said in a court filing Tuesday.

The document was filed in advance of Wednesday hearings on defense attorneys’ proposals to release Hamza Naj Ahmed, 21, and Zacharia Yusuf Abdurahman and Hanad Mustafe Musse, both 19. The men, Americans of Somali decent, are among seven people recently charged with plotting to join the terror group in Syria.

The proposals were crafted by the defense with input from Somali community members and religious leaders. They include options for housing, religious education, volunteering and other activities that defense attorneys say are designed to steer the men in a positive direction, assure the community’s safety and ensure the men attend court hearings.

“Jobs, family, school and attendance at mosque did not stop the defendants from trying to flee before, and will not stop them from trying again,” Assistant U.S. Attorney Andrew Winter wrote.

Winter said the proposals are untested, and community members who agreed to participate have no experience in supervising terror suspects.

“It is the dangerous intentions of the defendants themselves that concern the government here. Indeed, there is no evidence that the defendants are seeking intervention — rather, it is being foisted upon them by other well-intentioned individuals,” Winter said.

U.S. District Judge Michael Davis, who invited attorneys to come up with the community-involved plans, will consider the proposals Wednesday.

The plan for Abdurahman includes regular counseling from an imam and three elders at a mosque that preaches against violent extremism, along with opportunities to work with children and to resume classes at a community college. Ahmed’s and Musse’s plans have similar options.

Sheikh Abdisalam Adam, the imam at another mosque, said he views the men as victims stuck between cultures and searching for identity. Adam has filed papers supporting Musse’s and Ahmed’s plans and says his goal is to “try to redirect their desire for meaning and social engagement into something more productive here at home.”

However, Winter noted the men took extraordinary steps to join the Islamic State group even while they knew they were under FBI surveillance. Winter also cited a conversation in which Abdurahman allegedly told an FBI informant about his stance on efforts to de-radicalize him.

In that March 15 conversation, Abdurahman said another man who tried to go to Syria — and later pleaded guilty to a terror charge — was participating in a de-radicalization program as an experiment.

“With me, all of us, we’re hopeless, we’re not gonna be in a program, bro. We will straight up serve time,” Abdurahman allegedly said. “They know they cannot change you. Because you’re an adult, you know.”

Authorities say Ahmed, Abdurahman and Musse took a bus from Minneapolis to New York City in November and were stopped at JFK Airport before they could travel overseas. Ahmed was arrested in February, and Musse and Abdurahman in April.

Investigators have said a handful of Minnesota residents have traveled to Syria to fight with militants. Since 2007, more than 22 young Somali men have also traveled from Minnesota to Somaliato join the terrorist group al-Shabab.

As many as 15 Somali-American men have left their homes in Minnesota in recent months to travel to the Middle East and join up with ISIS, the jihadist army at war with Syria and Iraq, according to Minnesota Public Radio.

The fighters appear to have made the decision to go fight with Islamic State of Iraq and Syria/Levant while the terror group was fighting to overthrow Syrian dictator Bashar al-Assad, but some may now be in Iraq, where the marauding group is seeking to topple Baghdad.

“A Muslim has to stand up for [what’s] right,” Abdirahmaan Muhumed told MPR News through a series of Facebook messages dating back to the beginning of the year. “I give up this worldly life for Allah.”

Among Minnesota’s thriving Somali community, Muhumed’s transformation from ordinary life in Minneapolis to Middle East jihadist is evidence of a strong recruitment and radicalization effort.

“Most of [those who left] don’t have the resources to even buy a ticket to go to Chicago. So that means there is some influential individuals who are taking advantage of our youth,” Mohamud Noor, executive director of the Confederation of Somali Community in Minnesota, told MPR. “So it’s up to us to defend ourselves. This is not only a fight for our youth. It is a fight for our future.”

It is against the law for Americans to independently travel overseas to fight in civil wars or armed conflicts against foreign governments. FoxNews.com has written about Americans who went to join the war in Syria in the past, including Eric Harroun, a onetime U.S. Army soldier from Arizona.

After FoxNews.com interviewed Harroun from the battlefield, he traveled back to the U.S., where he was arrested in June 2013. He pleaded guilty to lesser charges and was released, then died of an apparent overdose in April.

FBI officials in Minneapolis told MPR News that as many as 15 Somali-Americans left for Syria in recent months, and that the agency is investigating.

Somali-Americans left Minnesota in previous years to fight in their homeland, but friends and family told MPR they don’t understand why the men would go to a place to which they have no connection.

“It was really hard for me to believe because the guy seemed he was busy with his own life, trying to make it,” Abdinasir Mohamed, a friend of Muhumed, told MPR. “And [for] him to leave his family and kids, and just go to the other side of the world, that was really surprising to me. I’ve not really expected him to do that type of move.”

Muhumed said in Facebook messages that ISIS is “trying to bring back the khilaafa,” a reference to an Islamic empire. He also said “Allah loves those who fight for his cause.”

The report also cites the case of Abdi Mohamud Nur, a 20-year-old Somali man from Minneapolis. Nur’s sister, Ifrah, told Voice of America on June 1 that her brother also went to Syria to fight with ISIS.

FBI investigators aim to discover who is recruiting the Minnesota men, said Kyle Loven, an FBI spokesman in Minneapolis.

I sense a pattern…

While Modern Liberals, including Obama, are wrapped up in worrying about who’s sleeping with whom, and who is flying the Confederate Battle Flag, Radical Muslims are living among us.

While I have met some very nice American Muslims, I have also been inside a mosque where I was looked at as if they wanted to take a scimitar to my neck.

If Moderate Muslims are not behind their radical brethren’s eternal jihad against us infidels, they need to get their mugs in front of the cable news networks’ TV cameras and say so…because all I see representing them when I turn on the news, are the abrasive members of CAIR, blaming America for all the world’s troubles.

When Obama embarrassed himself in front of the entire nation, on the morning of the National Prayer Breakfast, when he told the 75% of us who are Christians, that we should all “get down off of our high horses” and accept the fact that we, as Christians,  are just as guilty of violent acts as Muslims, he ignited a political firestorm, which has since had gasoline poured on top of it, by Former New York City Mayor Rudy Giuliani remarks, questioning Obama’s Christianity and Patriotism.

So, while Liberals are trying to erase the history of the Confederacy and redefine marriage, home-grown Radical Muslims are being trained and nurtured by their mentors to carry out jihad against us.

Unlike the harmless Direct TV Commercial, featuring “Bad Choices” Rob Lowe, which Liberals succeeded in taking off the air, the Administration’s BAD CHOICES, regarding their dealings with the radical followers of Mohammed, could end up being the death of us all.

One thought on “Does Minnesota House ISIS’ “Farm Team”?”